I’d bet a million bucks that Survivor‘s Lydia Meredith wishes she had an hourglass of her own.

In Wednesday’s episode, Lydia became one of five unlucky castaways to have her hard-fought immunity win stripped from her after Rocksroy opted to smash the hourglass on Exile Island. As a result, only Lydia, Maryanne, Jonathan, Hai and Lindsay were available targets at Tribal Council, where Hai decidedly turned against his Vati bestie and helped blindside the server from Virginia. (Read a full recap here.)

Here, Meredith talks to TVLine about the ins and outs of the hourglass twist, her relationship with Hai and the “amazing move” by Omar which led to her ejection.

TVLINE | How did it feel to miss making the jury by one single Tribal?
LYDIA MEREDITH | It was sad. I think it wouldn’t have been as much of a blow if I was a part of the jury, especially because it felt like a merge. It totally did. But, yeah. It was unfortunate for sure.

TVLINE | When I spoke with a few members of the 41 cast, there was legit anger and resentment over the hourglass twist. What were your initial thoughts when Probst broke it all down for you guys?
I was kind of confused. I actually thought [Rocksroy] had immunity regardless, so when I found out he didn’t, I was like, “OK, then what was the point?” The theatrics of it, I was like, “Alright, why?!” [Laughs] I think the blow wasn’t as bad because people did predict it. It was definitely talked about like, “Oh, I bet he could probably switch the [challenge] results,” which definitely skewed my view of it. I was mentally prepared for it, but was still kind of in denial. I literally kept saying to myself, “No, we won. We won immunity.” You saw me show up to the challenge wearing my glasses. I’m not in my challenge outfit. I was like, “I don’t want to compete today! We already did all that effort. I don’t want to do this!” Also, I don’t really get angry at things. I’m not an angry person in general, but in hindsight, I feel like I should’ve gotten a little bit angrier because, wow, it really did suck. And of course, the extra little dagger of them cheering as I was walking out. I was like, “Cool, cool, cool.”

I definitely don’t think [the show] should do it again. I know they made tweaks, but they weren’t real tweaks. It would’ve been a different conversation if [Rocksroy] was automatically immune, because then it’s skewing the results in the way that you want. It just sucks. It really is unfortunate. I hope they don’t do it again. Like, ever. Also, I don’t think they can at this point because you’d have two tribes trying to throw a challenge. [Laughs]

TVLINE | Tell me about those first few hours of the merge. How long did it take for things to get wild?
Instantly. Oh my gosh, I remember us all hugging and we were so excited. We met each other, it was awesome and immediately it was like, “Alright!”… [then everyone was] GONE. We were at the Vati beach, and I remember feeling like there were so many people there. Everywhere I turned! Everyone was walking everywhere — it was chaos! Before it got real, it was lovely. I’ll cherish those two days that I had with everybody. [Laughs]

TVLINE | Hai was your No. 1 out there. Tell me a bit about your relationship and why you two were drawn together?
It was just an instant connection. We just vibed on a level. From Day 1, we immediately started talking. In a game where it’s fast, you really want to make those alliances Day 1. I felt so excited like, “Alright, I’m playing Survivor, I’ve got an alliance, let’s do it!” Then luckily, we didn’t go to Tribal until Day 7, so we had lots of time to just hang out. But you don’t know who’s exactly with who until Tribal. And obviously you’ve seen what happened in our first Tribal which was just nutty! 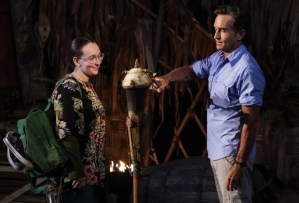 TVLINE | Now, Hai wrote your name down. How did that feel, and how are you feeling about that today?
It was honestly just confusing. Why push so hard when you’re going to toss me away? In his eyes, I could’ve just been a number. Like, “Oh yeah, she’s in my pocket.” I truly just think he had better options. It seemed like I was always disposable. We were a fractured tribe already, [but] I didn’t think it was going to happen so soon. I was really trying to just make the merge. I wasn’t trying to play a crazy strategic game to begin with, because you saw what happened with Daniel. You’re done! It was just confusing. Why work so hard and then just toss me out? [Hai] should’ve just kept Jenny at that point. It is what it is.

TVLINE | Talk to me about this seemingly pivotal conversation you had with Omar, which based on the edit, seemed to give him everything he needed to flip the script on you. Did you feel like you gave away any powerful info there?
I totally didn’t! I literally was like, “What did I say?” I didn’t think I said anything. I said I’d go with the majority of eight that he was in. That was all Omar. He totally twisted it. Amazing move on his part! He wasn’t going to let his allies go, and of course, like Hai did for me earlier, Omar worked everybody else. Also, he didn’t even have a vote! It was an amazing play. I give all the credit to Omar that he got everybody to go against me. Because of the twist, I wasn’t really on anybody’s radar. I really wasn’t. But then of course, there’s only five of us out of 12 to vote for, so automatically I was worried.

TVLINE | Why did people not want to vote Maryanne? Were they convinced she would use her idol?
I don’t think so. I don’t think [Taku] was going anywhere. Those four were very tight, and I think they were trying to make it seem like they weren’t. After that vote, it really solidified them as a four. 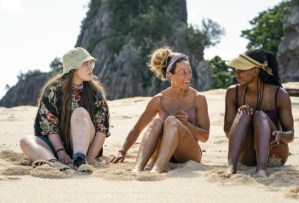 TVLINE | How did you feel about your edit this season?
I feel I was a little under-edited. I didn’t even get to speak in that next episode after I almost went home. I was like, “Where did my narrative go?” I gave them a lot of good stuff, but also, I can’t complain. I still got an amazing edit. I’m still happy. My fans have been amazing. It’s been so much fun. But I definitely feel like there were portions where my thought processes didn’t get shown. [Other] people were saying my narrative. I wish it could’ve been me talking about it, about my own almost-vote-out, but it is what it is.

TVLINE | Even though you went out a tad early, did you still get what you wanted out of your Survivor experience?
Yes. I literally cannot complain. I had so much fun. I have amazing friends for life, and I definitely came out of it like a different bitch! I stripped everything away and I couldn’t be happier.