We’re all fully aware that we’ve now entered a “new era” of Survivor, but there’s one thing I just can’t seem to figure out: Why can’t these people keep their traps shut?!

Another beware advantage was found in Wednesday’s episode, and like clockwork, the beans were spilled almost immediately. Maryanne dug up the prize at Taku, but as soon as she secured the goods, she blabbed to her tribemates in astounding fashion. Don’t these players realize that sharing these secrets takes the wind out of their sails? These bonus goodies should enhance a person’s individual game, and well, we all know what loose lips tend to do. (Make it make sense, fellow Survivor fans!)

Alright, enough of my griping because Maryanne’s new secret phrase (more on that later) wasn’t nearly the juiciest fiasco of the hour. Ladies and gents: We almost had a rock draw at Tribal Council, which led to the season’s most surprising vote-off yet. Let’s get to recapping already!

TAKU | Maryanne told the rest of Taku about her extra vote, and while the tribe is pleased to be four strong, they decide to embark on a group idol hunt to find whatever other hidden treasures lurk at their beach. Maryanne then finds the aforementioned advantage, and of course tears right into that bad boy. Her secret phrase: “It’s another classic case of the bunny rabbit having dinner in the mailbox.” (I both love and hate these silly phrases.) But her reaction to learning she can’t vote: “Fudge!” (Bless her heart.) She proceeds to tell everyone she found it and that she can’t vote. Sigh.

VATI | Daniel (who Mike calls “neurotic”) is itching to read the fine print on Mike’s beware advantage. He learns that if all three pieces aren’t found by the merge, the vote penalty ends and the idol gains full power. It seems, so says Danny boy, that those details might have just saved Mike’s life in the game. But when he returns the idol package to his tribemate, the idol and its paperwork are gone! Was Daniel trying to pull a fast one on Mike? Nope! He just dropped it on the ground, causing poor Mike to almost stroke out.

What is with this tribe and constantly losing this idol? First Mike, now Daniel? Mike might as well just hang it around his neck for all to see, ’cause otherwise, he’ll probably wind up misplacing the dang thing before he can reap its benefits! “Oops, we lost the advantage… again!” Unbelievable!

IMMUNITY IS BACK UP FOR GRABS | Maryanne goes off on her bunny tangent which makes her sound even crazier than she is (in a good way — no shade!), but Mike remains mum. He knows she uttered a secret phrase, but he’s keeping his cards close to his chest. Since Ika doesn’t utter pure nonsense, he wants to keep his a secret on the off-chance that he can make the merge with a full idol in hand. Can’t blame him.

For the challenge, players must dive out to untie a ladder from the ocean floor. Using the ladder, they must retrieve a key and sandbags, then land the bags on a series of five targets. They’re also playing for reward: First tribe to finish gets a Survivor toolkit and fruit. Second tribe to finish gets smaller versions of each.

Before the challenge even starts, the ocean is looking rough. The players can barely stand on their platforms because the swells are rockin’ so hard. Once they’re in the water, some castaways can barely stay afloat. As Vati struggles to untie their ladder, Jonathan grabs the ladder and his struggling team members by himself, letting Taku take the lead on the sandbags. Taku wins the challenge before the other two tribes can even make it out of the water. There might not even need to be a Tribal Council, because it looks like someone’s going to straight up drown any second!

After a slo-mo montage of Vati and Ika riding the struggle bus, Jeff calls it off and orders them to shore. Teams bring their ladders to the sand, as production kindly gathers the keys for both tribes, but the challenge is still very much alive. The teams still have to get the sandbags and toss them onto the targets. It’s back and forth leading to a 4-4 showdown, but Drea nails Ika’s final toss, sending Vati to their very first Tribal.

Taku swaps their fruit reward for fishing gear, then must select two players to go on a journey. They choose Chanelle and Omar. 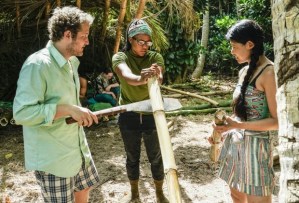 VATI | Mike and Jenny hope to vote Lydia out, assuming that Chanelle will vote with them. But Mike doesn’t have a vote, so they wonder if the “squirrely” Daniel will follow suit. Meanwhile, Hai, Daniel and Lydia discuss targeting Jenny, also assuming they’ll have Chanelle on their side. But Daniel squeals to Mike and Jenny, offering his allegiance to them. All eyes are going to be on Chanelle… if she even has a vote.

TREK | Chanelle tells Omar up front that she can’t risk her vote since she’s heading to Tribal later that night, so when they separate for their big decision, Omar assumes she’s going to protect her vote. But then she goes and does the exact opposite, and risks her vote! Now Mike and Chanelle won’t be able to vote tonight. This is a huge flub on her part. She should’ve known Omar was bound to risk his vote given the conversation they just had. What a huge oversight that’s about to have some serious consequences for the Vati tribe.

VATI | Chanelle returns to camp, and tells Daniel that she might not have a vote. They want to get Lydia out, but now they have to trick Lydia and Hai into splitting their votes. When the plan is pitched, Hai notices a change in Chanelle’s demeanor, and you’ve gotta give it to the guy. He can apparently read people. 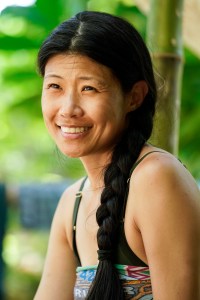 TRIBAL COUNCIL | Despite the fact that everyone wants to believe they’re a united front, they know things are about to get real. When it’s time to vote, Chanelle learns her fate, leaving only four tribe members to vote. The results: It’s a 2-2 tie between Jenny and Lydia. On the revote, only Hai and Daniel’s votes count. Jeff reads ’em again: Another tie.

Hai’s mind is blown. Jeff tells them that if they can’t come to a unanimous decision, Jenny and Lydia will become safe, and the other four will draw rocks. He makes Mike and Chanelle reveal that they lost their votes, and says that while they can try to influence the decision, the tribe’s fate lies squarely in the hands of Hai and Daniel.

Daniel says that he really, really doesn’t want to draw rocks. Hai admits that he voted for Jenny to protect his ally Lydia, while Daniel tries to blame his vote on Chanelle, and asks her who she wants gone. Everyone starts bickering and talking over each other, but Hai digs his heels in: He’s not changing his vote, and he’ll draw rocks if he has to.

After Hai and Lydia promise not to hold his original vote against him, Daniel’s fear of rocks causes him to give Jenny the boot, and she becomes the first member voted out of Vati. (Read our Q&A with Jenny here.)

We love to see the fireworks, but did Vati make the right decision? What would you have done? Let us know your thoughts in the Comments!