It may have only been Vati’s first time at Tribal Council, but that didn’t stop it from erupting into beautiful chaos.

In Wednesday’s episode of Survivor, Chanelle was sent on an advantage trek which led to another lost vote for the tribe. With only four votes cast, a tie between Jenny and Lydia almost went to a rock draw, until Daniel ultimately flipped sending creative director Jenny Kim home to save his own hide. (For a full recap, click here.)

Below, TVLine talks to Kim to break down Chanelle’s game-changing (and mind-boggling) decision, that bonkers Tribal and whether she could’ve done anything at all to survive the vote.

TVLINE | I never would’ve guessed that you’d be the person I’d be speaking with today!
JENNY KIM | I appreciate that! You shouldn’t be speaking to me. You should be talking to someone else. Maybe it should’ve been Daniel here! [Laughs]

TVLINE | Chanelle’s trek pretty much sealed your fate. What did she tell you guys when she came back from her journey and what did you know going into Tribal?
When she came back, she said the same story I had told when I went on my summit. I came back to the tribe and told the complete truth. I didn’t risk my vote, so I felt no reason to lie about what that summit was, and I knew that people would probably go on it later. So Chanelle comes back and says, “Yeah, I did exactly what Jenny did. I knew I couldn’t risk my vote. That would’ve been stupid.” But she made one little change. She said that if she risked her vote, she would’ve lost her vote for two Tribals. We also told her before she left, we whispered in her ear: “You can’t lose your vote. Don’t lose your vote!” So she went there knowing she shouldn’t lose it, she shouldn’t risk it. I don’t know what came over her and why she went ahead and did it anyway, but she did and I am sitting here today because of it. Thank you, Chanelle! [Laughs]

And going into Tribal, I did not know Chanelle had lost her vote. She only shared that with Daniel. I thought that maybe we were fine, but I was definitely nervous. There was no time to talk to her either. She came back and had to give a confessional, and then we went to Tribal Council, pretty much. There was no time to feel her out, but I knew there was a chance that she had risked it.

TVLINE | Were there any other conversations on the beach before Tribal that we didn’t see that may have factored into how everything shook out?
For sure. Hai, Mike and I had a conversation. We were never working with Hai, but what we wanted was for Hai to throw Lydia’s and Daniel’s names out. Which he did. That way, I knew I could at least take that information and try to further to solidify my alliance with Daniel so that he would vote with me. I said, “Hai threw your name out there, but we’re good. I’m telling you: Don’t trust Hai. You can’t trust him.” Later on at Tribal, what they don’t show is that Daniel told Hai that I said that. At that point, I knew my game was sunk when Hai had more information than he should’ve because Daniel should’ve kept his mouth shut.

TVLINE | Before this whole Tribal Council fiasco, what was your opinion of Daniel, and what was that relationship like?
Daniel and I got along really well. I honestly felt like he was squirrelly and a little insecure — he was really insecure about his shoulder, that popped twice. They didn’t show it pop right before the dragon puzzle we did, but he had a dislocated shoulder then too. He was feeling uncomfortable and insecure, and Mike and I just thought, “Keep him comfortable and we’ll have a loyal partner here if we make him feel safe.” And that was our actual intention, to keep him safe. I liked Daniel in a lot of ways. I didn’t trust him fully, but I knew that Mike did and that’s sort of what the dynamic was. Chanelle and Daniel were in the middle, but I was bonding more with Chanelle and Mike was bonding more with Daniel. So in that way we became a foursome that didn’t last long. 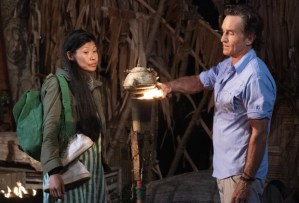 TVLINE | Hai got a pretty decent edit in last night’s episode. Was he ever on your radar? What was your take on him?
Hai had no idea what was going on! Hai thought for sure he had the majority. When it came back with a 2-2 tie and then a 1-1 tie, he had no idea what happened. That moment where he says, “Where are all the votes?” I look at him and I’m like, “Why don’t you know?!” Immediately, I realized Chanelle lost her vote and I couldn’t believe it. Hai just thought he had the easy majority. I know that Chanelle and Daniel made him a little bit paranoid with all of the information they were sharing with him, and from the edit it looks like all of the things that Chanelle was saying made Hai not trust her. He didn’t really know, but it seems like he had good intuition, so I’ll definitely give him credit for that. Chanelle and Daniel wanted Hai and Lydia to split the votes, as we saw, and ultimately they didn’t because Hai got spooked. He made the right call to tell Lydia, “No, we’re both voting for Jenny,” so good for him for that.

TVLINE | Taking your whole experience into consideration, what was the most surprising aspect of Survivor 42 for you?
So many things! This is not the game that I was prepared to play. It felt like a game of Roulette to be totally honest. You throw all of these advantages — not really advantages, disadvantages — at us, and it’s a total crapshoot! That’s what was surprising to me, the strategic component… having a majority means less now in a lot of ways. It’s just about having the right people. If I were to do it again with this sort of “new era” type of game, I would go about my social connections differently. People always say, “You have to play as well as you can with the cards that are dealt to you.” Well, yeah, but what if you’re dealt cards and with every single new move, your cards are taken away and constantly reshuffled and redealt, so your placement can never have a solid foundation?

TVLINE | Had you known what the season was going to look like, would you have risked your vote?
Our tribe was way too split apart at that time. It was Day 2, and I didn’t know exactly where Chanelle and Daniel were going to go at that point. I was like, “I need my vote.” I’m actually glad now that I protected my vote because had I not, it would’ve been an easy 2-1 vote-out for me. At least I almost got it to a rock draw in a pre-merge Tribal Council.

TVLINE | Any regrets or anything you could’ve done differently to prevent this?
I don’t believe in regrets. I did what I could with the read that I had on people. Chanelle risked her vote. What could I do about that? Mike lost his vote because he had that beware advantage. Daniel shared all the information because he thought that was smart. I can’t control it. That’s the thing about Survivor. People kept asking me before I went out there, “What’s your strategy? Do you know how you’re going to play?” You can’t know exactly what you’re going to do. There are 17 other variables, 17 other players who are playing this for themselves. You don’t know that they’re always going to make decisions with your best interests in mind. 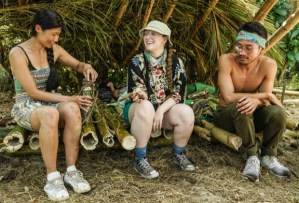 If I were to do it again, I probably would’ve pushed harder to have more of a relationship with Lydia. Lydia ran away from me a lot. We would talk socially, but when it came to real gameplay and strategy talk, she was literally running away from me. I saw her back as I would try to talk strategy with her. If I were to do one thing differently, I might’ve put more pressure on her, but it’s also hard to put pressure on someone because you worry about them crumbling and running off to their actual alliance. You’ve gotta read the room, you’ve gotta make a gut decision. Knowing what I know now, I would’ve pushed Lyria harder, but in the moment, it was really hard to do that.

TVLINE | If there’s another Second Chances season, would you play again and would you approach the game differently?
Hell yes. If I’m asked back, I’m there 100 percent. I don’t feel like I got everything out of my system that I wanted to. I wanted to come home feeling depleted, like I gave everything, but my time was cut short. So yes, I would completely go back. Knowing what I do now — new era, everything’s different, everything’s a game of Roulette — I think that I would probably work harder to have more strategic connections with everyone, but again, it’s really hard to say, because if you do that, you look sneaky and people distrust you. You’ve gotta read the room and hope you read it right. But I would go again!