Though it may have been a shorter game than usual, it was still a long road to victory for the newly crowned winner of Survivor 41.

After a twist- and advantage-heavy season that gave players little-to-no food and minimal supplies, Xander Hastings, Deshawn Radden and Erika Casupanan battled their way to Day 26 to secure their spots in those Final 3 seats. But after pleading their case to the jury, it was former Luvu member Erika who pulled away victorious, thanks to a 7-1 vote in her favor. (Click here for a full recap.)

Below, Casupanan talks to TVLine about keeping her epic win a secret, the cons of Luvu’s winning streak and how Deshawn’s “truth bomb” nearly destroyed their real-life friendship.

TVLINE | So usually the Final 3 doesn’t learn the outcome until the live reunion, but you knew this whole time! How hard was it to keep that secret?
ERIKA CASUPANAN | It was hard, but I think it was also fun. I actually didn’t tell anyone in my life aside from my therapist. My parents had no idea. I didn’t tell them anything about the show, so every episode they’d be sweating thinking I was getting voted out when I knew fully well that I was going to win. It’s been a fun secret to keep for the last few months, but I think once it finally came out, similar to what Xander said at the final immunity challenge, it was like a big exhale. Now I get to share the big news with everyone… finally!

TVLINE | How surprised were you when Xander kept you safe from the fire-making challenge?
I was shocked when he initially told me he was keeping me! Xander and I had a close relationship in the game, and we talked a lot about what final Tribal configurations we were interested in, so he always knew where I stood, and I felt like I knew where he stood. But at the same time, it’s a game. We always talked about going together, so when it came time for me to sit down and make my pitch, I just said, “Dude, you know how I feel. I respect that you won, and you can do whatever you want.” I’m thinking, “Come on, he has to throw me in,” but then he didn’t! I was ready for him to pull a fast one on me, so I wasn’t ready to accept that I was going to the Final 3 until I saw Heather and Deshawn sitting at the fire-making station, striking the flints.

TVLINE | Going into final Tribal, what did you think your odds were to win?
I felt confident that I would be able to make my case for why I should win the game, and why I played the way that I did and how I did what I set out to do. But the day of final Tribal, I actually broke down alone in the woods. If you’re one of those people who’s had imposter syndrome, just imagine coming so close to making your dream come true and having that doubt come over you at the eleventh hour. I also thought a lot about how, once again, one woman was going to final Tribal with two men. We know with the recent history of newbie seasons, women in that position get zero votes. I knew how much people wanted a woman to win, I did what I think I needed to do to win, but what if I get to the end and I’m not able to pull it off, and we have to wait another season to finally see a woman win [again]? I put a lot of pressure on myself, but once I cried it out, I was like, “OK, that’s out of my system. Now it’s time to go and kick some ass.” 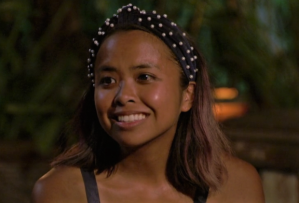 TVLINE | And that you did! So, I’ve spoken to a lot of your castmates and a couple of them had some serious issues with the hourglass twist. What are your thoughts on it, and if you had been on the other side of the twist, how would you have felt about it?
As Jeff was explaining it to me, I was thinking, “This is nuts! You mean I get to take away a win that people earned?” Even though it benefitted me, I was thinking, “Wow, Survivor is really trying something new with the format if they’re willing to put something like this into the game.” As a longtime viewer, it was definitely a surprising one. But even looking at pre-merge and how much had changed — how we weren’t getting great rewards, how almost every day someone was being sent to climb a hill and get some type of advantage — it’s not really a surprise that something major that we didn’t anticipate was thrown into the game. Even if I was on the other side, I would’ve been initially shocked, but then thought, “OK, this is what’s happening this season.”

TVLINE | If there was no hourglass twist, do you think you would’ve been voted out that night?
If the hourglass twist didn’t happen and I was out of the game for two days unable to talk to anybody or build any connections of my own, of course, I’m toast! All of these people are on edge because they just merged. They don’t want to be the merge boot, so of course they would target the person who’s not there. Hello, it’s a no brainer! But my theory is if there was no hourglass, there probably wouldn’t have been a two-day exile, and I probably would’ve been on the field with the rest of the players, and who knows what would’ve happened.

TVLINE | In the beginning of the game, do you think the fact that Luvu didn’t have to go to Tribal Council at all hurt the tribe in the long run, or maybe gave you a slower start to your game than other players?
For sure. I think when you’re always winning, the pro is that you’re safe, but the problem is you don’t know where anybody stands. You don’t have the opportunity to prove loyalty, and by the time you get to the merge, you realize you’re not as experienced in scrambling as everyone else. It really did give me a bit of a slower start. I went into the game intending to be at the bottom of the majority alliance, but still be able to talk to whoever was on the bottom. But on Luvu, even though I felt like I had gotten myself into that position initially, we never had to vote, and the social dynamics started shifting around. Once I got to the merge, I got a fresh start and used that strategy for the first couple votes and eventually worked my way up.

TVLINE | What’s an aspect of your game that you wish made the edit but didn’t?
I think with the way I played, it’s probably a harder story to tell on TV. As a communications manager and someone who’s worked on building reputations for businesses and clients, I know that with building credibility, it’s a lot of small things that add up over time to help create an image. All the times that Xander and I would walk in the woods, I’d tell him, “I think we have a great shot sitting next to each other because we’ve played different games, but we’re equal competitors.” Almost every day, I talked about how he and I stood an equal chance against each other. That could’ve influenced why he didn’t put me in fire-making. There are small things like that. Even subtle decisions I made in terms of body language or how I presented myself. I wore pigtails every day so I could look like a little kid. I would go to Tribal Council and make my body language really small so I wouldn’t be seen. Those are the things that are harder to show on TV, but they helped me fly under the radar. 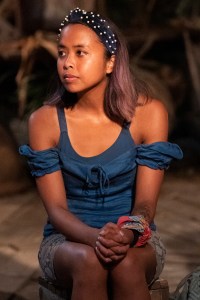 TVLINE | You survived Deshawn’s truth bomb, but when you got back to camp, what was going on in your head?
What was shown on TV didn’t scratch the surface. There was a lot more to the truth bomb than people saw. There was only one major truth spilled in terms of how I was considering voting out Heather, but there was a lot more unwarranted garbage that was directed toward me that I had to endure, yet I remained as composed as you saw on TV.

When I went back to camp, it was one of the lowest nights of the game for me. I’m super pissed, I don’t want to speak to Deshawn, I saw Xander congratulate Deshawn for doing that, and I’m thinking, “What the f–k, Xander?” Heather’s really upset and doesn’t want to speak at all. Ricard and I talked for a little bit, but he ends up going back to everyone saying I was crying, even though I wasn’t. It’s very damaging for a woman to be described as emotional when she’s not. Even though I was surrounded by people, I felt so angry and so alone. I remember going to bed in the dirt on this new island thinking, “F this. I’m gonna go win this f–king game.”

TVLINE | Any details on that “unwarranted garbage” you can fill in for us?
I mean… I don’t know if I want to go into specific details, but it got pretty brutal in terms of the volume of what was being directed to me. It severed the friendship I had with Deshawn. Even after the game, I was so angry. There was definitely a point in time where he and I thought that we weren’t ever going to speak again. We had a real friendship out there, and it really ruined us for a while. After a few months, we ended up talking about it. I give Deshawn a lot of credit. He approached the conversation with a lot of humility and a lot of accountability , so we were able to get past it. I think Deshawn is a good person, I think he just did something stupid at Tribal Council.

TVLINE | Gameplay aside, was there a funny or meaningful moment you wish was shown on TV?
A funny moment from the new island we got put on… I don’t know if anyone from production knew ahead of time, but I’m really terrified of birds, and this new island was overrun with these giant Fijian black birds that are endangered. They don’t have any natural predators, and they think they’re invincible. They just ran around in the middle of the night, and they’re not afraid of you! At what was probably about 3 am, they start screaming like babies, so on top of us being on this new island and having just endured the truth bomb, I’m scared s–tless of these birds that are running around. I thought, “Luckily, there’s only a few more days left,” because I think if I got put on that island sooner, I would’ve had to take myself out of the game. [Laughs] I couldn’t do it!