Survivor 41‘s Final 5 are so close to the end they can taste the money. But with two challenges, two Tribal Councils, a fire-making showdown and another twist “they will never see coming,” these Sole Survivor hopefuls still have plenty of work cut out for them.

Wednesday’s season finale continued putting its players through the wringer, as the tribe was forced to move to a new island with (once again) no shelter and zero food. But with the end of the game in sight, Erika, Deshawn, Heather, Xander and Ricard were hungrier than ever to score a seat in the final and plead their case to a jury of their ousted peers. So who survived to the very end, and more importantly, who won the bragging rights and a million dollars? Let’s recap!

The players arrive to their new home and find lit torches, one pot and little else. After last week’s hectic vote-out, Deshawn asks Erika if she wants to talk. She’s not ready, she says, but slips in a “you’re welcome” for keeping him. Deshawn isn’t sorry though: He’s on the bottom, and his goal was to pull her down to his level and cause some rifts. (Don’t hate the player, hate the game!) But she’s frustrated, and that’s understandable.

The next morning, Erika asks Heather to rate her anger on a scale from 1-10. Heather’s response: “No comment.” (Ouch!) Erika and Deshawn finally chat. He reiterates that it wasn’t personal, and that he didn’t intend to hurt her. But Erika tells us she doesn’t see how they can move forward from this, even though she originally wanted to keep him around. 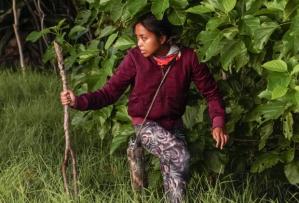 ADVANTAGE CLUE | Each person receives an envelope, and it’s a race to unscramble a phrase and to find the advantage. Xander cracks it first: “Your treasure hangs where the trees love to dance,” and the “million-dollar egg hunt” begins! Even though Erika is last to decipher the phrase, she’s first to find the advantage, which will give her a leg up in the next immunity challenge.

CHALLENGE #1 | Players must navigate a series of obstacles, collecting puzzle pieces along the way. Then, they must complete a 75-piece puzzle of the 41 logo. They’re also playing for steak, veggies, bread and wine, which sounds crazy delicious, and I’m not even starving. Erika will start with four rungs already completed on each of her ladders. Not shabby.

Thanks to her advantage, Erika’s first to the puzzle, and though Ricard puts up one hell of a fight, she wins the challenge and chooses Heather to join her for lunch.

REWARD | Erika apologizes to Heather through tears, hoping she didn’t ruin their “unlikely friendship.” But Heather says she was mostly hurt by the way Deshawn displayed it to everyone, and she has no hard feelings toward Erika. The two make amends, and debate whether they should get the biggest threat out (Ricard), or get their revenge on Deshawn (which, to be clear, would be STUPID. If they don’t get Ricard out now, they all deserve to lose to him.) Meanwhile, Xander considers listening to his heart and keeping his friend Ricard — and possibly saving him with his idol! — but hopefully he comes to his senses. It’s a million-dollar gamble that he’d be dumb take.

TRIBAL COUNCIL #1 | Jeff asks the group if Ricard is everyone’s main target, but Xander hints that it may not be a done deal. Ricard admits he’s been struggling hard and nobody knows; his new baby is due in a week’s time. Xander says he and Ricard have “a bit of a bromance,” and he sympathizes with his friend who now has his back against the wall. But Ricard refutes the fact that he’s running the show, saying if it were true, Deshawn would already be gone, and he’d be sailing Final 4.

It all comes down to Xander’s idol, and when the time comes, the former Yase member hands it over to Jeff and plays it for… himself. The votes are read and Ricard is, indeed, ousted 4-1.

GAME ON | The Final 4 get back to camp just in time for a huge lightning storm. With no shelter to hide in, they’re forced to creep into the jungle, but it does little to shield them from the weather. The sun comes up and everyone’s looking rough. While Xander restarts the fire, Deshawn tells us that he’s failed to make fire with flint multiple times before. His only hope: He needs to win the last immunity, or he’s cooked. 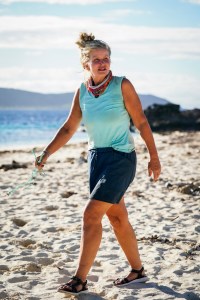 IMMUNITY #2 | For their last challenge, players must navigate a curved walkway while stalking blocks on a wobbly platform that spell out “Final 3.” The winner will obviously be safe, but will also decide who to bring to the final with them, and who to toss into a fire-making face-off.

As Erika and Deshawn both drop, Xander takes the lead. With only one block left, Xander steadily places it and walks backward to secure the win.

ONE-ON-ONES | Deshawn tries to convince Xander that Erika would be tough to beat. Heather tells him the same. When he finally meets with Erika, he straight up tells her she’s safe. (Hmm.) He believes he can beat her, but he doesn’t want to give her the chance to have a flashy, game-defining moment in front of the jury. (Honestly, I can kind of see the logic there.)

FIRE-MAKING | When it comes time to make his call, Xander sticks true to his gut: He declares Erika safe and says that Heather and Deshawn will be the ones making fire.

Deshawn is first to get a flame, and does a nice job of building his fire… at first. Heather finally gets something going, adding stick by stick, just as Deshawn accidentally smothers his. Heather’s fire is looking solid as Deshawn starts from square one. Her flames lick the rope above, but a few moments later, both fires are burning through rope! Deshawn pulls out the win, and just seconds later, Heather’s rope also snaps. But it’s too little, too late, and Heather becomes the final member of the jury.

THE LAST DAY | The Final 3 celebrates by watching the sun come up, as they all reflect on their journey over a beautiful looking breakfast. While Xander calls himself an underdog, Erika says she’s been underestimated, a “lion that’s dressed like a lamb.” Deshawn, meanwhile, says his social skills got him there, and he’s right about one thing: “There are no goats in this Final 3.” 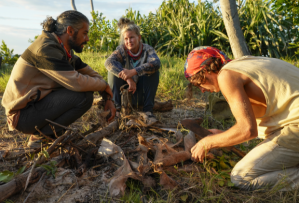 FINAL TRIBAL | Danny wants to know how the Final 3 adapted their plan through the various stages of the game in order to make it to the end. Xander knew he didn’t want to play like past players, so he was a workhorse in the beginning, and marketed himself (and his advantages) once at the merge. Deshawn emphasizes his relationship-building and social capital. But Ricard then counters, saying Deshawn threw everyone under the bus once they merged. Deshawn says his truest intention was to protect Heather and Danny, but he did want Erika gone. Erika details her plan to slowly work her way into the majority’s good graces, but when Luvu kept winning, she had to navigate relationships forming around her, planting seeds that she could hopefully reap the benefits of later.

Xander takes a little heat for his lack of social game, but is able to explain how staying somewhat paranoid helped him stay aware of what was going on. But Ricard then dings him for taking Erika into the finals, and Xander even admits he didn’t think Erika was as big of a threat as she is.

Shan calls out Deshawn for his swinging emotions and “temper tantrums.” She also wants to know why he didn’t move forward with the all-Black alliance. He confirms that voting her out hurt him very deeply, and that if his wild emotions were perceived a certain way, he just has to accept that and apologize for it. But he would never sell out his people or a cause just for a game.

Danny then addresses Erika, saying she did amazing in the challenges and puzzles, and whether intentional or not, she allowed people to underestimate her, which covered what she was really capable of doing. She talks about how people treat her like an intern when she runs boardroom meetings, then mentions she was on the right side of the vote at most of the Tribal Councils. She was never out in front of the pack, but never quite at the bottom either. “I knew if I got [to the finals], I’d be a dark horse,” she says.

AND THE WINNER IS… | The cast is SHOCKED when Jeff tells them he’s announcing the winner at. this. very. moment. So who emerged victorious? The winner of Survivor 41: Erika, who received all but one of the votes. Coming in second is Deshawn.

Did the right person win? Grade the finale (and season) below, then tell us your thoughts in the Comments!