A “truth bomb” may have exploded on Wednesday’s Survivor, but it took out neither its intended target nor the player who lit the fuse.

With Deshawn down on his luck having lost the numbers, he attempted to blow up Erika’s game by outing her plans to eventually cut Heather. But with everyone’s main target Ricard immune, the vote came down to splitting up allies Danny and Deshawn. And while Deshawn was the one who made that Hail Mary play, it was former Dallas Cowboy pro Danny McCray whose torch was snuffed. (Read a full recap.)

Here, TVLine talks to McCray about why he didn’t gun for Xander, his close friendship with Deshawn and what he really thinks about Season 41’s questionable hourglass twist.

TVLINE | Going into the season, if someone had recognized you from the NFL, did you have a plan in place for how you would’ve dealt with that?
I didn’t have a plan. If they recognized me, I was going to have to own it. But I did have a plan for how to keep it secret without lying too much. It worked out pretty well. Nobody knew that entire time! I told them I actually walked on. Anybody that knows sports knows that if you walk on, it’s difficult to make it to the NFL. I had a story for why I ended up coaching, which was that I was coaching to let people know that everybody doesn’t make it to the league, but you are valuable in some other aspect of your life.

TVLINE | After you told Deshawn the truth, were you not worried that he might blow up your spot at Tribal? I thought for a second his truth bomb might’ve been aimed at you…
[Laughs] No, absolutely not. Deshawn and I had a really good relationship. He never went back on his word to me, and I didn’t think he would at that moment. 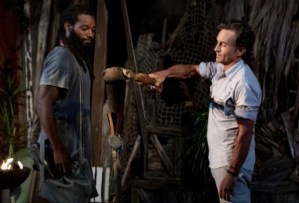 TVLINE | Why did Ricard and Heather think you had a “pep in your step” after you went idol hunting? Were you trying to make them think that on purpose?
Honestly, I was not trying to do it on purpose. I was just trying to show that I was not going to let them defeat me by being sad, because I knew my name was getting written down that night. It was not my intention to make them think I had an idol, but once they thought it, I definitely ran with it.

TVLINE | Why didn’t you and Deshawn place two votes on Xander, then maybe tempt the others to flush him and his idol out?
Survivor is still Survivor, and Deshawn and I had a really close relationship. But at the end of the day, we didn’t want to have the temptation of stabbing each other in the back. So if we were to say, “We’re going to put two votes on Xander,” and one of us votes for Xander and one of us votes for the other one, then that person goes home. We just wanted to give each other that respect, and I think Deshawn wanted to save himself from having the potential opportunity to stab me in the back.

TVLINE | The topic of diversity entered the conversation a lot in these last couple episodes. Did the cast’s diversity surprise you?
It actually did! We didn’t really get to see each other or talk to each other — and we had masks on, so we didn’t see each other’s faces — but the first thing I recognized was how many African American people were on the cast. At that point, I thought Naseer was African American, so I was like, “Man, there’s a lot of us out here! This is crazy. This is actually really great for people to watch on TV.”

TVLINE | Was an all-Black alliance in your mind from the very start?
It wasn’t at the start. It was more me trying to focus on what my game would be. A lot of people think the alliance was formed just based on the fact that we were Black, but none of those alliances would work if you don’t trust the people and understand who they are. You still have to get a tone for what they actually want to do in the game. I think that’s why Deshawn and Shan butted heads so much, but still tried to keep it going. In my mind, when I saw that many African American people out there, it wasn’t my first intention to say, “Hey we’re all going to work together to get forward in this game.” 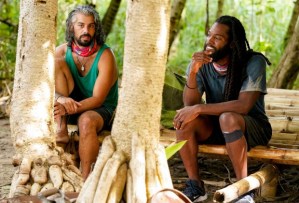 TVLINE | You guys lost the numbers after you voted Shan out. Do you regret cutting her so early, and do you think if you had kept her things would’ve turned out differently?
I don’t think so, and I say that because I [already] thought we had lost Shan as a number, and if we lost Shan, that meant we had also lost Liana. They didn’t show me actually tell Shan before she talked to Liana that we had planned on voting Ricard, and Shan agreed to go along with that. So it surprised me to watch Liana tell her the plan and then Shan decide she didn’t want to go along with it anymore. Once I saw that she went back and told Ricard, I figured we had lost her and Liana, so the best thing for us was to go ahead and cut ties before they were able to get us.

TVLINE | And Ricard just kept on winning those immunities…
We had an opportunity last week to get him out. I won the immunity and thought it was the perfect time, but Xander has watched a lot of Survivor, and he had this thought about shields, and he wouldn’t let him go.

TVLINE | When I spoke to Sydney, she said that you shared some fiery words with Probst about that hourglass twist. What do you remember from that night and that specific conversation at Tribal?
[Laughs] Listen, I’m not a confrontational type, and I love Sydney, but I wouldn’t say I was yelling at Jeff or anything like that. But it was very important for me to let him know that the integrity of the game is at risk when you are the host and you’re able to lie to the contestants. If you go out there and say, “Hey man, this is what’s happening,” kind of like the Do or Die twist, then I can accept that. But when you are the person that says, “Work hard, dig hard, you have to earn everything this season on Survivor,” and then you earn it, really just to not earn it, it didn’t sit well with me. Being a competitor, it was difficult for me to process.

TVLINE | I think a lot of viewers struggled with it, too. It was clearly one of the more fabricated twists in Survivor history.
I stand by saying this was not a “twist.” Everybody wants to compare it to idols and every other thing that happened, and I say, “Listen, Jeff has never looked at anybody in their face and lied to them. Blatantly.” Erika had no choice but to do it, but I feel like it was a really, really forced moment. 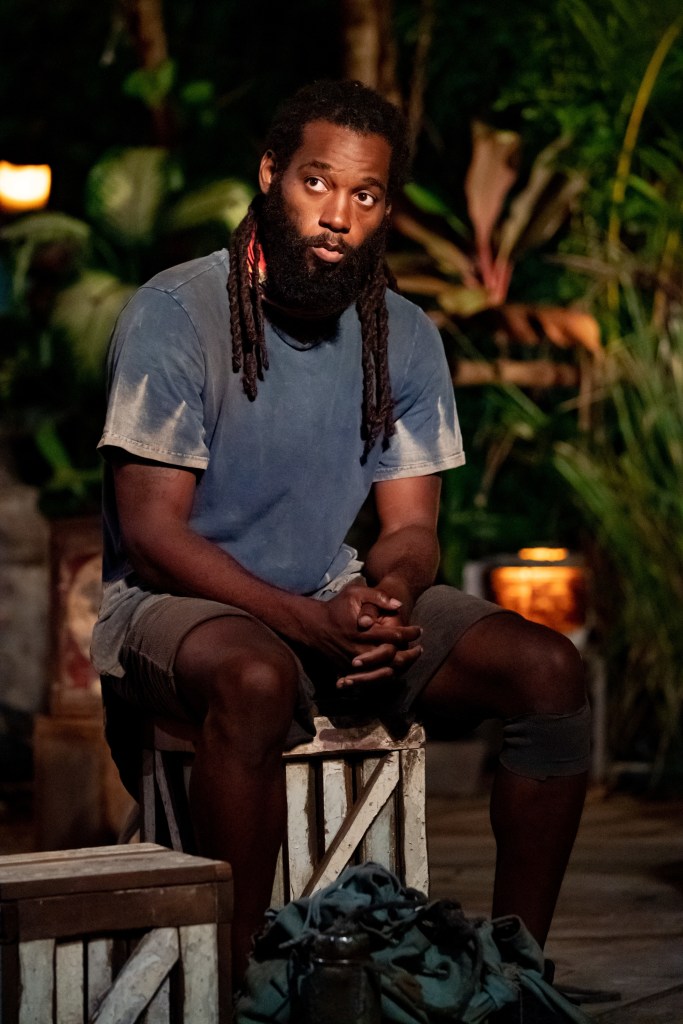 TVLINE | Seriously, who’s going to turn down safety like that, if offered?
[Laughs] “Do you want to change history?” “Uh, yeah!”

TVLINE | Out of the Final 5, who’s the biggest threat to win?
Ricard by far. I had a lot of respect for Ricard’s game and his ability to win immunity challenges. I know he’s going to get a lot of credit for that Shan vote. I am not of the mind of giving him that credit just because it was very opportunistic, and he didn’t have to do much work on that end. But he’s killing those individual immunity challenges, and he talked Shan into doing that Naseer vote, so right now I think he’s the frontrunner.

TVLINE | I never would’ve pegged Ricard as the challenge beast he’s become, but here we are!
Ricard’s done ballet. He’s a dancer, so he has extreme balance. His core strength is really good, and he’s motivated to get out there and win. He has a cause that he’s fighting for, so that’s one of those guys you have to watch out for.

TVLINE | Last question, Danny: Would you ever play again?
Today, I don’t think so. That twist is really… it weighs on me a lot, and I don’t think that I’ll be able to put myself in a situation to be tricked and fooled and bamboozled in that way. I’d rather just stay home, chill out in my Jacuzzi and watch TV.