According to our sister pub Variety, the actor-crooner is set to appear in multiple Season 18 episodes as Todd Eames, a charming and handsome environmental sciences expert who turns up at Grey Sloan Memorial to visit his pregnant sister, who is a patient being treated by Camilla Luddington’s Jo (check out a first look above).

Astin will make his first appearance in the March 24 episode. 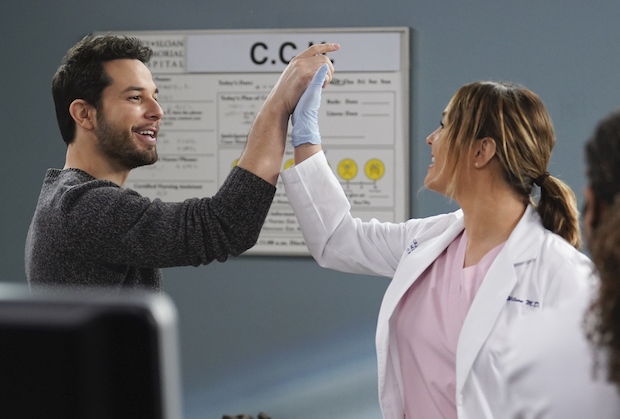 Last month, Grey’s showrunner Krista Vernoff revealed to TVLine that the Season 18 finale will likely double as the ABC medical drama’s 400th episode. “I actually think that the last episode of our season will be 400, if there are no further COVID delays and we don’t end up dropping an episode,” she shared, before teasing that the landmark hour will likely feature “a pretty big event.”

Among the seven dramas ABC has aired this season, Grey’s — which has already been renewed for a 19th season — easily ranks No. 1 in the demo and trails only The Good Doctor in total audience. And among all broadcast-TV programming, it stands as the No. 2-rated entertainment program (tied).