With your broadcast-TV favorites now on holiday break, TVLine is looking at how each network’s shows are stacking up thus far in the 2021-22 TV season. Having previously eyed NBC and CBS, next up is ABC.

Listed below is the average DEMO RATING for each ABC series (including Live+7 DVR playback, since the networks do take that metric into consideration at renewal/cancellation time). Alongside that column you will find the TOTAL AUDIENCE for each program, as well as any noteworthy PERFORMANCE NOTES.

Each program’s RANK (far left) represents what is perhaps the most critical measure — how it is faring in the coveted 18-49 demo compared to other shows on ABC, since come springtime heads must roll to make room for shiny-and-new pilots. (Any ties in the demo were “broken” by total viewership, because I decided so.) 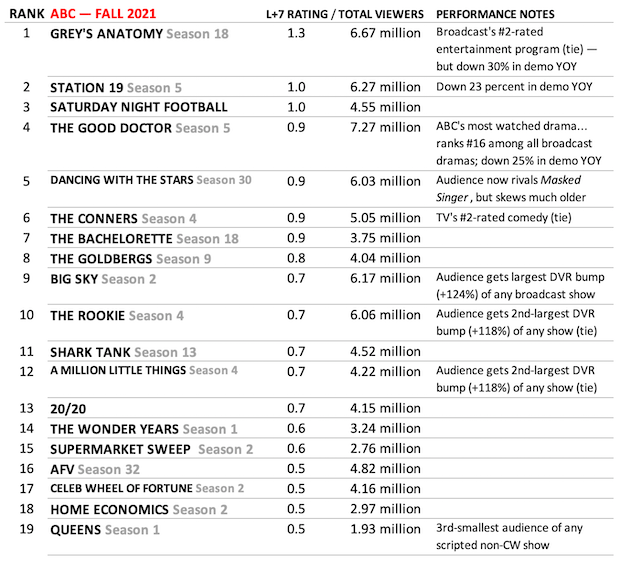 THE TVLINE BOTTOM LINE: ABC desperately needs a big, new hit (or several) — and The Wonders Years and Queens are not them. Its top-rated program is fading (and forever bogged down by “final season” speculation), while the audience for its most watched drama ranks 16th among all networks. (CBS alone has seven better-watched dramas.)

Could the well-reviewed freshman sitcom Abbott Elementary scare up some Ghosts-like buzz, paired on Tuesdays with black-ish‘s farewell run? Will the Latino family drama Promised Land be frothy enough to keep the lights on during The Good Doctor‘s months-long sabbatical? Will the Thursday miniseries Women of the Movement (the story of Emmett Till’s mother) gain any sort of foothold opposite NBC’s Olympics slate? None of these answers are as easy as A-B-C.

Which ABC ranking most surprises or delights you?