Now that your broadcast-TV favorites are on holiday break, TVLine is looking at how each network’s shows are stacking up thus far in the 2021-22 TV season — starting with well-watched CBS.

Listed below is the average DEMO RATING for each CBS series (including Live+7 DVR playback, since the networks do take that metric into consideration at renewal/cancellation time). Alongside that is the TOTAL AUDIENCE for each program, as well as any noteworthy PERFORMANCE NOTES.

Each program’s RANK represents what is perhaps the most critical measure — how it is faring in the coveted 18-49 demo compared to other shows on CBS, since come springtime heads must roll to make room for shiny-and-new pilots. (Any ties in the demo were “broken” by total viewership. #TVLineHouseRules) 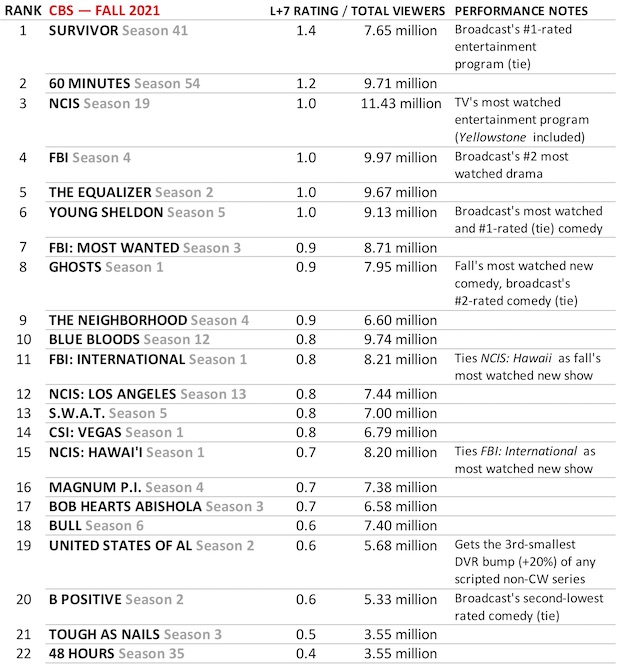 THE TVLINE BOTTOM LINE: Survivor‘s return after a year-and-a-half break proved that absence does make the heart grow fonder, as the reality-TV vet matched Fox’s Masked Singer and 9-1-1 as the fall’s top-rated entertainment program…. CBS is rightly pleased with both the numbers and critical acclaim that Ghosts, a rare single-cam com for the network, scared up…. NCIS, like all of TV (there is no steady or up anymore), took a dip but did not let slip of its title as the tube’s most watched program…. On the drama front, NCIS, NCIS: Hawai’i, CSI: Vegas, Bull and S.W.A.T. all improved their time slots in one way or another, which is all a network can really hope for…. Tough as Nails remains a questionable utility player, frittering away so much of its Survivor lead-in.