Is Resident Alien building to a new mystery? How will New Amsterdam become “upsetting”?! What bromance will Ghosts explore? What’s the scoop on All Rise‘s “killer” comeback? Read on for answers to those questions plus teases from other shows. (Email any brand-new Qs to InsideLine@tvline.com.)

'Missing' Shows, Found! The Latest on Warrior, Westworld and More

Loving Season 2 of Resident Alien! Any scoop on what’s coming up? Like, will we ever find out why the real Harry poisoned Sam?  –Karen
“Yes, all the Sam Hodges questions will be answered in the second half of the season,” showrunner Chris Sheridan tells Inside Line. “We will find out why the real Harry did what he did, and solving the case will free up Sheriff Mike and Deputy Liv to lean into a new mystery by season’s end.”

So glad Ghosts is back this week! Anything new to share? –Belle
The CBS comedy is going to continue to shake up its ghostly pairings with an unlikely dynamic. “I have some fun stuff with Trevor,” Román Zaragoza, who plays Sasappis, tells us. “Sas shows himself as a good friend and helps Trevor heal from something that he went through.” 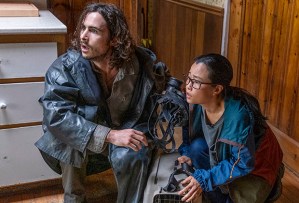 Why was FX on Hulu so quick to cancel Y: The Last Man?? –Dave
Four months after you mailed this question (this is why I never thrown them out, people!), we now have more detailed (and frankly damning) insight. “There aren’t that many shows we’ve canceled in the last 20 years,” FX chairman John Landgraf said at TCA last week, “but one thing they all have in common is they all have a very, very steep decline from the first episode to the final episode of the season, a much steeper decline than the shows we renewed…. I really loved Y: The Last Man, personally…. But I will tell you that its audience decline was really, really, really steep. And ultimately, that’s what made us go that direction.”

Any scoop on Good Sam‘s Lex and Rob Griffith? –Caitlyn
Tonight’s episode is actually a big one for Lex (played by Skye P. Marshall). When last we tuned in, she had made a decision to no longer put Sam’s feelings before her own and seemed headed towards resuming her relationship with Griff (Jason Isaacs). Well, Lex and Sam’s dad are now fully back on, and while she doesn’t want to hide their relationship, the prospect of them attending a fundraising gala together threatens to upend the Griffiths’ tenuous father/daughter truce. Bonus scoop: Professionally, Lex is about to ponder a career-altering decision! 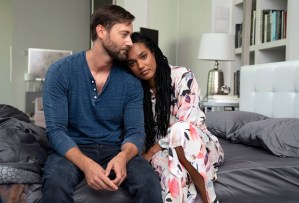 Do you have any scoop about the rest of New Amsterdam‘s season (preferably involving Helen and Max, but will take anything)? –Tom
You’re in luck, because we’ve got some “Sharpwin” scoop from a surprising source. “I think people are a little concerned about Max and Helen, and if Helen’s going to be across the pond…,” Tyler Labine, who plays Iggy, notes. “I can say that there may or may not be some things that keep Helen here [in New York] — and they may or may not be things that are really, really, really going to be upsetting for people. I’m just going to leave it at that.”

Any news on the Practical Magic prequel series that was going to air on HBO Max? –JV
Only that it is still at the pilot stage. 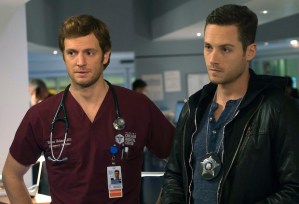 Do you have any 9-1-1 news? Especially about Bobby and Athena? –Lizzie
Rest assured, they are now in a good place in their marriage after dealing with Harry’s kidnapping and Michael’s move. And professionally, they will be working together on several emergencies that involve the LAPD and the 118 — including the previously-teased Speed-inspired rescue attempt in the March 21 spring premiere.

I am patiently waiting for Season 3 of Departure. Do you have any word on when it will return? –IB
Slow your roll, poor Canada (which used to get first dibs) hasn’t even seen Season 2 yet! But no, there aren’t any updates at this time on Season 3 hitting Peacock. 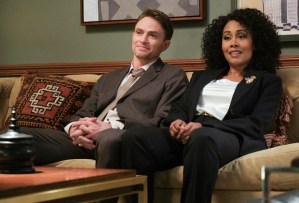 Is there any news on a release date for All Rise? –Marlene
All we have thus far is “June,” but maybe I can tide you over with a summary of scooplets from the CBS-turned-OWN drama’s new season? Season 3 will pick up six months later, where the “behind-the-scenes of our courtroom is going to go through a bit of a shift,” says showrunner Dee Harris Lawrence. “Upon her return, [Emily] is going to be coming with this whole new glow of Puerto Rico [and] the new things that she wants to explore”; Luke “basically become a public defender; Mark has a new role in the DA’s office “that he’s going to be struggling with a bit; Sara is going to become a victim’s advocate who works out of the DA’s office and will be working with Mark; there will be the ushering in of a new judge (played by K Street’s Roger Guenveur Smith); oh, and “we’re going to be dealing with a serial killer,” Lawrence teased.

What is happening with the Jamie Foxx-led game show Beat Shazam? –Darryl
I am hearing the new season should hit Fox (with just one x) by early summer.

Do you want scoop on a favorite show? Email InsideLine@tvline.com! Questions left in Comments will not be read and may very well count against your final score. (With additional reporting by Vlada Gelman)