The first half of Tuesday’s Live in Front of a Studio Audience transported audiences to Eastland Academy in Peekskill, N.Y., where a star-studded ensemble — led by Friends‘ Jennifer Aniston and WandaVision‘s Kathryn Hahn — recreated a classic episode of the 1980s comedy The Facts of Life. 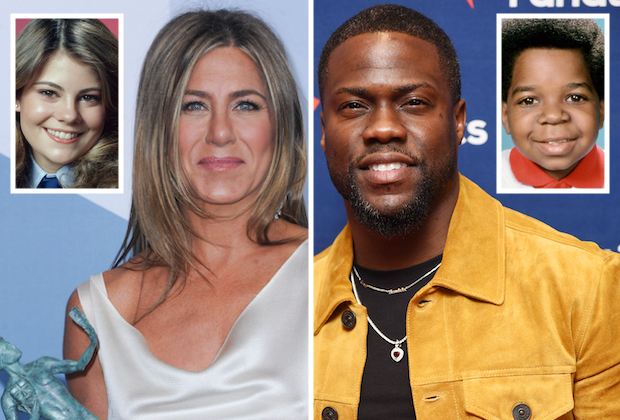 But before the reenactment got underway, original series star Lisa Whelchel (aka Blair Warner) entered in her Eastland uniform to perform the series’ iconic theme song, which culminated in an all-too-brief reunion with former costars Mindy Cohn (Natalie Green) and Kim Fields (Tootie Ramsey). (Nancy McKeon, who originated the role of Jo Polniaczek, did not appear.)

Tuesday’s presentation — a reenactment of the Season 3 episode “Kids Can Be Cruel,” wherein a vengeful Natalie waged war on an insensitive Blair by arranging for brace-faced Carl Price to bid on a date with her superficial friend at an Eastland charity auction — starred Aniston as Blair; Hahn as Jo; Allison Tolman (Fargo) as Natalie; Gabrielle Union (L.A.’s Finest) as Tootie; and Ann Dowd (The Handmaid’s Tale) as Mrs. Garrett. 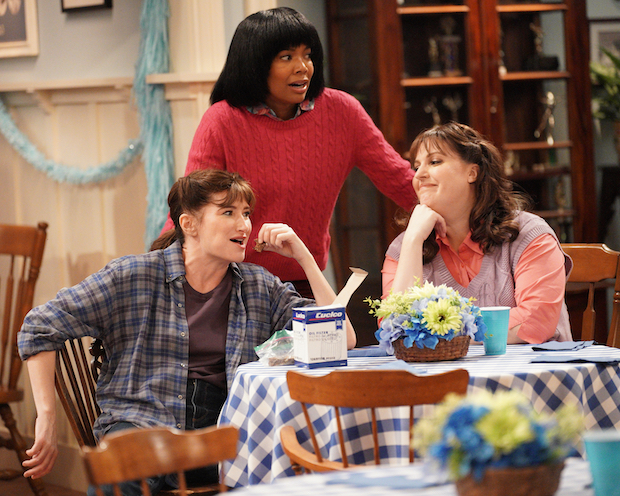 Jon Stewart, whose role was being kept under wraps ahead of air, was revealed as the aforementioned Carl. Surprise guest stars, meanwhile, included former Arrested Development castmates Jason Bateman and Will Arnett as Tim Holifield and Dink Lockwood, respectively.

The original Facts of Life aired for nine seasons on NBC, between 1979 and 1988. A spinoff of Diff’rent Strokes, the series transplanted the Drummonds’ housekeeper, Edna Garrett (originally played by the late Charlotte Rae), to upstate New York, where she served as housemother at Eastland, an all-girls boarding school. (A reenactment of Diff’rent Strokes followed.)

The legendary Norman Lear — whose Embassy Television produced the original runs of Diff’rent Strokes and Facts of Life — once again served as host and executive producer of Live in Front of a Studio Audience, alongside Jimmy Kimmel.

At the end of the Facts of Life reenactment, Whelchel, Cohn and Fields joined Kimmel back on stage, where he asked them what they thought of their successors. “I think Charlotte is toasting Ann Dowd right this very moment,” Cohn said.

The inaugural Live in Front of a Studio Audience special aired in May 2019, and recreated episodes of All in the Family and The Jeffersons. That was followed by a second installment in December 2019, featuring a new reenactment of All in the Family and a classic episode of Good Times. A fourth installment has not yet been announced — but we’ve already got a few ideas.

Grade the Facts of Life portion of ABC’s Live in Front of a Studio Audience below, then drop a comment with your full review.