No need to adjust your TV sets: It’s not the 1970s, despite ABC’s best efforts to make you think so Wednesday night. The network, aided by of Norman Lear (One Day at a Time) and Lear superfan Jimmy Kimmel, recreated two of the TV legend’s classic sitcoms with a star-packed cast in a one-night-only live* performance. (*If you were on the East Coast; other time zones were shown a taped repeat.)

If you’ve never seen All in the Family before, here’s what you need to know: Archie Bunker (played in the live version by Woody Harrelson, Cheers) is an old-school, working class bigot who lives with his dutiful wife Edith (Marisa Tomei, My Cousin Vinny), daughter Gloria (Ellie Kemper, Unbreakable Kimmy Schmidt) and liberal son-in-law Mike, aka “Meathead” (Ike Barinholtz, The Mindy Project). 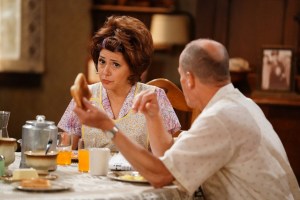 The episode recreated Wednesday, “Henry’s Farewell,” originally aired Oct. 20, 1973. As such, it includes vocabulary — particularly when it comes to Archie’s dialogue — that is sometimes dated and often offensive. As Norman Lear, who produced both All in the Family and its spinoff The Jeffersons, noted at the beginning of the live special, the social themes present in the episodes are still very much in effect in America, and “There is so much more work we must do in this country we love so much.”

And on that note, how about a recap?

Edith, Gloria and Mike are eating breakfast at the table when Archie comes downstairs, already grumpy about Edith waking him up earlier only to tell him it wasn’t time for him to get up yet. He then launches into Mike, aka “Meathead,” for listening to the radio at the table. After some back and forth about how President Nixon acts like a king, Archie patronizingly tells his daughter that being president is a lot different than being a sovereign. “Yeah, you can probably make a lot more money that way,” Mike quips. Edith, bless her heart, sees her entrance and brings up the Bible verse about how it’s easier for a camel to pass through the eye of a needle than for a rich man to get into Heaven. Archie, rolling his eyes, tells her to get him some coffee. (Side note: Anyone else get the feeling that Harrelson was reading off cards during this part?)

They continue the theological discussion with a riff on whether or not God is well off — “God ain’t got no dough,” Archie decrees, but Our Father could be flush with cash if he wanted to — then Edith scurries into the kitchen to check on some cookies she’s baking. Gloria exposits that the treats are for Henry Jefferson’s going-away party, yet another subject about which Archie has Very Strong and Really Racist views.

“The whole street’s going crazy just because one colored guy wants to leave home?” he asks, sniffing that he’s not planning to attend. “That’s ’cause you’re a racist, daddy,” Gloria pipes up. (Side note: I had forgotten that this show often called Archie out on his BS. Glo’s comment is a refreshing surprise.) Archie maintains he’s not racist, he just doesn’t like Henry’s brother/Lionel’s dad, George Jefferson. Trying to soothe the situation, Edith tells her husband that Henry will be disappointed to miss him at the bash: “Just yesterday, he told me if there was one person he’d be happy to say goodbye to, it was you.”

Archie is in the middle of a casual tirade about “coloreds” when Lionel (hi, The Leftovers‘ Jovan Adepo!) shows up; it’s a sign of the times that Archie isn’t even the slightest bit chagrined that Lionel, a black man, has overheard his terrible comments. For his part, Lionel is completely unsurprised about Archie’s take on “anthropology.” 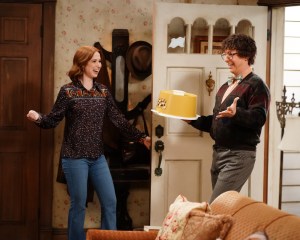 Soon after, Mr. Lorenzo (hi, Will & Grace‘s Sean Hayes!) arrives to drop off a cake he made for the party. He tells a bunch of bad jokes, repeatedly pokes Archie in the arm, and exits. “Ain’t he clever?” Edith asks, then she hands Lionel the serving dishes he’s there to borrow. Upon hearing that Henry is moving to Duchess County to open a dry-cleaning store, Archie remarks that Henry will have a rough time of it, because that county “don’t even let the Heebs in.” Lovely. “Well, when we get there, we’re gonna let a whole bunch of them in,” Lionel replies.

He messes with Archie one more time on his way out, joking that his uncle has been saving up welfare checks even though he’s working. “Don’t you read the papers? That’s how we all get rich,” he says, closing the door behind him.

Later, Louise Jefferson (hi, The Other Two‘s Wanda Sykes!) knocks on the back door, carrying the plates Edith sent over earlier: Her husband, George, refuses to throw an integrated party in his home. So they’re left without a venue for Henry’s going-away fete. And when Edith muses that they need somewhere like her house, Louise interprets that as an offer to hold the event at Casa Bunker.

You can imagine Archie’s reaction to this news. “Don’t you see?” Mike angrily informs him. “The crisis is over… Black people have arrived. They’re here!” There’s a lot more yelling: The upshot is that Edith refuses to back down, so Archie refuses to attend the party, and Meathead calls him a chicken. But when Louise returns with a pie and the announcement that George has no interest setting foot in the Bunkers’ house, Archie asks her to deliver a message for him: George is a chicken, too.

(Let’s pause for a moment to assess how everyone’s doing. Harrelson is… fine? Kemper is a sharper Gloria than Sally Struthers ever was, and I kinda like it. But Tomei is, by far, the most committed to her role. She’s giving me the most consistent entertainment out of the bunch. And do we think they’re using a laugh track to boost the studio audience’s yuks?) 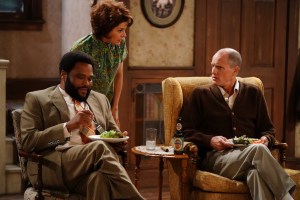 When it’s time for the party — which isn’t much of a bash, given that it’s just the Jeffersons and the Bunkers’ extended fam —  Archie makes small talk with Henry (hi, black-ish‘s Anthony Anderson!) by telling him about an African-American co-worker. “Would you believe it, he makes as much money as me?” Bunker muses. “Then he must be twice as smart as you,” Henry quips. They get into a conversation about privilege, and when Henry asks why there hasn’t been a black president yet, Archie explains that it hasn’t happened “because God ain’t ready for that yet.”

“What about a woman president?” Gloria interrupts, and the men scoff as she says that women are more oppressed than black people. “I don’t see no ghetto for women,” Henry says. “What do you call a kitchen?” she shoots back. Zing!

All in the Family Revival Cast Photos 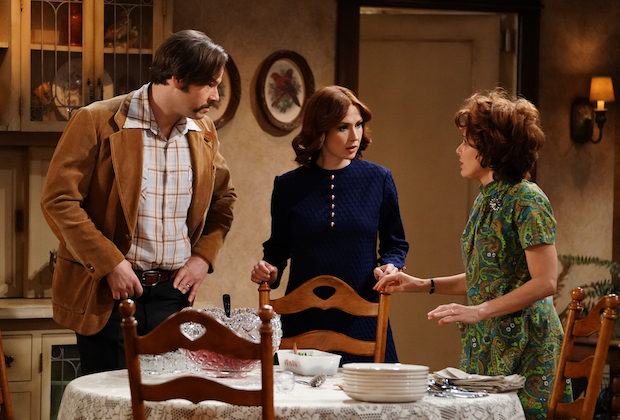 After the food is served, Henry raises a glass to Archie and gives him a backhanded compliment. But before Archie can return the gesture, George (hi, In Living Color alum Jamie Foxx!) starts yelling from outside the door. George and Archie exchange insults before Archie taunts him into finally entering the house. 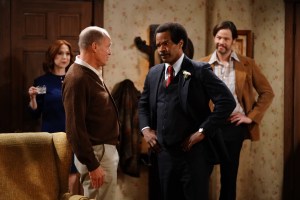 Since he’s there, George gives his sibling a heartfelt speech about how much he’s going to miss him. (Foxx flubbed his lines big time during this part, then broke character to acknowledge the gaffe, which in turn cracked up pretty much everyone else on the set.) Anyway, the feeling is mutual, and they hug. “Black families don’t feel love, huh, Arch?” Mike asks his father-in-law, calling back to an argument Bunker made earlier. Archie’s retort: “How is it that you can remember everything except how to work?” Then George calls the Bunker home a “honky house” and leaves.

Now it’s your turn. Grade the All in the Family portion of the special below, then let us know if you’d like to see more throwback events like this in the future.