In the second half of Wednesday’s Live in Front of a Studio Audience: Norman Lear’s All in the Family and The Jeffersons, the formidable tag team of Jamie Foxx and Wanda Sykes took center stage as George and Louise Jefferson, the movin’-on-upwardly-mobile couple played by Sherman Hemsley and Isabel Sanford in the 1975-85 sitcom. How did they and their co-stars fare in their remake of the series’ premiere? Read on… 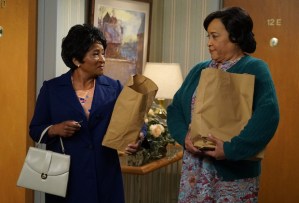 ‘I ALWAYS SAY THERE ARE TWO THINGS THAT ARE NO FUN UNLESS YOU HAVE COMPANY — AND THE OTHER ONE IS DRINKING COFFEE’ | As “A Friend in Need” began, no less than Jennifer freakin’ Hudson (!) sang the theme song! (Needless to say, she slayed.) From there, Louise and pal Diane Stockwell (Jackée Harry, who I almost didn’t recognize de-glammed) arrived back at the Jeffersons’ place after grocery-shopping. While Louise rushed inside to catch the phone, Diane remained in the hall to pick up the groceries that her friend had dropped. Once Mr. Bentley (Stephen Tobolowski) happened upon her, it became clear that Diane thought Louise was, like her, a maid in the building. Diane didn’t even realize that the Jeffersons who lived in the posh digs were Louise and her husband. Once inside, Diane expressed astonishment that Louise’s boss would let her call him George. Boss — ha. Louise would never call George that, she said. Though “sometimes I call him loudmouth.” (And how adorable was Sykes as Weezy?) When George came in, Diane was taken aback again. “I didn’t know the Jeffersons had a couple,” she said. “A couple of what?” asked George. A maid and a butler. When George clarified that he and Louise were the Jeffersons, Diane couldn’t believe it. (Harry even unleashed her inimitable laugh.) “You ain’t tall enough to be no basketball player,” she told George, “and you’re too old for a rock-n-roll singer.” After George explained that he owned some dry-cleaning stores, Diane beat a hasty retreat. She didn’t wanna hang out with Louise anymore. “I thought you was a maid like me,” she said, adding that George was right, it did make a difference. After she’d gone, Louise was understandably upset — Diane was her friend. “No, she’s not,” insisted George. “She’s a domestic.” The two of them, they’d made it, he went on. Regardless of where they were from, now “you from the East Side, she from the West Side,” George said, “and I don’t want no crosstown traffic in my kitchen!” (Special props to Foxx for nailing Hemsley’s physicality. So far, Tobolowski, his British accent coming and going, was the weak link for me.)

After Mr. Bentley interrupted the Jeffersons’ argument to return an apple that had rolled away from Diane — and to ask George to walk on his back — his reluctant chiropractor asked whether in England, people made friends with their maids. Oh yes, Mr. Bentley said. In fact, he’d been very close with his nanny. As soon as he left, George and Louise resumed their argument. He wanted to take her to lunch, but she insisted that she couldn’t, she had to clean the windows, lest his mother complain about the obscured view. That did it — George wanted her to hire a maid once a week. Heck, she could even hire Diane if she wanted. Louise balked at that. She knew firsthand that domestic work was all “Yes, ma’am” and “No, ma’am.” So “how can I ask Diane to say ‘Yes, ma’am’ to me?” What’s the big deal? George asked. “Now you’re the ma’am. Some people gotta be the ma’ams, and the rest are the mammies.” As their fight picked up steam once more — with George going so far as to order his wife to hire a maid (come again?!?) — their son Lionel (Jovan Adepo) entered and made things so much harder for his mom by saying that girlfriend Jenny’s parents, who also lived in the building, had a maid. Finally, Louise said that she’d hire a maid one way and one way only — over her dead body! “Good,” cracked George, “then she can clean up the mess!” 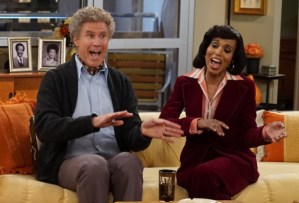 ‘ALL MY LIFE, I’VE ONLY BOUGHT THREE KINDS OF DRESSES — 50 PERCENT OFF, SECONDS AND GOING-OUT-OF-BUSINESS’ | Later, Louise pled her case to Jenny’s parents, the Willises — Tom (Will Ferrell, who made me laugh just the way he delivered his first line) and Helen (Kerry Washington, apparently funnier than I’d ever realized). When Louise remained unmoved by Helen’s suggestion that “having a maid isn’t the worst thing in the world,” Tom said that she only had one option left: She’d have to divorce George on the grounds that he wanted her to have a maid. “Then,” he laughed, “after they release you from Bellevue… ” But it wasn’t funny to Louise. George had called an employment agency and expected her to interview potential maids the following day. Finally, Helen decided that she knew what the problem was: Louise felt guilty about spending money. But she shouldn’t! Sayings like “A penny saved is a penny earned” were invented by rich folks “to keep poor people happy about being poor!” Helen cracked. After the Willises sang a few bars of “I Got the Sun in the Morning,” Helen got Louise alone to let her in on a little secret: She could have a lot of money and still enjoy life. All she had to do was learn three little words: “I’ll take it.” Trouble was, Louise had to forget the four big words: “How much is it?” When George came home, the Willises quickly tired of “basking in the warmth of [his] welcome” and were about to leave when he found out that they’d sided with him. At that, he changed his tune on a dime and invited them to stick around.

Hey, Helen had a great idea: Why didn’t the Jeffersons hire their maid? She only worked for the Willises two days a week. No way! “We don’t want no used maid,” said George. In fact, now that he knew that the Willises had a maid two days a week, he wanted a full-time maid. He’d earned it, he added, since he’d worked his way from the bottom to the top. “So does a gopher,” cracked Helen. When all the yelling drew Lionel out of his bedroom to complain that he and Jenny couldn’t hear the stereo, George insisted that the young lady come out, too. “Pop knows we’re messing around,” Lionel called to his girlfriend. When Jenny (Amber Stevens West) emerged from the bedroom, she did so wearing only a blanket — as a joke. She had her clothes on underneath. She and Lionel then demonstrated how silly his parents sounded when they were bickering. Afterwards, Louise asked George why they couldn’t talk through their problems like the Willises — they never fought. They can’t fight, he replied, because they’re scared if they do, within minutes, Tom would be calling Helen [bleep]. (In the original episode, they actually used the N word.) Once alone, Tom suggested that it didn’t matter if he sometimes thought to call her [bleep] or she thought to call him honkey. “What matters isn’t what crosses our minds, it’s how we live our lives together, and baby, we’ve been doing that pretty good,” Tom told his wife. “Damn good,” she replied as they moved in for a smooch. 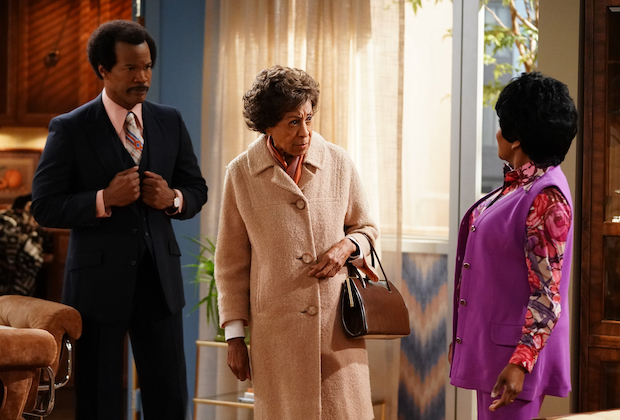 ‘WELL, HOW COME WE OVERCAME, AND NOBODY TOLD ME?’ | The following day, Louise looked for any excuse not to hire the maid who was late… even though it was actually five minutes before their appointment. When the doorbell rang, it wasn’t the applicant, it was George’s mother (Fran Bennett). “I was just passing by,” she said. “On the 12th floor?” Louise responded. At first, Mother Jefferson tried to put down Louise, expressing shock that she wanted a maid to take care of that “itty bitty apartment.” But upon learning that it was George who wanted the maid, she said that well, it would be nice for the place to be kept clean “for a change.” When she headed to the kitchen, Florence (what?!? — the Marla Gibbs, not Justina Machado as we’d been told!) arrived right on schedule. “I always say I ain’t got no right to waste time when other people are paying for it,” she said. Hearing that, George was ready to hire her on the spot. He became even more eager when she said that she wouldn’t clean their windows every two weeks — it would have to be every week! No sooner was she hired than Diane arrived. (227 reunion! This just kept getting better and better!) She couldn’t believe that Louise had hired a maid without offering her the job. Just as Louise explained that she hadn’t wanted to ask her friend to be her maid, Helen showed up — Diane was her maid. “Lucky we wasn’t good friends,” Diane cracked. As the episode drew to a close, Florence suggested that the Jeffersons and Diane work it out; she herself could get another gig from the agency. But she was perplexed by one thing: The Jeffersons lived in a fancy apartment, Helen lived in a fancy apartment… “How come we overcame, and nobody told me?”

So, what did you think of The Jeffersons part of the special? Grade it in the poll below, then hit the comments with your reviews.