Wednesday’s Live in Front of a Studio Audience recreated an explosive Christmas Eve dinner at the Bunkers, as All in the Family‘s Archie unloaded on Meathead’s war-avoiding friend.

Editor’s note: The aforementioned episode, Season 7’s “The Draft Dodger,” originally aired Dec. 25, 1976. As such, it includes vocabulary — particularly when it comes to Archie’s dialogue — that is sometimes dated and/or offensive.

When the episode begins, Archie (played again by Woody Harrelson) is looking forward to hosting his good friend Pinky Peterson (City on a Hill‘s Kevin Bacon). He tells Edith (Marisa Tomei) that he wants his pal to have a lovely, home-cooked meal for the holidays complete with the “family feeling” that he’s been missing since he’s all alone in the world. He even goes out to get Pinky a gag gift: a battery-powered Santa Claus that squirts water when you squeeze its tie. It doesn’t seem to be working until Edith gives it a good tug and accidentally shoots Archie square in the face.

As soon as Archie heads upstairs to change his shirt, the doorbell rings. Edith answers to find Mike’s old friend David Brewster (The Social Network‘s Jesse Eisenberg), who’s been living in Canada to avoid being drafted into the Vietnam War. Mike (Ike Barinholtz) enters soon after, and boy is he surprised to see him. He tells David that he’s taking a big chance coming down to the States: Even David’s parents refuse to see him! Gloria (Ellie Kemper) is next to meet “the friendly fugitive from justice.” Mike warns David that he’s in for a “big treat, conservatively speaking,” when he comes face to face with Archie, but assures him that his father-in-law would never call the feds. To err on the side of caution, though, it’d be best for David to steer clear of any subjects — everything from politics to religion — that might cause friction at dinner. 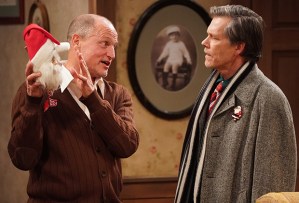 It’s at this point that Archie marches back downstairs and grouses about his newly pressed shirt. “Ch—ks must have invented starch as a torture for the white people,” he says, though the racial slur was censored in ABC’s live version. Archie is introduced to David, their visitor from “north of Niagara Falls.” He assumes that the kid is from Rhode Island, but Edith lets slip that he’s actually from Canada. Then, before the conversation can continue, the Bunkers’ Puerto Rican boarder Teresa (One Day at a Time‘s Justina Machado) enters and sings “Feliz Navidad.” Archie is not a fan, and tells her not to sing in Spanish. “God don’t wanna hear that,” he gripes — after all, the Bible is not in Spanish. “The world was started by Adam and Eve, not Desi and Charo,” he adds.

Just before Pinky arrives, Archie warns everyone that his friend has been a little low ever since he lost his son Steve in the war. Mike and David share a startled look, then Pinky enters and is greeted by everyone. David heads toward the kitchen to help Edith, while Archie introduces Pinky to Teresa (whose thick accent proves to be a barrier). After that, Archie reveals his gag gift to Pinky and winds up getting squirted in the face yet again. He runs upstairs to dry off, then David enters and shakes hands with Pinky. Little do either of them know what’s about to transpire.

At dinner, Pinky begins to share a story about his son. Archie interrupts and offers to tell a “Polack joke,” but his friend isn’t interested. The conversation eventually finds Archie asking David what brought him to Canada. “Freedom,” he answers. “For some of us, America is not free.” Gloria and Pinky try to change the subject, but Archie is onto David and suspects that he’s AWOL. “I’m not a deserter,” David clarifies. “I’m a draft dodger.” An anguished Arch says that David owes an explanation to the U.S. Armed Forces, as well as the Commander in Chief, then David reveals that he wrote the president and he “just couldn’t come up with as many reasons for killing people as I could come up with for not killing them.” He senses that he’s no longer wanted at dinner, then gets up to leave. Meathead leaps up to defend his friend and asks Archie what it’ll take for him to admit that the war was a mistake. That’s when Archie erupts.

“I ain’t talkin’ about that war!” Archie screams. “I don’t wanna talk about that rotten damn war no more! I’m talkin’ about something else! And what he done was wrong! Saying he won’t go! What, do you think that all the people in this country can say whether or not they wanna go to war? You couldn’t get a decent war off the ground that way. All the young people, they don’t want to go to war.”

Live in Front of a Studio Audience Cast 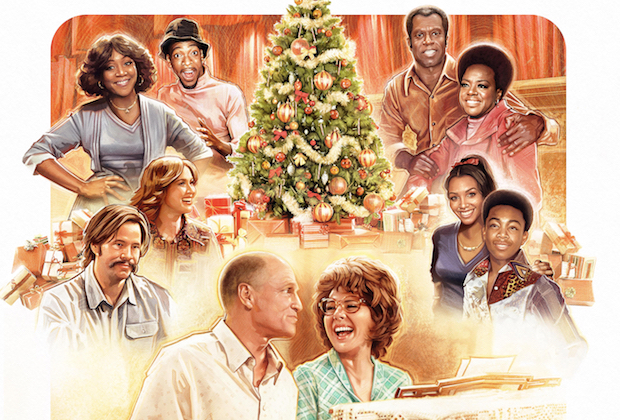 Archie calms down, but he’s still shaken to his core. He tells everyone else to go ahead and enjoy Edith’s dinner, then heads out to the front porch to tell a flock of Christmas carolers to move it along.

Grade the All in the Family portion of Live in Front of a Studio Audience below, then hit the comments with your reactions.