(And no, one is not Benson’s letter — though we’ll know more about that very soon.)

As viewers saw in last week’s season premiere, Stabler is deep undercover as an ex-con known as “Eddie Ashes,” working to infiltrate a major criminal organization. That means limited family time — in the premiere, he had a short but sweet check-in with Eli outside the kid’s school — which will have consequences as the season progresses, Ilene Chaiken teases. 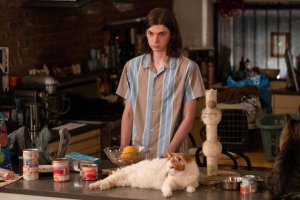 “Stabler is a somewhat absent father sincerely doing his best to be there for all of his kids, but especially his teenage son who just lost his mother. This will present problems and issues that will develop” over the course of the season’s first eight episodes, the EP says. “And without getting too spoilery, Eli will bear the brunt.”

She adds that, around Episode 8 or so, we’ll find out exactly how this new aspect of Elliot’s job has affected his grieving son. But before then, El will have to deal with the return of his mother, Bernie. 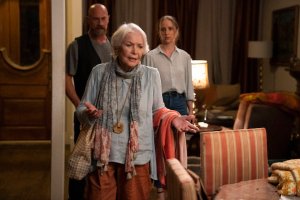 Oscar-winner Ellen Burstyn returns to the part she originated on Law & Order: SVU in the first of this Thursday’s back-to-back episodes (NBC, 9/8c). Burstyn first played Bernadette “Bernie” Stabler in a Season 10 episode of Law & Order: SVU in which her granddaughter, Kathleen, was arrested. During her visit, we learned that Bernie is bipolar and that she once nearly killed Elliot when he was a little boy.

When Bernie makes her OC debut, “She’s having some issues,” Chaiken previews. “Her son is called on to help with those issues, which is like piling on for Stabler. It’s like, how much can he take on?” The EP adds that Grandma Stabler “will also play a role in the aforementioned consequences to Eli — both the good and the bad role, perhaps.”

“It’s thrilling to work with [Burstyn], but it’s more thrilling to see her and Chris work together,” Chaiken says, laughing as she notes that she’s gushing. “And she’s very much a part of our universe in this season.” (Per a rep for the show, Burstyn will return in Episode 5.) 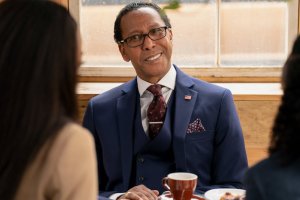 But surely something will go well soon for Stabler, right? Maybe in his professional life? Don’t count on it, the showrunner says. She teases that, although Stabler and Sgt. Bell will continue to have a strong, collegial partnership, “she’s getting involved — not romantically — but in a career relationship with someone who’s going to turn out to be very complicated.”

Remember Congressman Kilbride (played by This Is Us‘ Ron Cephas Jones), who briefly appeared in last week’s premiere? “He takes an interest in Bell’s career, which may or may not be what it appears to be,” Chaiken says. “And that will ultimately create tension with her and Stabler.”