Det. Stabler’s already messy home life is about to get a whole lot more complicated.

Oscar-winner Ellen Burstyn will make her Law & Order: Organized Crime debut in the NBC drama’s upcoming Season 2 — and we’ve got an exclusive first look at the return of Elliot’s mom.

Burstyn first played Bernadette “Bernie” Stabler in a Season 10 episode of Law & Order: SVU in which her granddaughter, Kathleen, was arrested. During her visit, we learned that Bernie is bipolar and that she once nearly killed Elliot when he was a little boy.

When Bernie shows up in the spinoff, Elliot is not expecting her. In the same episode — which airs Thursday, Sept. 30, at 9/8c and which is the first half of a two-part Organized Crime — Stabler’s loyalty is tested at work, and Bell and Jet navigate a newly established task force.

In the photo at the top of this post, neither Elliot nor Kathleen look very happy about Bernie’s reappearance. But then again, in the photo below, Bernie herself doesn’t look all that jazzed. Oh, Stablers. 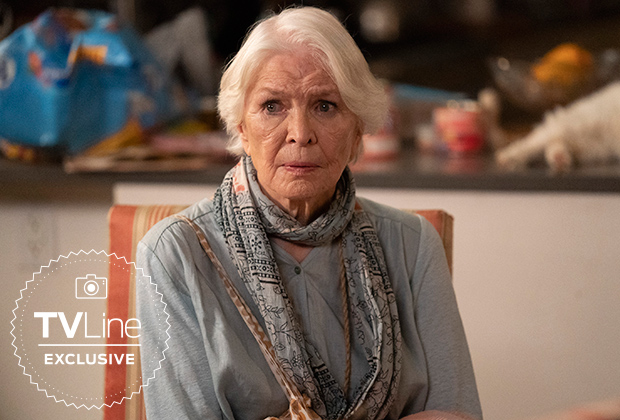 Law & Order: Organized Crime will return for Season 2 on Thursday, Sept. 23, at 10/9c (NBC). Take a good look at the photos above, then hit the comments with your predictions for the Stabler family reunion!