Warning: This post contains spoilers for The Handmaid’s Tale Season 4 finale. Under His eye!

In retrospect, we should’ve known that The Handmaid’s Tale‘s June might take the phrase “smash the patriarchy” literally.

In the Season 4 finale, which began streaming Wednesday, Elisabeth Moss‘ character — incensed after learning that the man who repeatedly raped her was going to go free — organized a group of her fellow former handmaids to chase and then beat Fred Waterford to death in the woods. The women then hung Fred’s corpse from a wall, reminiscent of the way rebels are disposed of in Gilead, and spray-painted the phrase “Nolite te bastardes carborundorum” underneath him. (Read a recap of the episode, then hear what showrunner Bruce Miller and Moss’ co-star Yvonne Strahovski had to say about the hour.)

“The minute he apologizes [at the detention center], he’s not getting away,” Moss tells TVLine with absolute certainty. (Real talk? She’s momentarily channeling June, and it’s a lot badass/a little scary.) Read on as the Emmy winner takes us through the intense episode.

TVLINE | June goes through a lot in this season, and earlier, you mentioned that you feel she reaches her final form by the end of this episode. Talk to me about that.
In [Episodes] 7,8,9 and 10, she’s trying to figure out who she is now, post-Gilead, and where she fits in and where she can help or do the most damage to Gilead. She’s a little adrift and doesn’t really know where her place is. She doesn’t fit in with Luke. She doesn’t feel like she fits in with Moira. She’s really trying to figure that out. She tries these different things, and nothing is working. I think that [Episode] 10 really lands her in a place where she figures out who she is and figures out the kind of warrior she’s going to have to be and the kind of mother she’s going to have to be. She may not be your normal mom. She may not be waking up and making pancakes every morning. But I do think that she winds up in a place where she becomes the woman she’ll be for the rest of her life. She becomes a person who her priority is creating a better future for her children, for her daughters. There may be more than one way to go about that. There’s a way to go about it which is the way that Luke wants and there’s the way to go about it that June ultimately wants. 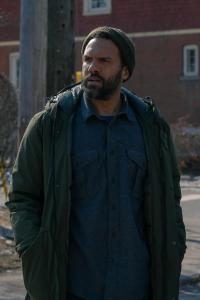 TVLINE | Let’s talk about Luke for a moment. In the car, June tells him she wants to put Fred on the wall, and he doesn’t seem to think she’s serious, but he also seems a little scared. Do you think this is the first time he’s seriously afraid of what she might do?
I think it’s something that’s been building. There have been a few times where he has felt that he didn’t know her and she wasn’t the person that he married, and he’s trying to find his wife, but he can’t find her in this new person. And I don’t think he’s stupid; he understands that. He understands why. He’s not blind in this. That’s why, ultimately in [Episode] 9, he says, “I want you to go see Nick” and lays out this test, in a way, for her. He’s coming around to the fact that he’s not going to get his wife back, so he’s going, “All right, we can at least get our daughter back.” He put Hannah before them, and that kind of breaks June’s heart in a way, but she also knows that’s the reality. She feels very differently about Nick than she does Luke. Nick is the person that understands who she is now, who understands what she went through, has been in the war with her, has fallen in love with the person she is now as Luke fell in love with the person she was before Gilead.

TVLINE | By that final scene in the nursery, do you think Luke thinks that he’s lost her, that they’ve passed a point of no return?
Yeah, I do. I think he has. He recognizes — and what breaks him in that scene — is the fact that she has chosen something else other than staying there with him and Nichole. It remains to be seen what his reaction will be to that and whether or not he will understand that ever. But I think in that moment, yeah, he thinks that she did not choose them. Now, from June’s point of view, she knows the fight that is on their hands, she can only fight in this one way. Clearly, she gave that testimony at the International Criminal Court and it didn’t do anything. Clearly, this group therapy isn’t doing anything. Clearly, Fred’s going to get away with it. And she can’t let that happen.

TVLINE | It has struck me all season how much personal responsibility she takes for those things not working — like when she and Luke reunited and her first words to him were an apology that she hadn’t been able to free Hannah, too. These things are beyond her control!
But then again, there is an argument for, well, someone’s gotta get out there and do it. Someone has to actually bring Gilead down. Someone has to actually make these people pay for what they’ve done to these women, these families and these children. June is just not the kind of person who’s going to stand by and let somebody else do that. Who’s going to do it? Who’s going to win this war, if it’s not the people who are willing to actually get in there and win the war? 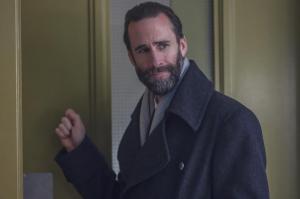 TVLINE | When I spoke to executive producer Bruce Miller, he said it’s not until this episode that June realizes she’s actually going to kill Fred. In your mind, what is the that it became real to June, that she can take out Fred via her own means and with her own army.
When they have that scene together and he apologizes to her, that’s the moment she knows. She doesn’t know how she’s going to do it yet, but that’s the moment that she knows she’s going to have to do something, and she’s going to have to do it herself. Like she says when she gets in the car: “I’m gonna put him on the wall.” She goes to him in that scene because she’s trying to figure out what to do. And she’s trying to figure out who she is. And he tells her in that scene who she is. He clarifies, for her, everything. With his apologies, he signs his death sentence. The idea for her that this man could understand what he did to the point of where he feels guilt about it or feels like he could apologize is so much worse than him being a sociopath or having multiple personalities or having some reason that could in any way explain why he has done what he has done to her. But the fact that he feels remorse makes him human, which means that he knew what he was doing. And so that’s it. That’s the end for him.

TVLINE | It crossed my mind when June lets Fred run in the woods: Is there ever any thought in her head that he might be able to escape her and the other handmaids?
No. He’s not getting away. He’s not getting away! The minute he apologizes, he’s not getting away. That’s it! And I think her laugh when she tears up and then sort of laughs and says “I never thought I’d hear you say that,” what I love about that moment is that there’s so much going on. She’s actually so grateful that he gave her the answer to what she needs to do.