Early on in The Handmaid’s Tale‘s first season, we learned that at least one of the colossally screwed handmaids had somehow slipped the bonds of Gilead’s punishing patriarchy. This week, we learn how she did it.

And blessed freakin’ be, right? After all of the suffering and messed-up ish we’ve witnessed in four short episodes, it was time that somebody* got a win — especially in an hour that finds present-day Offred still locked in her room and slowly losing her mind.

Read on for the highlights of “Nolite Te Bastardes Carborundorum.”

*Somebody without a Y chromosome, that is

YOU’VE GOT A FRIEND IN ME | In an effort to avoid being “a lunatic, lost in her memories” after 13 days in isolation, Offred explores the corners of her room she’s never really noticed. In the closet, near the floorboards, she finds something that seems like Latin scratched into the wall: “Nolite Te Bastardes Carborundorum.” She flashes back to Moira using a sharpened piece out of a toilet tank to scratch “Aunt Lydia sux” into a bathroom stall at the Red Center. When a worried June says that her friend will lose a hand for writing and that it’s not worth it, Moira counters that it is — if only for another woman to see it and know she’s not alone.

Downstairs, the Commander is unhappy: An aunt escaped the night before, crossed the border into Canada and immediately gave an interview to a newspaper. We get a flash of how savvy and smart Serena Joy is when she starts strategizing how the movement should handle the PR disaster — don’t discredit what the aunt says, discredit the aunt herself — but he shuts her down, saying, “We’ve got good men working on it.” Stuffed back into her box, all his wife can respond with is, “Praise be.” I bet Serena was a wicked publicist — one of the scary ones — before everything fell apart.

DOCTOR DRAMA | Offred soon finds herself at the doctor’s office after Rita, the Waterfords’ martha, finds her lying in the closet, and Offred has to spin a tale about passing out in order to hide knowledge of the scratched message. The doctor is, of course, male. And even though all she’s complaining of is lightheadedness and fainting, he gives her a pelvic exam just for the fun of it. Oh, and because The Ceremony is happening that night. He posits that the Commander is sterile, because “most of those guys are,” but he notes that any fertility issues will be seen as a defecit in her — not her owner. “I can help you,” the creepy doc whispers, hand on Offred’s bare thigh, but she declines to have sex with him because “it’s too dangerous.” And then, because this needs to get just an iota more terrible, she thanks him.

Is it any wonder that she absolutely loses it in the car on the way back? Nick watches her sob and beat at the divider separating them, and he looks pained, but he does nothing more than apologize for her situation when they arrive back at the house. Hey Nick, know what that apology and a buck will buy her? NOTHING, BECAUSE WOMEN CAN’T HAVE MONEY. GOD! 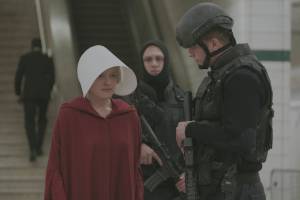 THE GREAT ESCAPE | In a flashback to the Red Center, the women finally learn about The Ceremony, and the slowly dawning realization that they are nothing but walking wombs rolls through the room like a stinkbomb. “Are you saying that we will be having intercourse with the men between the wives’ legs?” Moira asks. Aunt Lydia responds with the biblical story about Bilhah, Rachel’s handmaid who was “given” to Rachel’s husband, Jacob, so they could have children. “That is His word, dear, and we shall abide,” the older woman says, bringing her point home via a sharp kick to Moira’s leg.

That’s the tipping point. June lures Aunt Elizabeth into the bathroom by saying a toilet’s overflowing; when she gets there, Moira uses her toilet shiv to threaten the woman into cooperating. So the pair take her to the basement, make her strip, and then June ties her to a pipe while Moira puts on the aunt outfit.

And then the pair of them just walk out the front door of the center, past all the men with guns, onto a street where even more men with guns guard a horrorscape. Dead bodies are wheeled around like pallets of water at Costco; others hang from a wall. Documents, art, books are burned in a giant fire. Armored vehicles and barricades make the street feel like a warzone. And when Moira and June wonder where they are, it dawns on me that they have no idea what state (or former state) they’re in.

Moira says there are safehouses, and that they should get to the city — she means Boston. But at the Arlington T stop, the women aren’t sure which train goes to Boston. To be fair, I rode the MBTA for five years and often found myself in the same situation. (Whoever decided to make the trains relative to Downtown Crossing, rather than uptown/downtown etc., is an idiot.)

Moira goes to ask a man with a big gun. Another man with a big gun gets very interested in what June is doing. And when the train arrives and the women are separated — with June very clearly starting to get in trouble for what she’s done — June gives her friend an almost imperceptible nod and smile, and Moira sadly steps onto the train, which carries her to freedom. (Or an agonizing death. But maybe freedom?)

Back at the center, June is strapped to a bed while Aunt Elizabeth thrashes the soles of her feet. The next morning, all of the other ‘maids bring a bed-bound June morsels of their breakfast in admiration for her bravery. 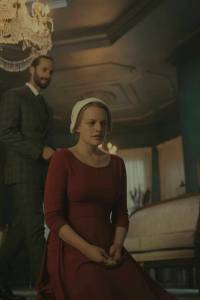 A VICTORY OF SORTS | Oh look, it’s time for The Ceremony! Except the Commander can’t get it up, even when Serena gets down on her knees in private, so everyone gets to skip the horror for once. Back in her room, Offred is on the verge of going full-Janine crazy until she thinks about her predecessor at the house, as well as Moira, and gives herself a pep talk: “Get up. Get your crazy a– up.”

Buoyed by the boldness of those other women, she takes the Commander up on his offer of another Scrabble game in his office. She wins. She then asks him about the Latin phrase in her closet, which gives him pause, but he answers: “It’s something like, ‘Don’t let the bastards grind you down.'” Turns out, the house’s former handmaid killed herself because “she found her life to be unbearable,” he says. Man, this Ernest Hemingway novel of a scene has more going on between the lines than within them. Long story short, she subtly pitches him getting her sprung from solitary confinement, and the next time we see Offred, she’s back outside, breathing fresh air. “Nolite te bastardes carborundorum, bitches,” Offred voiceovers as the episode ends.

Your turn. What did you think of the episode? Hit the comments!

Ready for the next episode? Read The Handmaid’s Tale Season 1, Episode 5 recap here!