Actual title for this week’s episode of The Handmaid’s Tale: “Faithful.” Alternative title for the hour: “How Offred Got Her Groove Back.”

STUDY DATES | As Offred sits on the floor of the Commander’s study, sipping some booze and toying with her Scrabble tiles, her voiceover informs us that they’ve played 34 games total. The unease between the two is pretty much gone. They flirt. They banter. He gifts her with a contraband women’s magazine — “Those were destroyed,” she says, shocked — and flouts the rules by saying she’s allowed to read it when she’s with hi. They’re quite comfortable, even cozy with each other.

So when Serena Joy asks Offred to help her with some gardening, the handmaid naturally assumes that Mrs. Waterford knows about something. The closet etching? The Scrabble games? The magazine? “Any way you slice it, I lose a hand,” she voiceovers. But nope, blondie just wants to suggest that Offred secretly bone someone else in case the Commander is shooting little bearded blanks. “I was thinking of Nick,” she whispers. “He’s already agreed.” Offred looks like she just got punched, but she agrees. What other choice does she have?

LESS-THAN-HAPPY RETURNS | A surprise, later, at the supermarket: Ofglen is back! Only now she’s called Ofsteven, and she’s quiet and sad. “I don’t know anything anymore. After what happened, I’m too dangerous to be a part of it,” she says, at Offred’s urging. Part of what, Offred wonders? “Mayday,” Ofglen Ofsteven responds.

But before Offred can learn anymore, NuOfglen pulls her away. When she gets home, it’s time for her big date with Nick. As Serena leads her charge up to the driver’s apartment, Offred voiceovers that she’s done this a million times, yet “How come this time it feels like I’m cheating on Luke?” 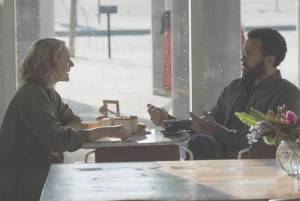 HAPPIER TIMES | A flashback shows us how June and Luke met — when Moira pulled him into a conversation about June’s Tinder photo — and how their relationship progressed. They’d meet for lunch or coffee and were very much into each other, but he was married. Yet after some intensely sexy conversation (Elisabeth Moss and O-T Fagbenie are FIRE in the scenes), they wind up at a hotel to do what people who’ve engaged in months-long foreplay are gonna do.

“I want you to leave your wife,” she says after another tryst. “OK,” he says, surprising her by admitting that he’s in love with her, so what else is he going to do? She responds in kind. Aww. I mean, what a terrible development for Luke’s first wife, right. But aww anyway.

MONSTER IS AS MONSTER DOES | So Nick and Offred have clothes-on, passionless, silent sex while Serena STANDS IN THE ROOM AND KINDA WATCHES THEM. Ugh. Back at the big house, Mrs. Waterford wonders if Offred feels any different, a question so stupid that Offred can’t help but snap at her in response… then cower in fear at the imminent retribution. But rather than getting violent, the Commander’s wife spouts scripture at her handmaid’s pelvic area, then orders her to go lie down.

At The Ceremony later that evening, Offred starts to freak out when Commander Waterford caresses her thigh in full view of Serena. It’s just luck that Mrs. Waterford isn’t paying much attention to the proceedings — and Offred is IRATE when she knocks on Waterford’s study door, uninvited, that evening.

He doesn’t understand why she’s so angry, but offers her another silly magazine in apology. As they talk, she realizes that he’s just as terrible as she always thought: He thinks it’s better for women not to have the choices they used to, because “Now you have respect. You have protection. You can fulfill your biological destinies in peace.” For a kicker, he adds that there’s no such thing as love, and drops the bomb that Ofglen Ofsteven had her “unnatural urges” removed. Oh, is that what we’re calling the clitoris now?

“We only wanted to make the world better,” he says, as Offred looks like she’s going to puke right there on the floor. “Better never means better for everyone. It always means worse for some.”

With his words ringing in her ears, Offred goes and actually vomits in the kitchen sink… where of course Nick sees all. He apologizes for the forced sex later, with the caveat that he couldn’t say no to Serena Joy. Crying, Offred begs for the truth. “Are you an Eye?” she asks. Answer? “Yes.”

EMILY’S LAST STAND | Offred, NuOfglen and Ofsteven are all shopping at an open-air market the next day when Offred gets a moment alone with her friend. She wants to know more about Mayday, but all she really learns is Ofsteven’s real name — which we already know is Emily — before NuOfglen hastily shuts down the exchange.

But though the aunts may have taken Ofsteven’s lady parts, they’ll never take her freedom! So she sees an opportunity and seizes it, deftly hopping into an open car and driving away while the other handmaids look on in awe/amusement. But ish gets real when she backs into some guards, knocking one down, and then she gives Offred a long look, then floors the gas and runs the guard over in spectacularly bloody fashion. It’s only a matter of time, then, before the rest of the armed goons break the window, drag her out and hurl her into the back of a van.

WOMAN ON TOP | Later, after imagining herself plunging a sharp garden tool into Serena’s jugular, Offred realizes that her friend had won — despite everything that had happened to her. “They didn’t get everything. There was something inside her they couldn’t take away. She looked invincible,” Offred voiceovers, using a word Luke once said described her.

Galvanized by that thought, Offred brazenly marches downstairs, knocks on Nick’s door and begins undressing him. Then she takes off her own clothes — except, for some reason, the socks! — and they go at it on his bed, for real this time. It’s everything their prior encounter was not (namely: hot), particularly when Offred rolls them over so she’s on top. That’s right, bitches: June is in the house.

Ready for the next episode? Read The Handmaid’s Tale Season 1, Episode 6 recap here!