Ugh, Serena, of course this is all your fault.

Just when I’d been mustering up sympathy for the Commander’s icy wife, who’s been relegated to smiling housewife despite her keen mind and demonstrated political savvy, it turns out she was one of the architects of her own oppression.

This week’s episode of The Handmaid’s Tale fills us in on Serena Joy’s backstory, and lo, what a Focus on the Family-style horror show it is.

Look, I get that The Handmaid’s Tale is about Gilead’s brutality toward all females, not just the handmaids. After all, Serena and her ilk can’t legally own property/have a bank account/read a book any more than their sisters in red can. And while she’s not subject to the republic’s crueler practices, Serena is by no means a free woman. Because there are no free women.

But to learn that Mrs. Commander was one of the eloquent agents of this terrible change? The notion brings to mind those who enthusiastically voted for a candidate who actively campaigned against their best interests, and then are shocked when their wallet/freedom/way of life takes a hit.

Tell me again how this show’s an overreaction to current events. Go ahead. I’ll wait.

Oh wait, no, I won’t, because we’ve got to get to the hour’s major revelation: Luke is alive?! Read on as we review the highlights of “A Woman’s Place.”

COMPANY’S COMING | A trade delegation from Mexico is in Gilead — quick, handmaids, scrub the hanging wall so it’s a little less bloody for our visitors! (I wish that were an exaggeration of what happens.) While Offred is helping clean up, she wistfully reflects on her tryst with Nick, which netted several, uh, achievements for them both. “Twice for him. Two times for me, almost three. So close,” she muses via voiceover. Oh thank goodness, because if Offred is going to risk her very existence for a roll in the sheets, at least it was a good roll in the sheets. She also acknowledges that the hookup won’t happen again.

At home, Serena reminds Offred not to blink out “H-E-L-P F-O-R T-H-E L-O-V-E O-F G-O-D” in Morse code or anything when the Mexican dignitaries stop by the house that night. Offred agrees, but the subtle sass she throws Serena’s way by waiting just a moment to leave after being dismissed? It’s delicious. Offred and Nick have the briefest of sexy hand touches that evening before dinner — or, as it’s known in Gilead, going to third base — before she’s presented to Mexico’s deputy ambassador… whom Offred is amazed to learn is female.

“Did you choose to be a handmaid?” the woman asks Offred. And what is Offred supposed to do, given that the room is filled with commanders and their wives paying very close attention to what she’s about to say? “Yes,” she answers, and when the diplomat presses her, she adds that she has “found happiness” in her sacrifice.

“My handmaids are having children for the entire nation,” the Commander crows proudly, and that phrase alone makes my ovaries want to take a nap. We learn a few other things in passing — Gilead’s food is all organic now, there are “new” weather patterns — before the deputy ambassador addresses “the quiet side of the room”: the wives.

All of the teal-clad wives look surprised: No one’s asked them for their opinion on anything other than menus and swatches in quite some time, I’d wager. And when Serena starts spouting off about the satisfaction that comes from being a good little soldier, the ambassador smooth responds with, “Never mistake a woman’s meekness for weakness.” Turns out, it’s from Serena’s book (!), which made the case for “domestic feminism” in the years leading up to Gilead’s creation.

And when the diplomat wonders if Serena could have envisioned the current state of the world, Serena smugly replies, “A society that has reduced its carbon emissions by 78 percent in three years?” But the ambassador’s got her number: “A society in which women can no longer read your book, or anything else,” she shoots back. Damn. 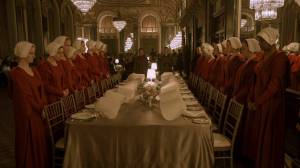 GRIM REALIZATION | But for all her tough talk, the Mexican diplomat is no match for Serena’s “optics:” At a fancy dinner “honoring” the handmaids’ contributions to society, Mrs. Waterford trots out all of the children born via the handmaid system. They frolic around the ballroom and the ambassador is delighted… while the children’s biological mothers look on in grief, anger and a variety of other unhappy emotions. “Looks like Waterford’s going to get his trade deal,” another ‘maid quips to Offred, casually gutting the former June by asserting that they will be the commodity traded.

At home that night, the Commander seems to remember that his wife is a stone fox with a sharp mind, and they have sex for what seems like the first time in ages. Meanwhile, a distraught Offred runs to Nick’s room and berates herself for lying to the Mexican delegation. She eventually allows him to comfort her a little, even going as far as to tell him her real name.

THE WIFE’S TALE | OK, so, Serena’s story: She was not a publicist, like I thought, but she was a semi-successful writer who was slightly more enthusiastic about the Gilead movement than her husband was, at least at first. In fact, via flashback we see her planting the idea about “fertility as a national resource, reproduction as a moral imperative” and saying she wants her second book to focus on that. But Fred is a little distracted as she’s relaying the news, because he’s just gotten a text. “It’s happening. They’ve issued the orders,” he relays, a little cowed: There’ll be three attacks — Congress, the White House and the Supreme Court, in that order — and WHY UNDER HIS EYE ARE THEY DISCUSSING THIS IN A CROWDED THEATER?

Later on, after Gilead is well on its way to being the horrific, civil rights-erasing entity that it will become, Serena is getting ready to give a talk to some of her husband’s colleagues when Fred gently shuts her down. “They won’t let you speak,” he says apologetically, and he truly seems more upset by the unfairness than she is. When he says as much to one of his peers after Serena leaves, the man responds, “Well, this is our fault. We gave them more than they could handle. They put so much focus on academic pursuits and professional ambition, we let them forget their real purpose. We won’t let that happen again.”

Congrats, nameless guy in suit. You’re my new most hated character on this show.

After the Waterfords move into their new house, Serena’s books — including the ones she wrote — as well as her heels and power suits are put out on the curb with the rest of the trash. The worst part? How willing she is to throw away everything that those items represent.

BAD NEWS/GOOD NEWS | Back to Offred, who is summoned at one point to the Commander’s study. Nick is sent to fetch her from her room, meaning they have one steamily illicit kiss-n-grind session in the hallway before she goes downstairs. Waterford is grumpy and gets angrier when Offred seems bored to be in his presence. “Being in here is a privilege,” he says, and smart woman that she is, Offred makes a big show of apologizing and asking if she can stay. He relents, then orders her to kiss him “like you mean it,” then dismisses her again. Back in her bathroom, she brushes her teeth until her gums bleed, then scrubs them all over again.

And when the ambassador swings by the Waterford house to say goodbye, she, her assistant and Offred are left alone for a moment — and the handmaid doesn’t waste her second chance. She lays it all out, the whole ugly truth: beatings, rapings, slavery, etc. And once the diplomat has heard everything… she still won’t do anything.

Her home city is the size of Boston, she explains, and they haven’t had a live birth in six years. They need fertile, healthy women — however they can get them — and the despair in Offred’s eyes as the woman apologetically walks away is crushing. BUT WAIT. The assistant whispers that he can help Offred… and he can start by getting a message to her husband.

When Offred tiredly replies that her husband is dead, the assistant quickly rattles off Luke’s full name and date and place of birth, implying that he has knowledge of their prior life. And he presses Offred to write a note to Luke that he can pass, offering her a pad and pen. Is this the cosmos’ greatest gift? A cleverly disguised trap? We don’t know, because as a conflicted Offred weighs her options, we cut to black.

Ready for the next episode? Read The Handmaid’s Tale Season 1, Episode 7 recap here!