The Handmaid’s Tale this week gives us a brief respite from the unrelenting horror of Offred’s existence… by clueing us in to the ongoing terror of her husband’s life since their family was forcibly split in the series premiere. Hey, at least the scenery is different!

Turns out, the Mexican diplomat’s assistant wasn’t lying: Luke is, indeed, still alive, well and living in Canada. And now we know how he got there — as well as what Offred wrote on the paper she was handed at the end of the previous episode.

Read on for the highlights of “The Other Side.” 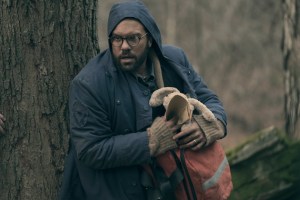 POOR TIRE TREAD FTW! | The hour begins with Luke, June and Hannah in the car, wiping out on the icy road to Canada like they did in the series premiere. After June and Hannah take off, Luke unsuccessfully tries to fend off some Guardians who come after them, guns blazing. They shoot him in the abdomen and strap him into an ambulance… which is ironic, given what happens next.

The ambulance falls prey to the same slippery pavement that Luke’s car did; it skids off a turn, flipping several times before crash-landing in the shallow river below. The driver and medic are killed, but because Luke was immobilized, he survives. I mean, he’s still bleeding copiously and nearing death, but this show fills me with dread (in the good way!) AND WE HAVE TO TAKE OUR WINS WHERE WE CAN.

He grabs some medicine, a bag and one of the Guardians’ coats, then continues on. He winds up in the woods, where he knows he’s come across the scene of Hannah and June’s capture when he sees his daughter’s toy bunny and ripped pages from her baby book, which was apparently in June’s bag. (Sniff!) He eventually stumbles into a town that would look like it belonged in a cute little northeastern snow globe… if it weren’t for the “Gender Traitor” and “Fags Die” graffiti spray-painted on the walls… or the abandoned cars and looted shops.

Luke stumbles into one of the latter, eats what food he can find and passes out on the ground. 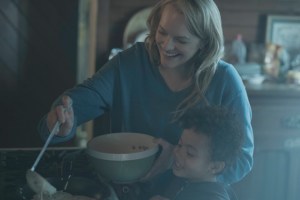 TENSE TIMES | While Luke is out cold — and at various other points during the episode — we get more details about the family’s attempted escape. When they finally decided they needed to get out of Gilead, Luke and June drugged Hannah with Benadryl and met with a fixer, who told them to throw away their phones and the few possessions they’d brought (though Luke saved the photo album and baby book), then had them climb in the trunk while he drove them to relative safety.

Their helper’s name was Mr. Whitford, and he apparently knew June’s mother, who “gave me the snip” — a vasectomy — after it became illegal to do so. We learn a lot more about life during Gilead’s rise, just from the offhand comments made as the escape unfolds. Moira left earlier and set out for Canada on foot, an option not easily available to Luke and June because of Hannah. Their exit was delayed by the time it took to procure visas to enter Canada, which Whitford reveals was folly: American passports (and the visas that go along with them) didn’t mean anything by that point, he told the stunned couple, dropping them at a secluded cabin far north. Whitford gave Luke a gun, just in case, then said he’d be back with papers for them to enter Canada ASAP.

Then one day, while the family was out skipping rocks on the frozen lake, they were interrupted by a hunter whose appearance scared them into running again. As they prepared to mobilize, the hunter showed up at their door and promised that he was friendly… but wanted them to know that Whitford had been caught and hanged. The hunter said he had a contact who’d help them over the border, provided they could get there. And, well, you know the rest. (Side note: Odds that the hunter was really part of the resistance like he seemed? 50-50? 60-40? His genial manner didn’t convince me.)

SHIPPIN’ UP TO CANADA | Luke comes to as a woman kicks him and threatens to shoot him: She’s seen his jacket and assumes he’s a Guardian. When that’s cleared up, she and some friends help him out to their bus so she can treat his wound.

The woman’s name is Zoe, and she was in the military. Her gang is made up of a nun named Christine, a driver named Lila, a gay man named peter and a traumatized blonde wearing a red ear cuff who hasn’t said a word since Zoe found her while raiding one of Gilead’s re-education centers.

“We’re going to the coast” and traveling to Canada that way, Peter informs Luke, who protests that he’s got to get back to Boston to find his wife and daughter. So Zoe marches him into a church near the rendezvous point and shocks him with the number of people who are strung from the rafters: All of them considered traitors — and punished accordingly — for trying to hide fertile women from Gilead’s round-up. “If you go back, you’re gonna die. You’re gonna die and leave them all on their own. Is that what you want?” she asks, pointing out that the American government has people in Canada who can help.

Luke quickly changes his mind, trading the drugs from the ambulance and his wedding band to buy passage on the ship. But just as he boards, Guardians fire on the boat. He and the earcuffed blonde make it on; Zoe gets shot and, presumably, dies on shore as the vessel speeds away.

SEALED WITH A “GET ME THE HECK OUTTA HERE!” | Cut to three years later, where we see Luke and the still-mute blonde in the “Little America” section of Toronto. It’s unclear what their relationship is. Friends? Something more? He refers to them living in the same place, but that might not mean anything.

Anyway, Luke gets a phone call that summons him to what seems like the American embassy or consulate or something. (Side note: As someone who was living in Manhattan on Sept. 11, 2001, the imagery of those missing people fliers covering the walls hits hard.) When he’s called in to meet with a woman from the embassy, she hands him an envelope with June’s note in it. He learns it was written three weeks ago. “So she’s alive?” he asks, eyes filling with tears as the woman confirms that it certainly seems that way.

Luke asks for a moment, then steps to the window where he smiles and cries in what must be a mixture of relief and disbelief. For the first time all episode, we cut to June in her Offred outfit, sitting in her room, as a voiceover reads her hasty missive to her husband: “I love you so much. Save Hannah.”

Ready for the next episode? Read The Handmaid’s Tale Season 1, Episode 8 recap here!