As we continue to delve deeper into the highly disturbing dystopia of The Handmaid’s Tale, this week’s episode offers a comforting reminder that some truths cannot be changed, no matter how radical the regime.

Black markets always find a way around rigid trade structures. American women may never truly be free from the tyranny of sequins and high heels. And the most buttoned-down among us are usually the freakiest when the lights go out.

Read on to see what — and whom! — Offred runs into when the Commander takes her out for a night on the town in “Jezebels.”

BABY, YOU CAN DRIVE MY GUARDIAN | Offred and Nick have a steady thing going now, which she laments via voiceover as we see her perched on the end of his bed, blanket wrapped around her. “I wish this story were different. I wish it showed me in a better light. In a different story, maybe I wouldn’t be such a f–king weakling,” she says. She makes it clear that she’s still sleeping with the Waterfords’ driver despite knowing that Luke is alive, adding that her husband is receding from her memory. Also: “I’m here because it feels good, and because I don’t want to be alone.”

When Nick wakes up, they kiss briefly but then she dresses and leaves, leaving us behind with the chauffeur and his thoughts… which quickly turn into a flashback. We learn that he was an unemployed steelworker who bounced from part-time job to part-time job until all of his prospects dried up; after some frustrated fisticuffs at an unemployment office, the caseworker he punched saw something special in him and recruited him for the Sons of Jacob, a group “that wants to set things right, clean up this country. They have chapters in 30 states. I head up one of them,” the older man tells him. He invites him to a meeting, dangles the prospect of a job. “You’re not alone,” the man, whose name we’ll later learn is Price, promises. Sad Younger Nick looks warily interested.

As the flashbacks continue throughout the episode, we learn that Nick was present for the car ride in which the whole handmaid terribleness AKA “The Ceremony” was conceived (I HAVE TO PUN BECAUSE IT’S SO AWFUL TO CONSIDER CAN’T BREATHE WHERE IS MY INHALER?). Fun fact: Commander Waterford was the one to point out that they needed the wives to buy in on what essentially is a government-run system of concubines, and Price — the man who recruited Nick — came up with the idea that the genteel ladies should be in the room for the ritual rape holy endeavor.

When Waterford and Nick are alone, the commander asks what the younger man thinks of the handmaids. He says it’s better for everyone, “better not to form attachments.” It soon becomes clear this is the first time the two men have met. 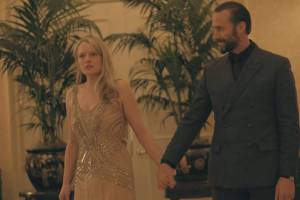 WHILE THE CAT’S AWAY… | Let’s leave Nick there for a moment while we deal with Offred, who is currently about to pee herself in fear after finding the commander sitting on her bed when she returns from her stick-shift lesson with Nick. But Waterford doesn’t think anything’s amiss, probably because he’s too excited about Serena being gone overnight. “Tonight, I’m taking you out,” he coos, then promptly shaves Offred’s legs, provides her with makeup and dresses her up in a short beaded gown and spike heels. It is not serial killer-y AT ALL.

“You look stunning,” he says when she’s all done up. “Tonight, I’m taking you out.” So she dons a grayish-blue hooded cloak, and Nick drives them into what used to be Boston, where no women are allowed…

… no women, that is, except for the prostitutes known as “jezebels,” who populate the underground club/brothel that Waterford thinks is just the cat’s pajamas. “I thought these kind of places were forbidden,” she says, looking around the hotel lobby as women in various states of undress canoodle with men in suits. “Officially,” he says, smiling. I think the hardest part about all of this — and nothing is really easy here — is how damn proud of himself Waterford feels about bringing her here. “We’ve got quite a collection,” he boasts, talking about the women as though they’re blow-up dolls (which they basically are).

BEATS THE ALTERNATIVE | Before I can reach through my screen and shove Waterford’s scotch right up his patriarchy, Offred looks across the room and sees Moira (!) chatting up some dude. They lock eyes; when Moira heads for the ladies’ room, Offred makes an excuse and sneaks away to see her.

“I’m so sorry I left you at the train,” Moira says, crying as Offred pulls her into a hug. They don’t have much time — apparently, an aunt polices the bathroom to make sure the women aren’t shirking their duties — so Moira tells her friend to find her on the dormitory level later that night.

After Nick trades one of the brothel’s marthas some drugs and pregnancy tests for booze and such, he watches sullenly as Waterford and Offred head up to their room. 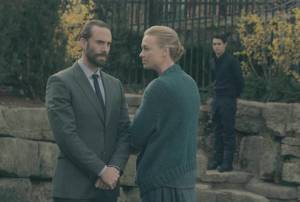 MOIRA UPDATE | The driver instantly remembers the day that Rita, the Waterford’s martha, found a previous Offred hanging from the light fixture in her room. As the woman’s body was carted away, Serena had one thing to say to her husband: “What did you think was going to happen?” Interesting. Could it be that she knows about the commander’s interests in their current handmaid, as well?

Back at the brothel, Waterford drinks and complains that he feels like he has a target on his back. Offred makes the right sympathetic noises, and he’s impressed. “You do understand me, don’t you?” he wonders, which is hilarious in the saddest way possible: She literally pays him the bare minimum of attention, yet he thinks they’re simpatico. She cries. He doesn’t notice as he undresses her.

She tiptoes out while he’s asleep, passes a few tableaux right outta Eyes Wide Shut and finds Moira down in the jezebels’ quarters. Since we last saw the escapee, she made it to Boston, hooked up with some Quakers who had ties to the Femaleroad (ha!) that helped smuggle handmaids out of the country. She didn’t make it farther than an office park outside the city. “They shot the guys who helped me,” Moira sadly tells Offred, adding that because she was a “corrupting influence,” she was interrogated and then given a choice: the colonies or the jezebels.

Moira’s rebellious spirit seems to have been quashed. “Forget about escaping. This is Gilead. No one gets out,” she says, though she’s buoyed a little by news of Luke’s survival. They hug again, cry some more, and then Offred has to creep back upstairs. 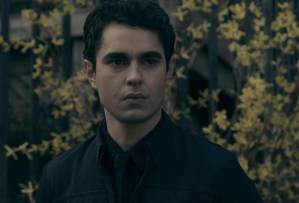 NO MAN’S WOMAN | Another Nick flashback shows us Nick informing on Commander Guthrie — the third man from the limo earlier — who’s been sleeping with his handmaids and skimming from the transportation budget. Commander Price thanks the driver, highlighting how important plainclothes/undercover Guardians are to Gilead.

In the present, Nick drives Waterford and Offred home. But back at the house, the younger man tells Offred that they can’t sleep together anymore, which simultaneously upsets and enrages her. “Is this it? Is this enough for you, this bulls–t life?” she whisper-shouts at him in the kitchen, adding that he knows everything about her but she knows nothing about him. He counters by saying that their affair could get her hanged on the wall. “But at least someone will remember me in this place,” she says, crying more now. “At least someone will care when I’m gone. That’s something.”

Her speech moves Nick, because he pulls her close and says, “My name is Nick Blaine, and I’m from Michigan.” But it’s too little, too late for the ‘maid. “Well under his eye, Guardian Blaine,” she says coldly. On her way upstairs, a newly returned Serena gives Offred a jewelry box she had as a child. And upstairs, while the little ballerina twirls to the off-key music box rendition of the overture from Swan Lake, Offred uses the box’s key to scratch a new message in the closet wall.

“You are not alone,” she etches near “Nolite te bastardes carborundorum,” voiceovering that even if she is alone right now, “there’s always someone” who’ll hear her story… eventually.

Your turn. What did you think of the episode? Hit the comments!

Ready for the next episode? Read The Handmaid’s Tale Season 1, Episode 9 recap here!