Everybody needs a cheerleader every now and then. And in The Handmaid’s Tale this week, Moira’s sports a white bonnet and really ugly boots instead of pom-poms and a varsity sweater.

Offred returns to Jezebel’s in the Hulu drama’s latest installment, and she’s hurt to find her formerly rebellious friend’s spirit broken beyond recognition. Meanwhile, one of Offred’s fellow handmaids gets screwed in a different, even more heartbreaking way — if that’s even possible — and is thwarted as she tries to escape the system once and for all.

Read on for the highlights of “The Bridge.”

MOVING DAY | On the day of little Angela’s baptism, the handmaids line up outside the home where Ofwarren (aka Janine) is about to hand over her daughter to her commander and his wife. That ceremony goes about as well as it can, given that Ofwarren has no desire to give up her kid. But she eventually does, and Aunt Lydia walks the addled mama through the column of ‘maids to a van that’s waiting to take her to her next post. “Don’t be sad,” Ofwarren says as she stops to hug Offred. “He’s coming for me.” Oh honey. Ofwarren climbs into the vehicle, and Offred shocks everyone by speaking up to ask Aunt Lydia if her friend is OK.

“She’s tougher than you think,” the matron replies, a little put out. “Let her be an example to you, to all of you.”

Offred’s all, “I’ll show you toughness” and makes a beeline to Alma, the other handmaid involved in the resistance. But when Offred asks about Mayday, she acts like she has no idea what the heck that is. 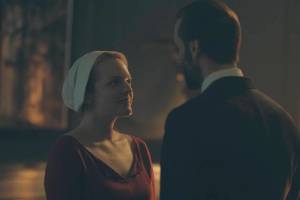 BACK TO THE BROTHEL | Later, at the market, Alma pulls Offred aside. She feigned ignorance because there were too many people around earlier, she says, but she’s got a mission for Offred: Get Commander Waterford to take you back to Jezebels, where you’ll retrieve a package from the bar and wait for further instruction. Offred’s look telegraphs “Well, that escalated quickly,” but she reluctantly agrees to see what she can do.

That night, she coyly waits outside Fred’s study, saying that she “just can’t stop thinking about when we went out. Our adventure.” He’s curt at first, but I’ll give Offred this: She knows how to play him. So when she suggests that they return to the underground brothel, she’s all batted eyelashes and swaying hips… until she reaches the hallway and nearly passes out in relief that Part A of her rather ballsy plan is working.

Nick and his Judgy Eyebrows disapprove, as is demonstrated by the looks he gives Offred while he’s driving them to the club. But Offred’s got bigger problems, because the Commander wants to skip the bar and head straight to their room. So they do, but after they have sex, she pushes a little too hard to go downstairs for a drink. He reveals that he knows why she wanted to come back, and you can see Offred’s internal “Oh s–t” play out on her face before he continues, “to meet someone. I made the arrangements.”

He goes to the door and Moira, aka “Ruby,” walks in looking like she’d rather be anywhere else. “I know you know Ruby. I know her, too,” he says, draping his gross arm around Offred’s friend and for a horrifying moment I think he’s going to suggest that they all get to know each other, but then he leaves to shower.

ALL’S CRAPPY THAT ENDS CRAPPY | Moira’s not happy that Offred is back and refuses to help her get the package from the bar. “In case you hadn’t noticed, I’m a prisoner and a whore,” she says, defeated as she advises her pal to “go home and do what they say.” This angers Offred, who calls Moira a “coward” for giving up and calls her out for reneging on her vow to help find Hannah. “You promised. You f–king pinky swore,” Offred shout-whispers while Fred loofahs in the other room. “Or don’t you remember?”

Then she gives Moira a version of the man-up speech Moira gave Janine at the Red Center, but it doesn’t seem to do much good. “I was doing all right until I saw you again,” Moira says sadly, then leaves. When the Commander finishes scrubbing his bits, he’s disgusted to see Offred sobbing. “Pull yourself together,” he sneers. “We’re going.”

OOPS | Back at the house, Serena’s rooting around in the kitchen disturbs Rita, who accidentally lets slip that Commander Waterford isn’t at home. (Serena thought he was in his study.) The two women share a drink and a few personal details — Rita had a 19-year-old son who died in the war, and though Serena seems to assume that he fought on the side of Gilead, I’m not so sure.

When Fred comes home, he creeps upstairs like the guilty sleaze he is, and is shocked to see his wife waiting for him at the top. They bid each other a sterile goodnight, and if she suspects any sketchiness — and, c’mon, she’s gotta, right? — she doesn’t verbalize it. 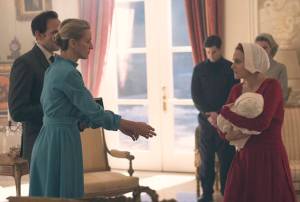 A BRIDGE TOO FAR | In her own bed, Offred dreams of playing on the beach with Luke and Hannah. But then Serena ruins even that by shaking the handmaid awake and demanding that she put on her clothes.

Turns out, Janine didn’t take well to becoming Ofdaniel, and her first Ceremony night with the new couple ended with her screaming for the commander to get off of her. She then ran back to her old house and grabbed her baby. When Offred arrives at the scene, Janine is holding the baby, poised to jump off a bridge. There are Guardians, as well as Commander and Mrs. Putnam (aka little Angela’s “parents”) and Aunt Lydia, standing by and trying to get the woman to come down from her high perch.

It’s unclear whether Janine asked for Offred or the assorted watchers had no other avenue re: hostage negotiator, but Offred tentatively approaches her fellow handmaid, then asks for everyone else to step back and give them space.

“She’s not well,” Commander Putnam tells the assembly, and God love Janine, she shoots back that she was “well enough” to engage in the various sexual endeavors his wife deemed too freaky. She fully outs him as an adulterer who promised to take her and the baby away to start a family. Then Offred tries to soothe Janine with talk of how things are going to go back to normal, how they’ll go drinking with Moira and Alma. “Can we do karaoke?” Janine asks, and for some reason, that pathetic little request gets me more than anything else in this scene.

NO SUCH LUCK | Offred is aware of how this is likely to end, and it’s interesting that she’s not so much trying to dissuade Janine from killing herself as she is from Janine keeping the baby with her when she takes the plunge. So Janine tells Charlotte (her name for her daughter) that she loves her, kisses June on the forehead as she hands over the infant, then says a comically casual, “Bye” as she falls forward into the icy water below.

But Gilead is nothing if not efficient, and Janine’s body is fished out of the river before she can die. The next time we see her, she’s comatose and hooked up to machines in a hospital, because why waste a womb just because the mother has no higher brain function? “May the Lord keep you in His mercy, you stupid girl,” Aunt Lydia says as she stands near the bed.

‘PRAISED BE, BITCH’ | At the end of the episode, while Commander Putnam is being taken away and Serena is learning the hard way that everyone knows Commander Waterford was having an affair with his previous ‘maid, Offred goes to the butcher… who says he’s got something special for her. He hands over the package she’d been trying to locate at Jezebel’s, and there’s a note: “Praised be, bitch. Here’s your damn package. XOXO, Moira.”

Back at the brothel, Moira’s got her mojo back. She makes a toilet-parts shank again and kills one of her johns, then dons men’s clothing and drives off in his car, blood on her hands and a giant smile on her face. Please, please get farther than Ofglen did, Moira. My heart can’t take much more of this.

Ready for the next episode? Read The Handmaid’s Tale Season 1, Episode 10 recap here!