A few episodes ago, I wondered whether or not The Handmaid’s Tale‘s Serena had any inkling that her husband had designs on the non-uterine parts of their live-in, state-sanctioned sex slave.

This week, my query is answered with a ringing slap to the face, followed by some peeing on a stick. (And yes, the sequence is just as jarring as it sounds.) And then stuff gets really real.

There’s a revelation in the first half of the episode that makes me gasp aloud. Later on, one character has a rare but huge win. Two characters resist with inspiring authority, and it makes me want to hug them both (even though I really hate one of ’em). And the end of the hour is perfect, given that we know there’ll be more Offred in the offing next season.

Read on for the highlights of the Season 1 finale, “Night.”

CONGRATULATIONS? | A flashback to June’s arrival at the Red Center finds Aunt Lydia surveying the “parade of sluts” and tazing June for staring too long at the uniformed handmaiden that pass by. The women are taught to stand, heads bowed and hands clasped, then they’re taken into a room and tagged with a red cuff painfully nail-gunned into the cartilage of their upper ears. In a voiceover, June remarks that in those times, all of the women looked at each other with terror. “We don’t look at each other that way anymore.”

Cut to present day, where June and NuOfglen are walking home from the butcher. “It’s their own fault,” she says, teeing up a quote that belongs on memes and coffee mugs: “They should never have given us uniforms if they didn’t want us to be an army.” At home, Offred hides the Mayday package between the wall and the tub in her bathroom, then tries to step back into her bedroom but WHAM walks into a slap that sends her flying, courtesy of the hotheaded mistress of the house.

“I trusted you. I tried to help you,” Serena yells, holding up the beaded cocktail dress Fred had Offred wear to Jezebels and then throwing it at her. There’s a lot more manhandling, and then Mrs. Waterford demands that her handmaid take a pregnancy test right then and there. I don’t know how Offred summons up enough pee under such circumstances, but she does, and Serena prostrates herself on the bedroom floor in front of the stick while Offred dazedly bleeds from the forehead in the bathroom.

When the allotted time has passed, a much softer Serena delivers the news: Offred is pregnant. “It’s the answer to our prayers,” Mrs. Waterford gushes. “You think I prayed for this?” says Offred, who apparently had all the effs knocked outta her earlier in the scene. But the fake mom-to-be doesn’t want to fight anymore. “God knows what’s in your heart,” she trills, skipping out of there, clutching the test like it’s a double-decker ice cream cone. 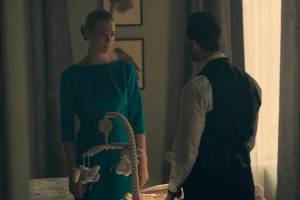 NICE TRY, FRED | Once Offred’s knocked-up-ness is ascertained, Serena sets about putting Operation: Nothing’s Gonna Screw This Up For Me into motion, starting with a surprise appearance in Fred’s study. When he enters, she’s already got the Scrabble set out. Remind me, is B-U-S-T-E-D a double- or triple-word score? She says she knows about Jezebel’s — “She left makeup on the collar of my cloak” — then warns him to keep his hands off their handmaid, not for fidelity’s sake, but because she’s afraid Offred will kill herself like the last ‘maid did.

Fred counters, saying that Serena “brought lust and temptation back into this house, on your back and on your knees. If I have sinned, then you led me to it.” Oh interesting, no? Is there something we don’t know about Lady Waterford? Or is he merely saying that by being less than passive in the marriage bed, she inflamed his baser desires? (Weigh in in the comments.)

The Commander is elated to hear that Offred is pregnant, and I’m elated when Serena says this: “It isn’t yours. You’re weak, and God would never let you pass on that weakness. You can’t father a child because you’re not worthy.” Then she turns and leaves, angrily swiping the board game and all its tiles off the table on her way out. WELL, DAMN. 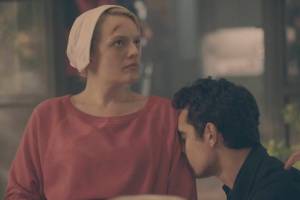 WHY SERENA IS THE WORST | Nick finds out about the pregnancy the next morning, after a bruised Offred limps down to breakfast. He tenderly puts his hand on her abdomen. “It’s terrible,” she whispers, fighting back tears. “No, it’s not,” he says, more gentle with her than we’ve seen maybe ever. Of course, Serena comes in and breaks the quiet moment by telling Offred they’re taking a drive, and no, Nick’s not needed.

The two women eventually arrive at a brick building, where Serena instructs the driver that Offred is not to exit the vehicle. Then Serena goes into the building and comes out with Hannah (!), who is wearing a pink, hooded cloak but appears to be happy and healthy. Offred’s joy at seeing her daughter is soon replaced by anger at being penned in the car, then despair when the girl returns inside and Serena comes back to the car. (Side note: Elisabeth Moss has been excellent all season, but she really ripped me apart here. SO good.)

“Please, Mrs. Waterford,” Offred whimpers as the vehicle speeds away. “As long as my baby is safe, so is yours,” Serena says, sending Offred into a raging tirade against her “deranged” mistress, but it doesn’t seem to have much effect. “Don’t get upset,” Serena replies in a clipped tone. “It’s not good for the baby.”

While the women are away, the Commander and the rest of the patriarchy decide that Janine’s commander deserves to lose a hand for his sins. And later that night, when Offred comes to the study to ask him to protect Hannah from his wife, all he wants to know is: “Is it mine?” She says, “Of course,” but he knows that she’s lying.

When she goes upstairs, she opens the package to find handmaids’ stories scrawled on whatever pieces of paper the women could squirrel away. Most of them include a plea for help. Offred falls asleep on the bathroom floor, surrounded by the missives.

AND IT STONED ME | When she awakes, it’s to three bells: “A death knell,” she voiceovers. But when all of the handmaids assemble in the park, they’re shocked when Aunt Lydia brings out Janine (!!), who’s to be stoned to death by the women for the crime of endangering her daughter. (Side note: I was sure that they would keep her around, unconscious, because healthy uteruses are in short supply. Honestly can’t decide if this is worse.)

But when it comes time for the ladies to kill their friend, NuOfglen protests (and takes a rifle butt to the head for her troubles), then Offred goes out of her way to show Aunt Lydia that she refuses to participate. THEN EVERYONE ELSE FOLLOWS SUIT. It’s amazing.

Back at the house, Offred voiceovers that she feels “serene,” even though she knows punishment is coming. When it arrives in the form of armed Guardians, Nick whispers “Just go with them. Trust me.” The Waterfords have no idea what’s happening as their handmaid is removed from the house, and neither does Offred, but she’s OK with that. “Whether this is my end of a new beginning, I have no way of knowing,” she thinks, climbing into the van and hearing the doors close behind her. “I have given myself over into the hands of strangers. I have no choice.”

VICTORY! | But wait! Moira makes it to Canada — something she doesn’t realize/believe until she sees a license plate — and connects with a refugee center, which provides the dazed survivor with food, money, a cell phone, etc. She’s shocked when Luke shows up at the center, but he explains that he’d put her on his notification list. “List of family?” she says, and when he replies in the affirmative, she drops everything and hugs him tightly as she completely goes to pieces.

Now it’s your turn. What did you think of the episode? Grade the finale via the poll below, then hit the comments with your expanded thoughts.

Ready for the next season? Read The Handmaid’s Tale Season 2, Episode 1 recap here!