“Our Father, who art in heaven,” Offred prays at one point in The Handmaid’s Tale‘s excellent Season 2 premiere, “Seriously? What the actual f–k?”

It’s a logical response, given what the character goes through in just the first few minutes of the season opener. And apparently, The Man Upstairs hears her entreaty, because by the end of the episode she’s on the path to no-more-red-robes-no-more-ear-tag freedom.

In addition, we get a very scary glimpse of the day that Gilead’s existence was all but cemented. (Seriously: I might just ask for hazard pay for having to recap this great-but-harrowing hour.)

Read on for the highlights of “June.” 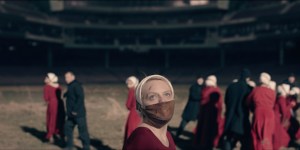 PRAY GOD YOU CAN COPE | Offred is riding in the back of the van that took her away from the Commander’s home in the Season 1 finale, driven by the armed Guardians Nick advised her not to fight. Given his whispered instructions, it seems like maybe this is her first step toward escaping Gilead. But when it stops and she’s hauled out by shouting men with barking dogs — and she realizes that they’ve rounded up all the other handmaids who refused to stone Janine — it’s clear that things are going to get really bad, really quickly.

June and the other women are muzzled with the same type of leather mask that the Guardians slapped on Ofglen when she went to “court,” then they herd them down a long, dark hallway. The women are confused and scared, but that fear turns to abject horror when they emerge from the tunnel and realize they’re standing on the grass of Boston’s abandoned Fenway Park… and that multiple gallows await them in what used to be the outfield. 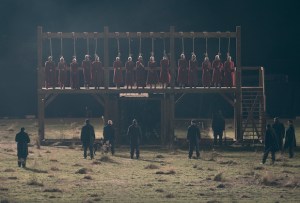 The ‘maids are marched up onto the platform and forced to stand as the nooses are yanked over their heads. Many of the women are sobbing. One of them pees herself. A few seek tiny comfort by trying to move their bound hands close enough to clasp fingers with someone else. When the rope passes over her face, Offred seems to snap out of the shock she’s been in and realize that she is probably going to die, violently, in the next few minutes. Her terror — all of their terror — rises to a crescendo. Kate Bush’s “This Woman’s Work” swirls in on the soundtrack. Offred tilts her head back and looks to the sky.

Then a man on the field yells, “By his hand!” and the platforms drop… but just a little: The whole thing was a fake-out designed to put the literal fear of God into the unruly handmaids, Aunt Lydia explains, pacing the field with a microphone that makes her voice boom through the loudspeakers. “Let this be a lesson to you,” she preaches to the dumbfounded women. In retrospect, it would have made no sense for a regime so focused on repopulation to lay waste to so many potential babymakers. But still: That sequence is excruciating.

CHANGE OF TUNE | Lest you think that Aunt Lydia & Co. are planning to let the handmaids off with just a scare, the next time we see the young women, they’re being made to kneel in the driving rain while holding stones at arm’s length. Anyone who lets her stone droop gets an electric shock. “There is freedom to and freedom from,” Lydia sermonizes from beneath an umbrella while the handmaids shake from fatigue and cold, explaining that their pre-Gilead lives were examples of the former. Freedom from, she adds, “is a gift from God.” All of the women on their knees look like they’d like to return that gift, pronto. 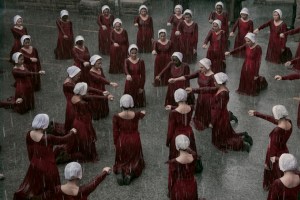 But when Aunt Lydia learns that Offred is pregnant, she immediately starts treating Commander Waterford’s sex slave like she’s a Disney princess. Offred is hurried out of the rain and brought into the Red Center for some dry clothes and warm soup, but the older woman’s tone goes from jovial back to judgy the moment that Offred turns down the meal. Janine is headed to the Colonies “because of you,” Lydia spits when Offred says that she couldn’t bring herself to participate in her friend’s murder. It’s clear here that Offred thinks being knocked up gives her license to do or say whatever she likes; Lydia shuts that down right quick by bringing her to visit Ofwyatt, a very preggo handmaid who tried to kill herself by drinking drain cleaner and is serving out her confinement literally chained up in a room with just a bed and rocking chair in it. Offred quickly backs down and starts eating the soup she turned down moments before — and continues to do so as the bedraggled ‘maids are brought into the building and, one by one, handcuffed to an industrial kitchen range’s burner while an Aunt turns on the gas flame. They scream. Offred, powerless to do anything about it, sips her broth.

IT BEGINS | Let’s pause for a really disturbing flashback to the pre-Gilead days. June and Luke discuss trying to have a second child, and they’re goofily cute as they agree that she shouldn’t refill her birth-control prescription. And apparently, per federal (?) law, if he hadn’t been on board with her using contraception, the pharmacy wouldn’t have let her have the meds. Fun!

At work, she’s daydreaming a little when Hannah’s school calls: The girl has a slight fever, and because the administration couldn’t reach June, they sent the kid to the hospital. So June hurries over, only to be questioned by a very judgmental nurse who refuses to refer to June by anything other than “Mrs. Bankole” — even though June repeatedly informs her that she goes by her maiden name, Osborne. “Children are so precious,” the nurse says, implying that June and Luke don’t feel the same simply because they chose to give their kid Tylenol in the morning (she was doing fine! really!) rather than keeping her home from school.

Eventually, June is allowed to bring Hannah home. That’s where they find Luke, staring at a breaking news report on the TV: The Capitol massacre that the series has referred to before has just happened, and the federal government has declared martial law. Moments later, there’s an explosion at the White House. “What is happening?” June asks in shock before heeding an ailing Hannah’s request to have her mom cuddle her in bed. 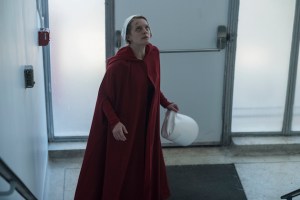 JUNE, OUT! | In the present, Offred, The Commander and Serena visit the obstetrician. The doctor happily informs the Waterfords that the baby seems fine, even at this early stage. (Offred is about five weeks along.) They kvell over the ultrasound, which is positioned so that the handmaid couldn’t see the first image of her child even if she wanted to. At one point, when they’re alone, Serena slinks over to Offred’s side of the curtain and warns, “I will not have anymore recalcitrance.” But Offred merely smiles and warns Serena not to get upset, because “it’s bad for the baby.”

Eventually, everyone leaves Offred to get dressed. “Godspeed, June,” says a medical tech who exits the room just before she gets off the table. Is he a friendly? Sure seems so, given the key that Offred finds in her boot. That key unlocks an alternate exit to the exam room; it leads down a back stairwell, to a dark hallway, and eventually Offred finds herself in the back of another vehicle — this time, a refrigerated butcher’s truck. The moment she’s inside, someone closes the door from the outside, and the truck takes off.

She winds up at a building in Boston’s Back Bay area; the driver lets her inside and kindly informs her that someone will come for her. Turns out, Nick is waiting for her, and she gives him an exuberant hug as he lays out the plan.

She’s to change clothes and cut her hair; they can’t get her out of the city yet, but it’s in the offing. So she strips out of her robes and places them in an incinerator. Wearing only her underthings, she takes the proffered scissors and hacks her hair into an uneven bob, then adds the hair in with her scarlet clothing. And when she realizes that she’s going to have to get rid of her Gilead-issued tag, she steels herself (and I close my eyes) and then she uses the scissors to cut the small piece of metal out of the cartilage at the top of her ear. Holy God, indeed. Drenched in her own blood, June — yeah, I’m going to start referring to her as June all the time now — tosses the tag into the fire and basks in the first moments of her new freedom. Blessed freakin’ be!

Your turn. Grade the premiere via the poll below, then hit the comments with your details thoughts on the episode.

Ready for the next episode? Read The Handmaid’s Tale Season 2, Episode 2 recap here!