Guys, Alexis Bledel kills it in the second episode of The Handmaid’s Tale‘s second season.

By “it,” I mean, “a holier than thou mistress who becomes emblematic of all of Gilead.” And by “kills,” I mean… kills. Dead. Done. See ya.

Yes, we’ve seen Emily/Ofglen act with swift violence before — remember the car incident that got her sent to the Colonies in the first place? — but we’ve never seen her be so cunning while doing so. It is chilling. And also awesome.

Episode 2 also gives us a flashback to when things started getting really bad for Emily, and that’s less awesome and more make-you-want-to-die-from-sadness. (In other words: This is a tough episode, and we haven’t even gotten to the peeled-off thumbnail and radiation sickness yet.)

Throughout, Bledel is magnificent. There’s a reason The Artist Formerly Known as Rory Gilmore won that Emmy, am I right? Read on for the highlights of “Unwomen.”

ALL THE SCREWED THAT’S FIT TO PRINT | June is transferred to a giant, abandoned building and told that she’s to hang tight there until someone comes to get her. As she explores the structure, we realize that it’s the former home of The Boston Globe… and then June realizes that it was turned into “a slaughterhouse” — as she tells Nick when he arrives — where people were hanged and shot in the cavernous room that housed the printing press. 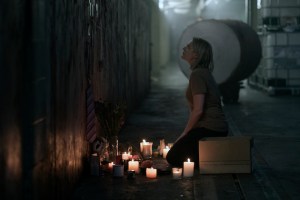 Her fear of being caught, coupled with her sadness over the senseless deaths and her frustration over having to stay put for a while, explodes when Nick tells her it could be weeks before she’s able to move to the next stop on her journey. She screams at him that she’s going to get Hannah and drive north, then demands that he give her the keys to his car. He calmly hands them over, then surprises her by offering her his gun, as well. She gets as far as climbing behind the wheel before she realizes how there’s no way she can leave, so she pounds on the wheel a couple of times in frustration and then comes back into the building, where she and Nick have angry, hair-pulling, standing-up sex right there on the loading dock. Later, upstairs, they have sweaty, lying-down sex. And when he says he doesn’t think he can go again, she simply commands, “Try.”

MAKING AMENDS | After he leaves, she watches a Friends DVD on a laptop, then starts collecting personal items from the newsroom’s cubicles. She brings them downstairs and tapes them to the wall where people were lined up and shot; after lighting some candles, she holds a vigil and prays for the people — and herself — in peril there.

WELCOME TO THE COLONIES… | For the first time since she was hauled away, we catch up with Emily. As forecast, she is doing hard physical labor in the Colonies, the radioactive wasteland where those who break Gilead’s laws — and are usually no longer able to conceive — are sent to work and die. The women toil in the fields, breaking up the land and shoveling it into bags; overseers zap them if they pause for a moment or dare to look around. And when a bell rings, the women are made to kneel and thank God for his goodness. 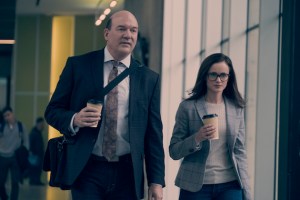 A flashback to Emily’s pre-Gilead life shows her lecturing undergrads on cell biology; not long after, her boss (hi, American Horror Story‘s John Carroll Lynch!) gently informs her that she won’t be teaching at all in the coming semester. Apparently, someone saw the photo of her, her wife (hi, Veep‘s Clea DuVall!) and their young son that Emily uses as her phone’s lock screen, and thought it was inappropriate and instrumental in “not maintaining a healthy learning environment.” The conversation is taking place after the D.C. massacre we saw happen in the previous episode; Emily’s boss, who is gay himself, admits that he’s taken the photos of his boyfriend/husband from his office to protect his job — even though it’s made his partner call him a “collaborator.” Emily is adamant that she’ll continue teaching. “They can’t scare us back into the closet,” she vows.

But soon after, her boss is thrown from a campus building with a noose around his neck; the word “faggot” is spray-painted on the sidewalk beneath where he dangles, dead. Emily and her wife see this as a horrifying sign that they need to get out quickly, so they join the hordes of people thronging Logan Airport and trying to get on a plane to sanity. Everything seems like it’ll be OK — because Sylvia is a Canadian citizen, she and their son are instantly cleared for travel. But Emily will need a stamp… that she is soon denied, because Gilead doesn’t recognize their marriage and “it is forbidden.” When Emily demands a lawyer, she is manhandled back into her seat. So Sylvia and Oliver kiss her goodbye — wow, DuVall and Bledel are so achingly good in this largely dialogue-free scene — and they ride an escalator up to the gates while Emily watches, crying, as the loves of her life leave her for the last time.

… BITCH! | In the present, a Commander’s wife (hi, Empire‘s Marisa Tomei!) arrives in the Colonies, and it’s enough of a rarity that everyone stops and stares. All of the women either shun her or are openly hostile toward her, so she’s very appreciative when Emily seems to take pity on her one evening. Everyone in the barracks is in rough shape from so much radiation exposure — one woman removes her own fingernail after it loosens while she’s washing her hands — but Emily dresses the Mistress’ blisters and offers her expired antibiotics to help combat the effects of the e.coli in the water. While Emily is wrapping the woman’s hands, she learns that the Mistress was sent to the Colonies because she had an affair, but she thinks that God will deliver her from her current situation, because she truly loved the person she bonked. She wonders why Em is helping her. “A Mistress was kind to me once,” Emily replies quietly.

But as it turns out, all of that was a lie. Emily, you sneaky little minx, you! When the new woman is puking later that evening, Emily calmly asks if she took the pills. When the Mistress says that she did, and Emily says nothing, realization dawns quickly. “What did you give me?” the woman demands, writhing in pain on the floor. “Every month, you held a woman down while your husband raped her,” Emily reminds her. “Some things can’t be forgiven.” Then she leaves the older woman to die alone. 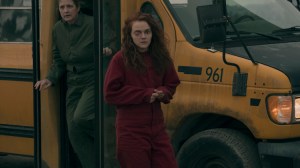 In the morning, Emily’s bunkmates are heartened to see the dead Mistress, strung up like a scarecrow outside their building. “There will be consequences!” one of the overseers shouts, but aren’t there always? And then when the latest batch of newbies arrives, Emily’s face lights up: Janine is on the bus! They briefly hug, then Janine is pulled away.

Ready for the next episode? Read The Handmaid’s Tale Season 2, Episode 3 recap here!