The next time you’re squished into an economy seat on a cross-country flight and you can’t get up and pee because the beverage cart is blocking the aisle, comfort yourself with this thought: At least my trip is going better than June’s.

Because this week, The Handmaid’s Tale stuffs the former ‘maid into a plane’s cargo hold and promises her freedom… until a hail of bullets brings her voyage on Get Me the Hell Outta Here Airlines ends abruptly — and far short of its desired destination.

Meanwhile, in Canada, Moira struggles with what seems like a heaping dose of PTSD and survivor’s guilt. Read on for the highlights of “Baggage.”

THE RISE OF EVIL | June has been living at The Boston Globe for two months. She’s spent her time running around the building to rebuild her stamina (to Santigold’s awesome “GO!,” in case you want to add it to your workout playlist), fleshing out her vigil to the people who were killed in the building, and slicing up copies of the paper to make a Birth of Gilead crazy wall of which Homeland‘s Carrie Mathison would approve. “You were there, all the time, but no one noticed you,” June voiceovers as she tapes up articles outlining an erosion of civil liberties and listens to archived broadcasts about the Sons of Jacob (aka the religious/military group that created Gilead).

But then June thinks a minute and realizes that someone had noticed a disturbing cultural shift: her mother. She flashes back to a childhood memory of accompanying her mom (hi, 24‘s Cherry Jones!) to a protest and watching the older woman get super into it. “I loved seeing my mother like that,” she recalls. Her reverie is interrupted by Nick, who has woken up and is preparing to leave. He tells her that she might be on her way soon. “Hannah?” she asks. “I’m trying,” he replies. She refuses to move along the underground handmaid railroad without her daughter, but Nick counters that her getting out safe is better for everyone. “‘Better’ never means ‘better for everyone,'” she says flatly, echoing what she told Commander Waterford last season. 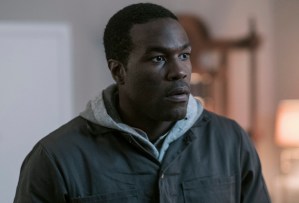 GAMETIME DECISION | Soon, the man who usually delivers June’s supplies shows up to escort her to her next stop. He drops her at a warehouse where old street signs are stored (side note: did Gilead’s powers that be take down all of the existing signs? That seems so unnecessary and/or confusing, even for a group that wants to rewrite the world. Couldn’t that have waited a while?) June soon realizes she’s not alone there: A man in coveralls says he’ll take her to an airstrip west of Worcester, and she’s to leave on a black market puddle jumper to Canada the next day. (Another side note: . The man’s name is Omar.)

But just as they’re about to get in his van, the man gets a text and tells her they have to abort the mission. “The safehouse isn’t safe,” he says, trying to scram as fast as he can. But June won’t let him leave, standing in front of his truck and repeating “No!” with tears in her eyes until he relents and says she can get in.

The man definitely thinks this is a bad idea, but he brings June to his home. That’s when we learn he’s part of the econopeople caste, or those who perform domestic and agricultural work in Gilead and are allowed to be married, have children, etc. “It’s where I’d live if I weren’t an adultress, if I’d gone to the right kind of church, if I’d played my cards right, if I’d known I was supposed to be playing cards,” she voiceovers as the man sneaks her into the dormitory-style compound.

The man has a cute son and an angry wife who eventually agrees to let June stay but really isn’t happy about it. “I don’t know how you could give your baby up to somebody else,” she tells June, who responds that she’s trying not to do so. “I would die first,” the woman spits. “Yeah, I used to think that, too,” June says. The family goes to church, warning June to be quiet and saying they’ll be back by 2 pm. 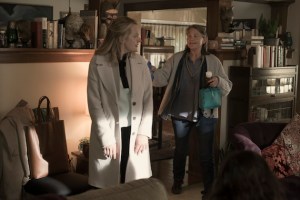 DONE WAITING | That leaves June with plenty of time to poke around (she discovers a Koran and prayer rug hidden under the bed while she’s hiding from a neighbor), straighten the kid’s toys and reminisce about her own mother, who often served as someone who shielded women at abortion clinics and who apparently disapproved of June’s choice of both career and marriage. “I sacrificed for you, and it pisses me off that you’re just settling,” she says. “It’s time to get out in the street and fight, not just play house.” June doesn’t fight back, but the criticism stings; when June is in the kitchen, she blinks back tears.

In another flashback, June remembers watching the indoctrination slide show at the Red Center, right after she and Moira were made handmaiden. Aunt Lydia is droning on about how humans “poisoned everything precious to us” when Moria suddenly, surreptitiously grabs June’s hand: June’s mom is shown working in the Colonies. In bed that night, the pair wonders how Gilead got her, given that all the clinics destroyed their records. “I told her it wasn’t safe, what she was doing,” June whispers. “You were right,” Moira says. “So was she,” June replies. “She knew.”

In the present, it’s nearly 5 pm, and the family hasn’t returned. Thinking of how she waited too long to get out when Gilead was on the rise, June changes into some of the wife’s clothing, takes the map the husband left her and walks out among the masses.

THE GREAT (NEAR) ESCAPE | I’m not sure exactly how, but June manages to keep herself together even though she has to walk by multiple Guardians on her way to the still-in-use commuter rail. Her freak-out factor increases significantly when she surreptitiously checks the map Homer/Omar gave her and it looks nothing like the route map on the wall. So she rides to a stop, then gets out… and jumps into the woods the moment the Guardians policing the pathway near the train look away.

Eventually, after crossing many fields in what are probably terribly uncomfortable shoes, June makes it to the airfield and waits until sundown for the arrival of her plane. When it does, the pilot is wary of her until she shows him her torn ear; he lets her scurry into the cargo hold, along with a former driver of a Commander. The pilot fires up the engine and all seems like it’s going to be OK; June’s thoughts turn to her mother and her daughter. “I wish my mother were here… so I could tell her I forgive her. And then ask Hannah to forgive me,” she voiceovers.

But then, just as they’re about to take off, the plane comes under fire. Several vehicles drive alongside it and force it to stop, and wow that sentence really doesn’t convey how freaking terrifying this entire sequence is. The pilot is dragged out and shot in the head. The driver, who took a bullet even before the plane came to a stop, is pulled out, too. And then all that’s left is June, who frantically clambers around the cabin, trying to evade the men who demand that she get out, as well. They eventually grab her. And that’s where her story ends for now. 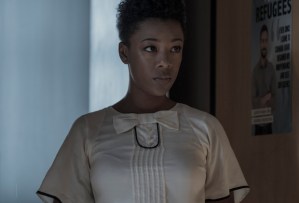 ‘I’M RUBY’ | In Canada, we get a glimpse of Moira’s home life — she’s living with Luke and Erin, the kinda-mute blonde — and working at the refugee center. One day, a man she’s helping has to take a minute to process what’s really happened to him: He was in the U.S. Army but was turned into a Guardian, and he remembers seeing a guy he dated in college hanged as a “gender traitor.” She gently points him toward the center’s trauma counselors, promising, “It gets easier.”

But… does it? Sometime later, Moira is somberly hanging out at a club when a woman catches her eye. They wind up in the bathroom, where Moira — how shall I put this? — blessed be’s her new friend’s fruit. But when the woman offers to reciprocate, Moira shuts her down. Right before she leaves, they make awkward introductions. The hookup’s name is Caitlin. “I’m Ruby,” Moira says, giving the name she used at Jezebel’s.

Ready for the next episode? Read The Handmaid’s Tale Season 2, Episode 4 recap here!