Need to catch up? Check out the previous The Handmaid’s Tale recap.

There comes a point in many pregnancies when the mother-to-be thinks, eh, screw it. And man, does June come to that point HARD in this week’s The Handmaid’s Tale.

Granted, in the world outside of Gilead, that moment of maternal meh-ness often arrives in relation to something annoying (like smiling for the millionth time as someone goes in to pat your distended belly) or simply no longer physically possible (like bending down to tie your sneakers). My own pregnant pause occurred in my ninth month, when I put in a delivery order for the closest Mexican restaurant… which happened to be on the first floor of the building where I lived. (OK, so I’d done that earlier in my pregnancy, too. At least in the first and second trimesters, I’d felt bad about it.)

In “Other Women,” though, a newly re-tagged and returned June (I’m not going to call her Offred anymore, cool?) keeps her fighting spirit alive until it becomes clear that doing so is literally killing other people. So she gives up — because giving up seems like the only way forward — and becomes the model handmaid. 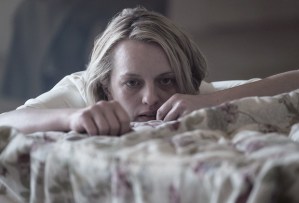 WELCOME BACK | At the Red Center, Offred is chained up like the pregnant woman we saw a few episodes ago. She’s about to lose her mind from the boredom when Aunt Lydia enters, bearing a brand-new red dress. The older woman refers to her as Offred. “It’s June,” the captive grits out. “You know my f—king name.” But Aunt Lydia is undeterred: The Waterfords are giving their former handmaid a “trial run” back at the house, and she suggests that the handmaid be grateful for the chance at a do-over: “You see, June will be chained in this room until she gives birth, and then June will be executed. Offred has an opportunity. It would be better for the baby.”

And just like that, June is back in her handmaid gear, being received by the Commander and Serena while Aunt Lydia watches over the proceedings. The official story is that June was kidnapped. “Kidnapping is a story everyone can life with,” June voiceovers, noting that the subterfuge allows the Waterfords to keep their baby and gives Gilead a patina of “reach and might.” Lest you think that June’s reacclimation into the household will go easily, she’s barely stepped back into her bedroom for the first time before Serena approaches and grabs her by the throat. “Ninety-two days!” she hisses, near tears as she references the length of June’s absence, but June is one bad mama. “Serena, remember,” she taunts her mistress, parroting Serena’s own warning from the Season 1 finale, “as long as my baby is safe, so is yours.”

ALL OF THE SHOWER, NONE OF THE POWER | Aunt Lydia is still there the next morning, and she wakes June up and tells her to get ready to come downstairs. After she leaves the bedroom, Rita pulls the packet of letters June was hiding and tosses it at her: Someone from Mayday was supposed to come get them, but they haven’t, and she’s afraid of getting caught with the contraband.

Downstairs, Lydia makes June a disgusting green juice and then forces her to drink it. So June does — and then regurgitates it up a moment later, right there on the butcher block. “We’ll make another,” the matron says, undeterred. “You need your vitamins.” On the plus side? Nick is still working for the Waterfords, though he barely acknowledges June, who beams at him when he walks into the kitchen. 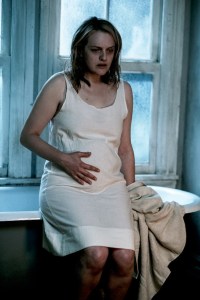 But not too long after, June has a bigger problem to deal with: Serena’s baby shower. A bunch of other wives fill the living room, their handmaids standing behind them; June is relegated to a corner, where she is largely ignored. As the wives coo over how much of the pregnancy Serena missed, thanks to the “kidnapping,” one of the ladies in green recalls feeling her handmaid’s baby kick for the first time. Serena glosses it over, saying that it’s too early for that. “I felt the baby kick for the first time last night,” June blurts out, and if there had been music playing, the needle would’ve screeeeetched right off the record on that one.

THE TRUTH OF CONSEQUENCES | Later, June angles for a moment alone with one of the ‘maids who was involved with Mayday. The rebellion has gone silent, the other woman says, and the group is done helping handmaids. Oh, and Ofglen’s tongue was cut out after she stood up for Janine. A stricken June is horrified, but the handmaid says it wasn’t her fault. Well, “not that part.”

While the mistresses and handmaids wrap up the shower with an elaborate ritual involving string and repetition of the phrases, “Let the little children come to me/for such is the kingdom of Heaven,” June has a flashback to when Luke’s wife, Annie, confronted her after a yoga class. In the memory, Annie asks June to back off and give her and Luke time and space to work on their marriage. The exchange gets more and more tense, until Annie — who at has been separated from Luke for three months — calls June a “selfish bitch” and vows that Luke will come back to her.

Luke is leaving an angry voicemail for his estranged wife when June returns home, having second doubts about their relationship. After all, he and Annie weren’t even separated when she and Luke first got together. “What if I hadn’t come along?” she wonders. “I love you more than I’ve ever loved her,” he says. (Side note: I know he’s going for reassuring here, but all I could think was, “Yeah, but is that what you’re going to tell the next woman, too?” I know. I feel horrible. IT’S LUKE!) Anyway, he reiterates that nothing Annie said matters, because they’re going to get married, and he’s going to make June happy.

PARTY FOUL | After the wives have left the shower, June, Rita, Aunt Lydia and Serena clean up and look over the pile of presents. “You know, after my shower, we ended up giving away half our gifts,” June says, in what seems like an earnest attempt at making small talk/finding common ground. But it backfires, and Serena works herself into a fury. When poor Rita tries to step in and defuse her mistress, the blonde knocks her to the ground. Aunt Lydia decides now is a great time for June to stretch her legs, and frog-marches her out of the house. Meanwhile, Serena goes to Fred and demands that June live out the rest of her pregnancy at the Red Center. He’s against the idea, framing it that Serena is entitled to every moment of the pregnancy experience she can get, and she’s missed so much already. June is “nothing,” he says, and Serena shouldn’t even think about her. 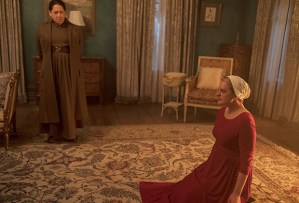 OMAR RETURNS | Aunt Lydia takes June to the river and forces her to look at the latest hanging victim. “I believe you know him. He drove a bread-delivery truck?” the older woman says. June collapses upon realizing that it’s Omar, and he died as a direct result of helping her. “The wife will redeem herself by serving as a handmaid. The boy will never see his mother again,” Aunt Lydia says, tying the entire terrible story up with a bow. “Such a selfish girl,” she continues, looking at June. “Who killed him? Answer me please. Whose fault was it?” June is crying. “My fault,” she whispers.

Aunt Lydia then draws another barrier between who June was and who she is now. “June did this. June ran away. June consorted with terrorists. Not Offred. Offred was kidnapped. Offred is free from blame,” Lydia says, hugging June to her shoulder. “Offred does not have to bear June’s guilt.” June, the very definition of undone, weeps in earnest and clings to Lydia.

Back at the house, a docile June kneels before the Waterfords and asks if she can stay. “Please,” she pleads, “let me try to be good.” That’s satisfactory for Aunt Lydia, who gathers her things and goes, saying that everyone in the house will “find your way.” Later that evening, Serena smokes a cigarette in the nursery, then creeps into June’s room and spoons her, palming her abdomen and talking to the unborn child. “All will be well, and all will be well, and all manner of things will be well,” she whispers. “Mama loves you.” June, who is awake, is unsettled. And can you blame her?

After Serena leaves, June crawls into the closet and feels for the etching from the former handmaid — but it’s been plastered over. She flashes back to a morning when Hannah was a baby, when she saw Annie watching them and Luke from across a crowded restaurant. She voiceovers that she has screwed up so much. “I might as well be dead,” she says. “Please, God, let Hannah forget me. Let me forget me.”

The next morning, Nick furtively apologizes for her recapture, saying he did everything in his power to get her out. “We’ve been sent good weather,” she says, smiling benignly as she passes him in the driveway on her way to the market. He looks confused. She waits on the other side of the gate, gazing around with a placid look on her face. “We’ve been sent good weather” she repeats to herself, possibly a little unhinged, waiting for her handmaid partner to swing by and pick her up.

Ready for the next episode? Read The Handmaid’s Tale Season 2, Episode 5 recap here!