June’s desperate decision to become the model handmaid ends abruptly in this week’s Handmaid’s Tale — praise be! — when she wakes up in a hospital bed, surprised she’s alive and shocked that her baby is, too.

There’s a copious amount of blood and tears that get us to that point, and we’ll go into all of that in a moment, but let’s take a second to celebrate one of this great-but-bleak show’s tiny wins: June’s fighting spirit has returned, and she’s determined to win freedom for her kid and herself.

In other, not-so-life-affirming news, Nick gets married. Guess what? It’s even worse than you think. And life in The Colonies is starting to take an even bigger toll on Emily.

Read on for the highlights of “Seeds.”

BLOODY AWFUL | In the middle of the night, June gets up from bed to take a drink from the faucet in her bathroom. She notices the bundle of contraband letters wedged between the tub and the wall, then takes them downstairs and starts to burn them in the kitchen sink. That’s where Nick finds her and quickly stops her; to my great relief, it looks like she only torched a couple. “I’m not allowed to have these,” she says, dazed. “I’m not supposed to be out of my room at night.”

The next day, Aunt Lydia is there to weigh and measure June. Serena bristles at the older woman’s presence, wondering why they can’t rely on the obstetrician’s visits to make sure everything is progressing correctly. “There’s so much more to a successful pregnancy than can be measured in a doctor’s office,” Lydia chrips, calling out the “mood within the household” as a crucial influence on neonatal gestation. When she and Aunt Lydia are alone, Serena complains that June is “quite unlike herself,” which causes the older woman to make a note of something, then leave a little abruptly.

Later on, June is in her bathroom when she realizes there’s a little blood on her underwear: She’s bleeding, but says nothing. When she and Serena go on a walk around the neighborhood, Mrs. Waterford reprimands June for not talking enough. And upon their return, Nick suggests that he’s worried about June’s “mental state.” “Maybe you should take her to see a different kind of doctor,” he suggests — which, given his taciturn nature, is the equivalent of him reciting The Iliad — and adds “She doesn’t have anyone to look out for her.” Serena gives him a very interesting look. “It appears that she does,” she says.

Then Serena makes a beeline to where Fred is having breakfast. He pays her little mind, but when she brings up the fact that Nick is concerned about June’s welfare, that catches the commander’s attention. And it’s not long before Fred is telling Gilead bigwig Commander Pryce that Nick deserves a promotion — oh, and that promotion comes with a move to Washington? YOU DON’T SAY. Pryce is a little suspicious of Fred’s sudden interest in staffing, noting that if Nick is as great as Old Beardy says, “I’d find a way to keep him around.” 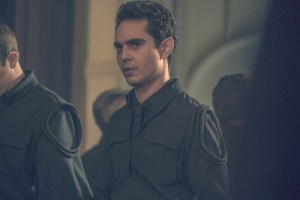 A TOAST TO THE GROOM, TO THE BRIDE | Later that day, June takes a bath. Her continued bleeding turns the water red, and it’s a horrifying visual as the handmaid merely sits in the tub and accepts that something terrible is happening. She dresses, padding her undies with some rolled-up toilet paper, then joins Serena as they had out to the “Prayvaganza” gathering that Fred has been instrumental in organizing. Before June leaves, Rita notices that the handmaid is shaky on her feet. The cook is so worried, she lightly touches June’s hand, but June gently shakes her off. “I’m fine,” she says as though her mind is elsewhere. “Thank you.”

At the big ceremony, which in no way evokes a Third Reich pageant, Pryce announces that they’re honoring the most valiant Guardians for their service. Nick is up on stage; Serena and June watch him from the audience. The men are handed boxes… and then women in white with veils completely covering their faces are paraded out and paired up with the men. Guess what? It’s a wedding. Serena looks pleased. June is holding back tears. Nick looks like he’s going to throw up.

Still, when Pryce asks all of the men, “Do you accept this sacred duty?,” Nick responds, “I do” like everyone else. The boxes are opened — there are rings inside (I expected military medals) — and then the women’s veils are lifted. I’ll give you my notes, verbatim, from when I watched for the first time: OH GOD THESE ARE LITTLE GIRLS WELL PRETEENS BUT STILL THIS IS BAD. “They look so beautiful,” Serena coos. June is having an out-of-body moment, thanks to the shock of what’s unfolding before her. (Also, the constant blood loss.) But she pulls it together and starts to clap. When Nick looks up, he sees June applauding and gazing benignly at the ceiling.

At home, we learn that Nick’s new missus is named Eden Spencer. She and Nick sip Champagne with the Waterfords while June is dismissed to her room. The handmaid undresses, and we see that her underwear is soaked with blood. She makes it over to the window seat, sits down heavily, and slumps to one side. 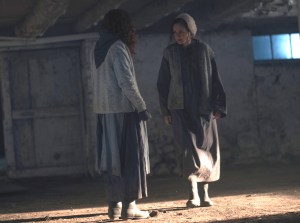 ‘COWS DON’T GET MARRIED’ | While we pause on that pleasant visual, let’s go to the only place that makes bleeding out in an attic bedroom seem desirable in comparison: The Colonies! Emily is as angry as ever about the fact that Gilead has sent her — and everyone around her — there to work until they die, and Janine’s assurance that God is holding them in the palm of his hand doesn’t do much to lift her up. “He couldn’t hold you in his palm someplace else? Like Bora Bora?” Emily asks.

Over the course of the episode, one of the very sick workers, Kit, deteriorates rapidly. After she collapses in the field, it becomes clear that the end is very near. So the women arrange a marriage for Kit and her girlfriend Fiona, who met Kit in The Colonies 11 months earlier. A rabbi who’s also a prisoner oversees the ceremony, which was Janine’s idea.

The entire thing infuriates Emily, who’s just realized that her teeth are starting to fall out from the radiation and therefore has a leetle less patience than usual. “What if the aunts saw us?” she yells at Janine after she pulls her away from the wedding, pointing out that the overseers could starve them, or worse. Janine counters that Kit will die happy, and isn’t that worth it? “Gilead took your eye. They took my clit. Now we’re cows being worked to death, and you’re dressing up the slaughterhouse for them. That’s the f–king problem,” Emily spits, walking away. “Cows don’t get married,” Janine calls after her, and my god, I love this girl.

Because no one in this show is allowed to be happy for more than five seconds, Kit dies the next morning. Emily, a bit chagrined, tells Fiona that it was a beautiful ceremony. Then Fiona helps bury her wife in a field obscenely full of Colonies dead. 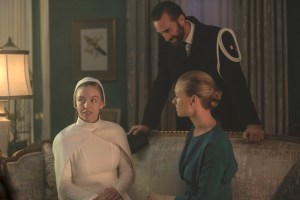 WEDDING NIGHT FRIGHT | While Serena helps Eden get ready for her wedding night, and slightly scandalizes her by mentioning that sex “can feel wonderful for you as well as for him,” Nick has a drink with Fred in his study. The driver thanks his boss, who mentions that he had to pull strings to secure him his bride. “By God’s grace, I’ll have a child of my own someday, sir,” Nick adds, AND THAT’S WHEN I REMEMBERED THAT WATERFORD TOTALLY KNOWS THAT JUNE’S BABY IS NICK’S AND NOT HIS SO WELL PLAYED THERE, NICK.

In the driveway, as Nick steels himself for the return to his apartment, he notices something in the bushes. Oh no, it’s June in the bushes beneath her window, bloody and unconscious. He grabs her, pulling her into his arms, and yells for help.

BABY, IT’S YOU | June wakes up in a hospital room, with Serena in a chair next to her bed. The commander’s wife is incredibly happy to see her handmaid awake; when she runs to get a doctor, June pulls up her gown and notices the fetal monitor strapped to her belly: The baby is still alive.

Realizing that the looking glass opposite her bed is a two-way mirror and she’s likely being watched, June ducks under the blanket and whispers to her baby. The speech is simple but stirring, so here it is in its entirety:

Ready for the next episode? Read The Handmaid’s Tale Season 2, Episode 6 recap here!