Though this week’s installment of The Handmaid’s Tale is titled “First Blood,” sadly, it does not depict June tying a bandana around her head, Rambo-style, and meting out revenge to those who have hurt her. (To be fair, that likely would have to be a two- or three- or 10-part episode, right?)

But that doesn’t mean that someone else doesn’t go to extreme measures to communicate her dissatisfaction for Gilead’s regime. And while in real life I do not condone violence, I’ve got to say: Watching one of the fictional handmaids lay waste to a whole lot of commanders does hit the spot — especially if it’s a hint that the new, terrible world order is on its way to tumbling.

Read on for the highlights of Episode 6. 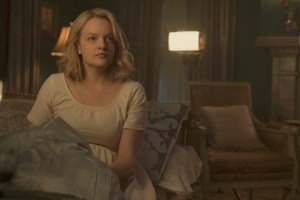 DETENTE | During an ultrasound, the doctor tells Serena that June’s bleeding was due to a subchorionic hematoma and that the handmaid will need to take it easy, but that she should be fine. Also: “This baby needs harmony within the household,” he advises, which seems to prompt Serena to remember that the sex slave imprisoned within her household is a person, too. She pulls back the screen blocking June’s view of the ultrasound and asks her if she wants to see. They both watch the baby, who is doing just fine, and June cries. “Hello,” she whispers.

At home, Serena trips over herself to make life better for June, allowing her to skip that barf-inducing green juice and insisting she sleep in the sitting room so she doesn’t have to go up and down the stairs. When Nick gets a moment alone with June, they process his unexpected wedding from the last episode: She’s not pleased, though she understands he didn’t have a choice in the matter. “We can’t keep sneaking around anymore. We have to be smart,” she whispers, but Nick counters that he thinks about “the three of us” all the time. She grudgingly admits that she does, too.

That night, Nick and his new missus have dinner at his apartment. She makes sure to tell him that her mother prepped her for everything that would be expected of her as a wife, but he avoids any more discussion of that and steps outside to smoke, instead.

Meanwhile, Serena sits by the couch while June gets ready to go to sleep. There’s a definite thawing between the two of them as Mrs. Waterford says she’ll look into getting a pregnancy pillow for the increasingly physically uncomfortable handmaid. “What’s it like to feel that life inside of you?” she then asks tentatively. June takes pity on her mistress and lets her put her hands on her belly, where the baby is moving. “It’s a miracle,” Serena says, awed, and June agrees.

HEY, BIG SHOT | Flashback time! As Serena nervously prepares to speak in front of a crowd on a college campus, Fred praises her, crediting her for getting the chance to discuss their policies and ideas in the mainstream. (The stop is apparently one of a few to promote her A Woman’s Place book.) But the audience is already booing loudly before she even gets to the podium, and the crowd is carrying signs that say “U Are Not Welcome Here” and “Stop Nazi Hate.” She’s barely begun talking when a woman stands up and calls her a foul name, then someone hucks a water bottle at the stage. The organizers hustle her out, with Fred loudly protesting that his woman has a right to speak, because “This is America!” Oh, the irony.

On their way out of the building, Serena makes another attempt to get her message across. She cites a statistic that the rates of healthy births dropped 60-something percent in the past 12 months, screaming that the “spoiled, privileged” students should “embrace your biological destiny!” As you might imagine, that doesn’t go over very well, and the Waterfords scurry for their car. But Serena is energized: She’s envisioning an augmented book tour — and Fred is on board — right up until the moment when a sniper fires at them. She takes a bullet right in the abdomen, which probably explains why the Waterfords eventually need a handmaid in the first place.

The next time we see Flashback Serena, she’s in the hospital, demanding that Fred refer to the shooter — who’s still at large — as a “terrorist” in the statement they’re drafting. Then her pain flares. While Serena is wincing, Fred tearfully laments that he ever “let” her speak in public. “Be a man,” she reprimands him sharply. (Side note: The power dynamic in this household, both before and after Gilead’s rise, is fascinating to me.)

Later, Fred and some of the other commanders (if they’re even called that yet) have the shooter bound and gagged in a secluded, wooded area. Fred wonders if the man knows what it felt like for him to watch his wife bleed out. The man cries and makes a lot of noise, then starts screaming when Fred fires a bullet into the chest of the bound and gagged woman next to him. “Now you do,” Waterford says as the other men drag the shooter away. 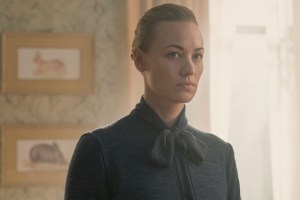 MOTHER TO MOTHER | In the present, Serena’s “Be Nice To The Woman Your Husband Ritually Rapes Each Month” campaign continues with a surprise lunch for June; she’s invited her “friends” — aka four other handmaids, including Alma and NuOfglen — for the meal. Conversation is incredibly stilted, particularly when Serena starts asking questions directly to NuOfglen, forgetting that the ‘maid had her tongue cut out for standing up for Janine. But June saves her mistress by prattling on about brunches of the past on Boylston Street, and the mood eases.

Later, Serena takes June up to the nursery to see how she’s decorated it. June seems very sincere as she praises the décor, reminiscing about how Luke had put up glow-in-the-dark stars on the ceiling of Hannah’s bedroom. But when she asks to see Hannah, just for a moment, Serena’s iciness returns in full force. “Absolutely not,” she says as June pleads for just a glimpse of her child. “Get your things out from downstairs. I think it’s time to go back to your room.”

Nick runs into June soon after and rebuffs her insistence that he has to deflower his wife; she’s 15, he points out. “Oh, you have to f—k somebody you don’t want to?” she snarks at him. “Poor thing.” She points out that Eden thinks that Nick might be a gender traitor — why else wouldn’t he want to shtup her? — and that he’s gotta sleep with his wife ASAP because June can’t deal with life if he gets strung up on the wall. “I love you,” he says. “She’s your wife,” June answers before retreating to her room and sobbing.

That night, Nick and his new bride have sex for the first time. There’s a sheet with a strategically placed hole between them. She grips his arm the entire time as though she’s in pain, which she probably is. When he asks her if she’s OK afterward, she says yes. “I can’t wait to see if it worked,” she adds, so eager to please that it is painful to watch. “If not, we’ll just keep trying.” 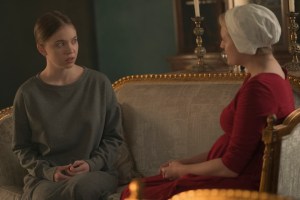 MANY STRINGS ATTACHED | Fred finds Serena angrily flower-arranging in the greenhouse behind their home, where tells him about June’s request. And the next thing you know, Fred is sneaking into June’s room while she sleeps. “I have something for you,” he says, producing a Polaroid of Hannah in her pink Subservient-in-Training uniform. June thanks him and cries as she stars at the photo, which the commander takes as an invitation to start pawing at her belly, then her breast. “Feels different. I like it,” he says, telling her he missed her. She responds in kind, because what the hell else is she going to do? He kisses her, maneuvering them so they’re splayed on her bed. “I want you,” he whispers, but a very smart June notes that sex probably wouldn’t be great for the baby. This is, of course, probably not true — I’m not well versed in aftercare for subchorionic hematomas, and I hope never to be — but because Fred is as dense about women’s anatomy as most people who hold his views are, he backs off quickly. He leaves the photo with her; she weeps.

The next morning, Serena tries to humiliate June by having Eden toss a knitting needle on the floor, then ordering the handmaid to pick it up. “I felt a cramp, so, don’t want to hurt the baby,” June says, leaving without so much as microbending her knees. Up in her room, she cradles the picture of Hannah in her hands.

BOOM GOES THE DYNAMITE | Meanwhile, Fred is overseeing the opening of the new Rachel and Leah Center, which will be used to process handmaids and do a lot of other really messed up stuff (probably). Commanders from all of the districts are there; when Nick sees Commander Price, he begs for reassignment and flat-out says there’s a lot he hasn’t divulged about Fred. “Promise me you’ll protect the handmaid,” Nick asks. “You have my word,” the older man replies.

The new center looks like the very university building where Serena was shot. As Fred addresses the men who’ve gathered, a whole bunch of handmaids stand along the auditorium’s back wall. But then NuOfglen steps out of line and turns to face her fellow ‘maids, raising one hand so everyone can see that she’s holding a detonator. The women start to run.

NuOfglen then walks into the assembly, and an irritated Fred — who’s speaking on stage — says it’s not time for the handmaids to do whatever they’re supposed to do. NuOfglen holds up her hand once more, and we can see that she’s pressed the buttom. And as the red-clad women run for safety, a huge explosion rocks the center.

Ready for the next episode? Read The Handmaids’s Tale Season 2, Episode 7 recap here!