If I had to grade NuOfglen’s big boom, based on what we learn in this week’s episode of The Handmaid’s Tale, I’d give it an A for effort, and a C for execution… of the execution.

Because while the highly disgruntled handmaid’s decision to detonate a bomb at a gathering of Gilead higher-ups might’ve been intended to take out as many members of the patriarchy as possible, women like herself made up more of the fatalities — as the starkly beautiful scenes at the cemetery at the top of the hour make clear.

But who knew that the incident would create a power vacuum that one of Gilead’s most weaselly commanders would jump to fill? And that that would in turn cause Serena, June and Nick to form an unholy — yet very attractive — alliance? And that EMILY WOULD BE RESCUED FROM THE COLONIES?!

Ahem. Read on for the highlights of “After.” 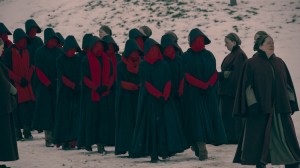 A GRAVE MISTAKE | As Iris Dement’s “My Life” plays on the soundtrack, a procession of handmaids files into a snowy cemetery, led by a drummer. All of the ‘maids faces are covered with a red cloth; they’re wearing black capes and black bonnets as they file by Aunt Lydia, who stands in a circle of coffins and tearfully leads the women in a responsive prayer. There’s some ritualistic kissing of the coffins after the grief-stricken ladies all remove their face coverings, and Lydia cries as she laments that she wishes she could give her girls a “world without pain and violence.” Which is really touching and all… until you remember that Aunt Lydia is instrumental in making sure the handmaids’ world is rife with pain and violence.

In the van afterward, the handmaids quietly debrief. There are 26 rumored dead among the commanders; 31 handmaids died in the blast. As they drive through the streets, one of the handmaids notes that it looks like the Eyes have been active in trying to root out anti-Gilead sentiment: There are corpses hung from nearly every home and tree. 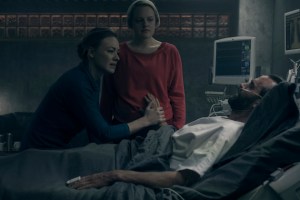 MEET THE NEW BOSS | Commander Waterford survived the attack, but he’s only partly lucid as he rests in a hospital bed with Serena and Nick looking on. Commander Cushing and Commander Putnam show up with news: Commander Pryce died in the blast, and Cushing is the new head of security. In the corner of the room, Nick tries to arrange his facial features into an expression that doesn’t radiate “Oh crap.” Cushing promises Fred, who’s barely able to stay awake, that he won’t stop until he finds everyone responsible for the attack.

Far away, in The Colonies, it seems like Cushing’s plan is already playing out. Black SUVs roll up to where the workers are being marched out to the fields. A list is consulted, and then several women — including Janine and Emily — are manhandled into the vehicles without explanation. 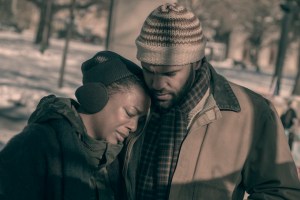 MOIRA’S STORY | In Canada, Moira and Luke are among the throng of people waiting to hear whether their loved ones were hurt in the bombing. A sympathetic official says that information is spotty, but they have confirmation that some handmaids died. Moira wants to wait around until they know one way or the other whether June was one of the casualties. But Luke is much more chill about the whole thing; though he knows June isn’t OK, “I have faith she’s alive,” he tells her, going home to procure dinner.

But Moira decides to stay, talking her way into a back room where there are binders full of unidentified dead people. And as she flips through them, we learn — via flashback — that she once served as a surrogate for a family wanting a child and that during the process, she met a doctor who’d later become her girlfriend and then fiancée. The woman’s name was Odette, and when Luke returns to bring his roommate some dinner, he reminds Moira that her lady wouldn’t want her to torture herself this way. “It’s time,” she tells him. “I just want to know if she was alone when she died.”

Sadly, the answer seems to be yes. In one of the binders, Moira finds a photo of Odette, laid out on the ground and very dead. She shakes and starts to cry. Later, as Moira lays a framed photo of her and Odette at the memorial outside the refugee center, she cries again. Luke holds her hand. (Side note: While I loved learning more about Moira’s backstory, it felt a little crammed into this episode, right? Correct me if I’m wrong, but had Odette’s name ever been mentioned before in the series?)

IN WHICH SERENA DOES A GOOD, IF SHADY, THING | Back in Gilead, Cushing comes to talk to June and refuses to believe that a) she didn’t know much about her shopping partner, NuOfglen, and b) she has no idea who was helping her while she was in hiding. She reminds him of the official Waterford party line — that she was kidnapped against her will — but it’s clear he doesn’t believe her. He vaguely threatens her as he vows to find out whether her house has “been infected by terrorists.”

His interrogation is interrupted by barking dogs and sirens outside. Guardians have two marthas at gunpoint in the street, and when one reaches for her pass, the armed man shoots her dead. It rattles June hard, and when she later runs into Nick outside Fred’s hospital room, she has a quiet, tearful freakout. Nick hugs her and assures her it’s OK, which helps her pull herself together enough to tell him about Cushing’s interrogation. Nick once more vows to keep her safe, and they wind up doing some hot-n-heavy kissing right there behind a see-through partition. Um, lovebirds? I NEED YOU TO REMEMBER THAT YOU WILL PROBABLY BOTH BE KILLED ANY DAY NOW SO PLEASE STOP TEMPTING FATE BECAUSE MY HEART CAN’T TAKE IT.

Later that night, at home, Serena grumbles that the martial-law-happy Cushing “will be the death of us all.” But she doesn’t really seem to take it seriously until June mentions Cushing’s visit and reminds her mistress that “They executed Commander Deeds and his whole household for what Ofglen did,” and that the same thing is likely to happen to any home even tangentially connected to the underground. “Fred would never allow that,” Mrs. Waterford maintains. “He isn’t here, Serena,” June reminds her. 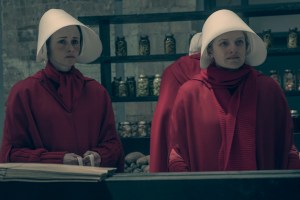 PLEASED TO MEET YOU | And that’s when Serena starts getting crafty. With Nick’s help, she forges Fred’s signatures on some warrants to the Consular of Divine Law. The result? Cushing is stripped of his command and charged with apostasy and treason, then hauled away by some eager guardians.

But that’s not even the best thing that happens! In the market soon after, Janine runs over to June, who’s very happy to see her but can’t fathom how she came to be there. Apparently, because so many handmaids were lost in the bombing, Gilead yanked a few back from The Colonies. “God saved us. He has a plan. He has a plan for both of us,” she chirps, and before June can ask what Janine means, she sees a very overcome Emily standing a few feet away.

“June. That’s my name,” June says right away to her former shopping partner. “I never got the chance to tell you.” And then perhaps spurred by the earlier realization that no one knew NuOfglen’s real name (it was Lillie), June quietly introduces herself to another handmaid nearby. “I’m Brianna,” the woman says hesitantly. But the sureptitious introductions continue throughout the market, and it’s beautiful… until you realize that Nick’s wife, Eden, is clocking the whole situation with a great deal of interest.

At home that night, Serena beckons for June to join her in Fred’s study. She’s drafted new security orders in Fred’s name; she wants a de-escalation of the martial law Cushing instituted. “It’s about time things started getting back to normal around here, don’t you think?” she asks, then wonders if June — a former editor — would be willing to give the orders a once-over. June hesitates, because you’ll remember that women aren’t supposed to read anything in this horrifying new world order, but then looks up with great interest.

Ready for the next episode? Read The Handmaid’s Tale Season 2, Episode 8 recap here!