Need to catch up? Check out the previous The Handmaid’s Tale recap.

While the Commander cat’s away, the sexually enslaved and stripped-of-their-human-rights mice will play, amirite?

Fred’s continued absence from the house creates unlikely alliances in this week’s Handmaid’s Tale, as Serena grows bolder in her Gilead policy ghostwriting and June is all too happy to help her. But once the man of the house returns, things get icky quickly. Warning: If you haven’t felt any sympathy for Serena up to this point in the series, you may after watching this episode.

In other news, Janine’s baby isn’t doing well, and Serena takes surprising steps to help the little girl — patriarchy be damned. Read on for the highlights of “Women’s Work.” 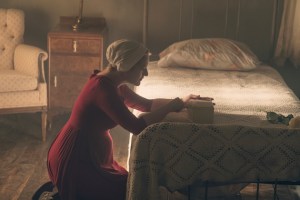 DYNAMIC DUO | When we rejoin Mrs. Waterford and her handmaid, they’re kicking back in Fred’s study, listening to Motown records and writing/editing their little hearts out. “She writes, I read. This is the new normal, and an offense to God,” June voiceovers, noting that her mistress “looks pretty f–king happy” about breaking so-called divine law.

The two women are kinda getting along — Serena even admits that she hates knitting — but then Mrs. Waterford informs June that Fred will be home the next day. June offers up the flattest possible “Praise be” in response. And when the Commander does return, limping and using a cane, he quickly ushers his wife from his office. Upstairs, June finds a music box and a rose on her bed. “It was nice working with you, too,” she says via voiceover. 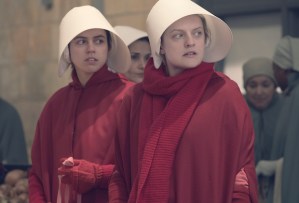 BABY IN TROUBLE! | While at the market, June and the other handmaids hear a siren and instantly drop to their knees to pray: It’s the baby ambulance, and thanks to Serena sharing some information, June knows it’s headed to see the Putnams — aka Janine’s old commander and his wife, aka the ones raising her child, aka Janine’s daughter is in trouble.

Janine, naturally, freaks. But June promises to find out what’s going on and report back, which calms her a bit. Turns out no one knows what’s up with the kid, who is lethargic and won’t stop vomiting — and there’s a world-class neonatologist in Gilead, but she’s a woman and therefore no longer allowed to practice. Enter, Serena’s crusading pen!

Mrs. Waterford fakes a directive from her husband, giving the neonatologist (who is now a Martha) a pass to the hospital, where she is given a one-day reprieve. (Side note: Real talk? Watching the doctor cry as she puts her scrubs and coat on after so long in servitude nearly did me in.) Sadly, the physician can’t find any earthly reason why little Angela (whom Janine calls Charlotte) is ill. So Naomi and Warren Putnam, as well as Aunt Lydia, who always seems to be around all the time, settle in for the heartbreaking wait for the baby to die.

MAMA KNOWS BEST | In the meantime, June asks Serena to intercede on Janine’s behalf, so she can see her daughter one last time before she goes. “Don’t be stupid,” Serena answers… but then, indeed, makes the mother’s visit happen. And when it’s decided that nothing more can be done for Angela/Charlotte, Janine is even allowed to hold her baby.

So the handmaid removes her mask and gloves and nuzzles the child with so much love and joy that it hurts to watch them, knowing the eventual outcome. It’s probably more unadulterated caring than the kid has gotten her entire short life, if the stinkface that Naomi sports all the damn time is any indication, and it made me cry when I watched it.

In the morning, though, a miracle: When Aunt Lydia wakes from where she’s fallen asleep in a chair, she finds Janine and her daughter, both stripped to their undies, both happily cooing to each other by the window. Seems like Angela/Charlotte has made a full recovery! Also: OH THANK GOD. I can’t handle Dead Baby Grief on top of all the other flavors of grief this show bestows on a weekly basis.

Side note: Naomi was totally poisoning that child, wasn’t she? Discuss. 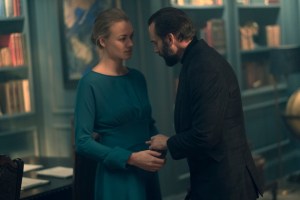 THE BIBLE BELT | But let’s back up a second. When Serena and June return from the hospital after leaving the Putnams and Janine the evening before the child’s upswing, they share a warm goodnight that is interrupted by Fred ordering them to his office. He knows Serena has been forging his name on documents, and he slowly realizes that June has been helping her. “I did it for the child. What greater responsibility is there in Gilead?” Serena asks. “Obeying your husband,” he answers gravely.

Then it’s not long before he’s quoting Scripture and loosening his belt, which he removes and uses to whip his wife while June is forced to watch. Alone in her room later that night, Serena sobs into her hand as she gets undressed, the welts from Fred’s belt angry and red across her tush. “Can I do anything for you, Serena?” June asks gently from the other side of the door, but gets ordered back to her room for her troubles. Instead, she swings by the Commander’s office to apologize and bat her eyes. Does it work? We’ll see.

LETTER BE | Over in Nick’s apartment, Eden finds the pile of illicit letters from handmaids while she’s organizing his stuff. She claims she didn’t read them — but what else is she going to say? “You never touch my things, you understand me?” he says menacingly. Guys, between her gender-traitor comment a few weeks ago and this, I’m worried.

Ready for the next episode? Read The Handmaid’s Tale Season 2, Episode 9 recap here!