How fitting that Serena spends the beginning of this week’s The Handmaid’s Tale in her greenhouse. Because the seeds of discontent sown when Fred whipped her in front of June? They are growing.

And nowhere is that more apparent than on the Waterfords’ diplomatic trip to Canada, which begins with angry protesters and ends with… well, more angry protesters. But the Commander and his wife also get tossed out of the country on their holier-than-thou tushes, which is rather satisfying.

Read on for the highlights of “Smart Power.” 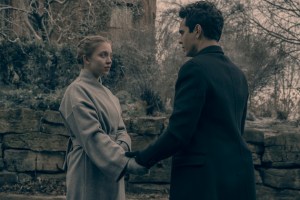 HERE’S YOUR NURSING BRA, WHAT’S YOUR HURRY? | Fred summons Rita and June to let them know he and Serena are headed north, but that Isaac — a guardian — will be around to watch over the house “and the baby” while the Waterfords are gone. For the record, Serena really doesn’t want to accompany her husband: June is in her third trimester, and then there’s the whole beating thing from last episode. But he counters that the trip is for the baby and its future, and that she’s a “crucial part” of showing the world that Gilead’s women aren’t oppressed or voiceless. And the fact that he says that with no hint of irony whatsoever is chilling.

As Eden is giving an icily distant Nick cookies and telling him she’ll miss him, Serena makes sure to say goodbye to the baby. Like, she literally does that thing where she ignores June’s torso and head and talks directly to her abdomen. Oy. Then, almost as an afterthought, Mrs. Waterford says, “You’ll be leaving the house as soon as the baby is born.” June looks like she’s been slapped. “No, handmaids stay until the baby is weaned,” she reminds her mistress. “I think we’ve all had more than enough of one another, don’t you?” Serena asks, and all a stricken June can do is agree.

CANADIAN FAKIN’ | In Canada, Moira, Luke and Erin watch the Gilead delegation’s arrival on TV. Upon seeing Fred’s face, Moira has a small, understandable freakout. “That’s Waterford,” she says, recognizing him from Jezebels. Later, Rachel at the embassy agrees that the Commander is war criminal but disappoints both Luke and Moira by saying that her hands are tied: Technically, the entire Little America group/embassy is a guest of Canada’s, and she has now power to tell the Canadian government to arrest him.

On the drive from the airport to the hotel, Serena longingly gazes upon the life she can’t have: Women working, couples engaged in PDAs, all that good stuff. She and Fred are greeted at the hotel by an official delegation, including the deputy minister for immigration who points out that he was fond of visiting the States “with my husband” and that they’ll only return “when we feel welcome.” Then the men break off for official business, with Serena left with a female handler who provides her with her schedule of cultural activities, which is in PICTURES like she’s a PRESCHOOLER because Gilead is the worst.

JUNE PLANS FOR THE FUTURE | Back at home, June is stewing about Serena’s dictate. Janine gets mad when she hears, which causes Isaac to tell her to hush up. “Suck my d—k,” she replies (Side note: I love this girl), which earns her a beat-down from the guardian. This series of events seems to solidify something in June, who gets Rita alone to ask her to watch out for her child after the handmaid is jettisoned from the Waterfords’ life. “I want my baby to know kindness. I need her to have someone kind in her life,” she tells the rita, who cries a little as she accepts: “I’ll do what I can.”

Later, during a check-up, June asks Aunt Lydia the same favor, because “in my experience, any man who would hurt a woman would hurt a child” and the baby will need “protection” as it grows up in the household. Lydia vows never to let anything bad happen to any baby, which is something, I guess? June seems OK with it, so yay.

SERENA CONSIDERS AN OUT | While Fred is going about his business, there’s not much for Serena to do. And after she gets an extremely cold shoulder from another female guest at the hotel, she heads to the establishment’s bar for a glass of wine. That’s where she meets Mark, a handsome guy who charms his way into sitting with her… then reveals that he’s a representative of the actual American government and offers to give her a new life. “Mrs. Waterford, we could have you on a plane to Honolulu in an hour,” he says, which a) WOW that’s an attractive offer, and b) PRAISE BE that Hawaii isn’t caught up in this horribleness.

She’s dismissive but doesn’t order him to leave, so he continues his pitch. Gilead blames infertility on women, he notes, but most scientists think the main problem is with the men. Translation: She could have a new life and maybe her own kid. “I have a child on the way,” she counters. “That’s not your child,” he replies — and that gets him tossed from the table, with her insisting that she’d never betray her country. “I thought you already did,” he answers, leaving his cigarettes and matchbox behind as he departs. Though Serena is unsettled, she pockets the ciggies and matches. 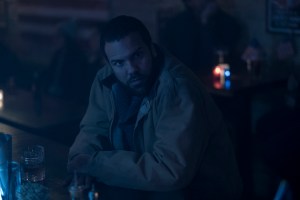 FRED, MEET LUKE | During a protest outside the Waterfords’ hotel that night, Luke charges Fred as he gets out of his limo. Though cops hold Luke back, he’s close enough for the Commander to hear him when he yells that he’s June’s husband, and “You rape my wife!” Yowza. Also: TRUE. Luke keeps at Fred, telling him to remember his face, because he won’t forget his. Fred is all, “Fake news. No truth to that. You’re a heathen. Blah blah blah,” and he is so smug about the whole thing that I want to take the sign Luke is holding and stick it where the Good Shepherd’s countenance will never shine upon it. Nick and Serena watch the whole exchange with a great deal of interest; upstairs, Fred tells his wife to forget about Luke: “It was unpleasant, but we soldier on.”

Nick finds Luke drinking in a bar and introduces himself as “June’s friend,” then delivers the news that the handmaid is pregnant with what everyone believes to be Waterford’s kid. Luke cries and then halfheartedly tries to beat Nick up, but stops to ask about Hannah. Nick’s got no intel on the girl, but he does pass along the packet of letters that June was hiding and that Eden found a while back. Luke then asks Nick to relay the message that he loves her, that Moira made it out and is living with him, and that he won’t stop fighting for her.

At home, Moira, Erin and Luke read the letters. Moira is mad that the package June had been talking about wasn’t actual explosives, but Erin points out that the bundle of letters can have even more impact. So they anonymously (I suspect) upload them to a server, the press catches wind of it, and the Waterfords are unceremoniously kicked out Canada the next morning. It is immensely satisfying to watch, especially when Fred sputters that the allegations made are near-impossible to verify. “We believe the women,” the Canadian diplomat says starkly.

“I don’t know how you live with yourself. It’s sad what they’ve done to you,” a female diplomat says to Serena. Girl, preaching to the disenfranchised choir! Serena, flummoxed, just says, “Go in grace.” Then the motorcade is engulfed by protesters at the airport; Moira manages to get right up outside Serena’s window with a sign that says, “My name is Moira,” and Fred certainly notices her. That night, she cries as the protesters gather at her apartment, singing “America the Beautiful” after learning that the Gilead delegation officially has left Canadian airspace. 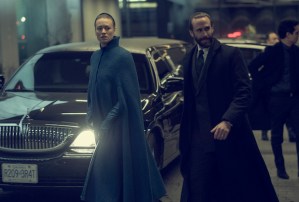 AFTER-ACTION REPORT | The Waterfords and Nick make a muted return late that night. “We’re lucky in a lot of ways, aren’t we?” Fred asks Serena before they retire to bed, and she replies that they are — then she privately hucks the matchbox, which we see is from a Hawaiian tiki bar, into the blazing fireplace in her room.

Meanwhile, Nick goes to June’s room to relay everything about meeting Luke, including Moira’s freedom and the letters’ release. “That you for telling me that,” she says, smiling through her tears. “I love you,” he says, kissing her right before he leaves.

After he leaves, June voiceovers that Moira is Hannah’s godmother, and she got out of Gilead. “It was impossible, and she did it,” she says, newly re-fired up. “I know I should accept the reality of you being born here, make my peace,” she tells her child. “But f—k that.”

Ready for the next episode? Read The Handmaid’s Tale Season 2, Episode 10 recap here!