If that soul-crushing farewell in this week’s The Handmaid’s Tale rang true, thank series line producer/writer Yahlin Chang, who tried to imagine herself in June’s unenviable position.

“I have three kids. They’re 12, 9 and 7,” she tells TVLine. “Writing that scene, I really had to envision, particularly my 9-year-old, because he was closest in age at that time to Hannah. I kept being like, ‘What would Hal say? What would Hal do if if he had been kidnapped, and we were apart for three years, and then he came back?'”

It’s a fraught scenario for sure. And, true to the dystopian drama’s nature, the reunion is just one of several huge, emotional levelling plot developments that take place in the hour.

We chatted with Chang, who also wrote this season’s Episode 4/”Other Women,” about the biggies. But first, a quick recap: 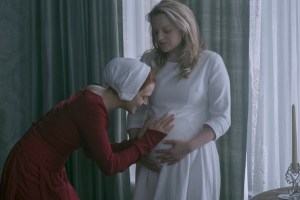 June went into labor at the market, which sent everyone into Babypalooza frenzy. The handmaids and wives gathered at the Waterfords’ home… only for Aunt Lydia to diagnose false labor. Irked that the doctor wouldn’t induce the handmaid, Serena and Fred forced her to submit to The Ceremony in the hopes that sex would trigger contractions. June fought them, hard, but it happened anyway.

The next day, Fred put a nearly catatonic June in a car and had Nick drive her to a home in the woods, where she was allowed to visit with Hannah for just a few minutes. The girl was wary of her mother but warmed up, eventually asking if they’d see each other again. June tearfully said she’d try to make it happen. Then the girl was made to leave, just before some Gilead thugs showed up, shot Nick, stuffed him in a car, then drove away. That left a freaked-out and hugely pregnant June alone in a house in the middle of nowhere as the credits began to roll.

Read on for a scribe’s-eye view of “The Last Ceremony.”

TVLINE | The viewers have been waiting for June to see Hannah again. Talk to me about how you approached such a big scene. Did you feel a pressure to get it right?
I did a ton of research, particularly for that scene, because I wanted it to be the most realistic and specific scene. So I talked to a ton of social workers and psychologists, and people at the [United Nations], and experts in this. Amazingly, they all sort of said the same thing about what would happen in the scene.

What I didn’t know before I started doing all the research — I mean, I sort of knew it, but it was confirmed to me — [was] that these scenes play out all the time, and this was, of course, before all this crazy sh-t was going on at the border with tearing mothers and children apart. But unfortunately, this happens all the time that mothers and children are separated. 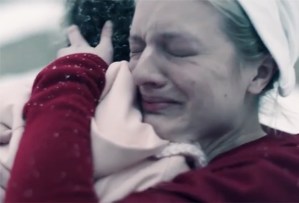 The UN person was telling me about things that she’s observed or documented when children and their parents are separated at wartime, and the parents are going to be taken out to be executed. They have to say their final goodbye to their child, and one of the things she told me was they try to cram in a ton of advice in their last few minutes. And they try to leave the scene smiling with a happy face, because that’s the last thing that their kid will remember of them. They also said that it never goes the way the moms think that they will go… It never goes well. All the child psychologists I had spoke to said that Hannah would be incredibly overwhelmed, and so that she would run away, which she does in that scene. Her mother grabs her and then she runs away. And then Offred immediately goes into mom mode and is trying to take care of her… While she does feel rejected, her No. 1 concern is for Hannah’s well-being at that moment.

It’s kind of a monster of a scene, because it has like three distinct parts there that are coming together for the first time… The first is this whole hello scene, and then when the guardian says we have to go, the second scene in the hallway is sort of like a goodbye. “Here’s all the advice, enjoy your life.” And then when Hannah leaves, Offred can hear her. I mean, I was always the mom that could not do a clean preschool drop off. My kids would be like “No, Mommy don’t go!” And you know how you’re supposed to leave, like hug and leave right away… and all the teachers tell you they’re fine as soon as you leave? Once I heard them crying, I could not stop myself from going back in. [Laughs] It would be unbearable for Offred, so she has to go out [after Hannah]. That very last scene outside is just her building a bridge for Hannah. I was thinking, as a mom, what do you do? Well, you can give concrete steps. So like, “Take your martha’s hand, get in the car.”

Lizzy [Moss] and Bruce [Miller, showrunner] and I were talking about that particular section. Lizzy was reading it, and she goes, “I feel like you need three sentences there. Like, ‘Take your martha’s hand, get in the car…” and then Bruce, who’s a genius, said, “Oh, you know what she’s going to say there, don’t you?” I’m looking at Lizzy, and I’m like, “What?” And Lizzy goes, “And you’re going to go home.” 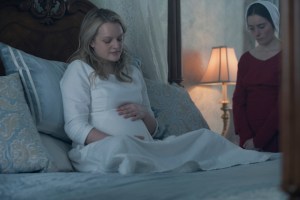 TVLINE | The handmaids in this show are ritually raped on a regular basis, yet I was ashamed when I realized how normalized it had become to watch The Ceremony — and I only realized that because of how much more disturbing it was when June fought back instead of going limp. At the same time, the show has had some criticism for showing too much of the violence against Gilead’s women. The Ceremony in this episode is brutal; talk to me about why we see it play out from start to finish.
I hear that concern. God, there are two things. One is that I felt like that is what would happen. What guides us in creating stories is being true to these characters and true to the situation that they find themselves in, and what would actually happen… The whole system that Gilead is built on is systematic rape and on the idea that the handmaid’s body does not belong to her, it belongs to the wife and the commander. It’s their body, so if they want to get the baby out sooner, they can do whatever they want to get the baby out sooner. I absolutely believe that they would. Why wouldn’t they do that?

What’s brilliant about how Yvonne [Strahovski] and Joe [Fiennes] played the scene is that they didn’t expect Offred to fight back, because handmaids aren’t supposed to fight back… She usually successfully disassociates like all the handmaids do, and she has not done that… Gilead has so successfully normalized rape, but rape is not normal and it’s never normal. It’s always horrible, so even though you see scenes of The Ceremony where the handmaids have disassociated and all seems calm and placid, what’s going on in these girls’ mind is what happens in this scene. It’s that terrible every single time for those women. So I do feel like it’s not gratuitous at all. It’s actually, in some ways, the most honest depiction… Because it’s that horrible. Rape is just horrible, and that’s what those handmaids are going through every single month. It’s that brutal a process. There is this sort of, like, what did you think was happening in every Ceremony?

TVLINE | It’s interesting to me that June calls out to Serena, not Fred, to stop it.
They weren’t expecting Offred to fight back, and it shocks them… The place that they’re in is that Serena can’t stop it because if she stops it, it would be like admitting that all of the ceremonies were rape, and there would be such cognitive dissonance, it would explode everything.

Ready for the next episode? Read The Handmaid’s Tale Season 2, Episode 11 recap here!