You can take her civil rights. You can take her ability to work… or read… or wear pants, for the love of Gloria Steinem. But take away Serena Joy’s chances at raising a child of her own, and you’ve gone a sanctimonious bridge too far.

It’s a lesson Fred learns all too well in this week’s Handmaid’s Tale, which finds the Waterfords going for each other’s throats as they freak about June’s absence. In their anger and fear, the pair lets loose on each other, with thoughts and accusations that have been simmering for episodes (years?) bubbling over into a toxic boil.

I’d probably lose an appendage in Gilead for saying this, but we’re not there (yet): It’s incredibly entertaining to watch.

Also of rather important note? June has her baby. Alone. While a wolf literally is at the door. And even though I should be used to it after almost two seasons of this show, I’m in awe of the handmaid’s resiliency. (And did I mention that Oprah swings by, too?)

Read on for the highlights of “Holly.”

HOPE-RAH | We open right where the previous episode left off, with June alone and crying in front of the remote estate where she was allowed a brief visit with Hannah. At first I worry that she’s locked herself out of the house, but it’s just the garage door that’s locked; as she peers through the window, we see there’s a car there under a tarp. Also in close proximity: a wolf, which has come out of the woods and is looking at June like she’s a Beggin’ Strip dipped in peanut butter.

She makes it back into the house, realizes the electricity is turned off, and starts rifling through drawers and cabinets, looking for keys. In the study, she sees a photo of Hannah with her new mom and a drawing, ostensibly made by the girl, in a frame on the desk. The property is owned by Hannah’s new family, the McKenzies, it seems. After a flashback about how difficult it was for June to leave her daughter on her first day of preschool, June locates the keys and returns to the garage.

The car works when she turns the key in the ignition, and the radio is picking up a pirate radio station broadcasting from somewhere in Canada. The DJ’s news report drops a few more clues about the world outside Gilead: The American government is alive and well in Anchorage, the same way it is in Hawaii; India, China and the United Kingdom are working against Gilead; and a Bruce Springsteen tune is still able to galvanize a broken spirit — well, at least, that’s what I’m inferring from the selection of “Hungry Heart” as the next song on the playlist. (The broadcaster, by the way, is none other than Oprah Winfrey herself. Find out how the voice cameo came about here.) 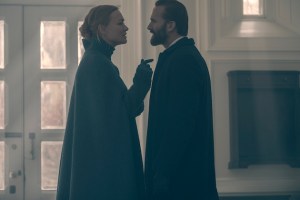 NO MORE MRS. NICE COMMANDER | Hearing a brief snippet of reassurance from the resistance gives June the push to make a run for it. She hurries around the house, collecting food, water and supplies, then goes upstairs and procures a man’s overcoat to put over her gown. But then she hears a car speeding up the driveway, and moments later, a frantic Serena and Fred are in the foyer. June starts to cry. Right there with ya, girl.

The Waterfords are spun out that both Nick and June are missing, and Fred wants to go home and make a plan. “I’m not leaving here without my baby,” Serena vows, tromping upstairs, where she finds June’s discarded cap and cloak in a bedroom. (June, like any hunted creature, has clambered to higher ground and is trying desperately to hold it together up in the attic.)

Serena descends in a fury, disbelieving her husband’s assurances that Nick “wouldn’t be disloyal.” She wheels on him. “They hate you. She’s always hated you. She keeps running away from you,” she spits. When he counters that June’s attitude might be different if Serena had ever shown her kindness, she’s incredulous. “Kindness?! You raped her yesterday.” Damnnnn, Serena. Also: TRUTH, SERENA.

That observation severs whatever thin strand of civility is holding them back from going nuclear on each other. F-bombs are dropped. He wonders, “When did you become such a bitch?” They argue about how they can’t report June and Nick’s disappearance, because Gilead officials will think they’re part of the resistance. 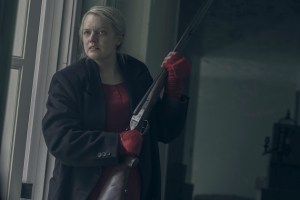 “I gave up everything for you, and for the cause. And I only ever wanted one thing in return: I wanted a baby,” she says sadly. But angry. Still angry. Never not angry. They get up in each other’s faces, Fred grabs her and pushes her up against a wall. It’s one of those fights you can’t look away from. And upstairs, June seems to concur: She’s holding a shotgun she found in a trunk, and it’s trained squarely on her captors.

“I have nothing,” Serena cries. “I will never hold my baby.” And when Fred mistakenly tries to comfort her, she pushes him away. As they move apart, June realizes that she’s missed her shot. And as the Waterfords exit the house, June shakes on the top floor.

CAR TROUBLE | But once she regroups, she grabs the gun and more bullets and continues preparing to leave. Of course, that’s when she starts to go into labor. FJL, am I right? Still, the badass mother-to-very-soon-be soldiers on with an escape plan that now involves trying to figure out a way to get the car out of the garage without the aid of the electric door opener. And because not one moment of existence in Gilead isn’t terrible, she can’t even physically manhandle the door open, because it’s frozen in place with snow. As a last-ditch effort, she tries driving the car right through the door, like in the movies. But it doesn’t work, and when she slips in the driveway and falls on her back, she realizes something else: Her water has broken.

The universe apparently doesn’t think this is enough of a challenge, though, because oh look — the wolf is back? It literally licks its lips while watching June stagger to her feet, clutching her belly, and then the beast howls. Oh you stupid, shaggy fleabag, you are, like, ninth on the list of Things That May Kill June Today. Go drink out of a toilet or something.

Realizing that she’s going to need help, and soon, June retrieves the gun, walks into the front yard and shoots four bullets into the sky. “Here I am,” she voiceovers. “Come and get me.” 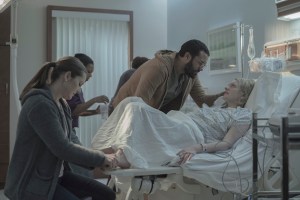 HOLLY, IT’S YOUR BIRTHDAY | Back inside, June gets a blaze going in the fireplace and then labors in front of it, naked. She has flashbacks to Hannah’s birth — which was attended by Luke, Moira and June’s mom, Holly — as well as to birthing training at the Red Center and Janine’s labor last season. (You remember, all of that “Breathe, breathe, breathe and push, push, push” stuff?) Elisabeth Moss is really going for it here, and her grunts and moans turn into a primal yell at the end. Then all of a sudden, the baby is born, and it’s crying and seems healthy and PRAISE BE AM I RELIEVED. She lays down with the infant, which quiets as she cuddles it near and covers them both with a blanket. “Holly. Your name is Holly,” June whispers to her daughter. “And you have a big sister. Her name is Hannah. And one day, you’re gonna meet her.”

As June’s voiceover continues, we learn to whom she’s been speaking in these voiceovers throughout the course of the series: It’s Holly. “I keep going with this limping and mutilated story because I want you to hear it, as I will hear yours, too, if I ever get the chance,” she says. “If I meet you or if you escape, in the future, or in Heaven. By telling you anything at all, I’m believing in you. I believe you into being. Because I’m telling you this story, I will your existence. I tell, therefore you are.”

Just then, there’s the noise of cars pulling up outside. “We did it, Holly,” June says

Ready for the next episode? Read The Handmaid’s Tale Season 2, Episode 12 recap here!