I think we can safely say that many Handmaid’s Tale viewers feared Eden’s involvement in Nick’s life was going to end in someone’s death. But I sure didn’t think it would be hers.

This week’s episode proves me wrong, as the seemingly timid child bride proves herself a warrior for love. She refuses to deny her relationship with Isaac, the guardian stationed at the Waterfords’ home. She valiantly stands before Gilead’s Terrible Old White Men and accepts her sentencing. And then she dies, never once backing down from her beliefs.

It’s inspiring, albeit in a completely awful way.

Meanwhile, the show finds a way to get June back in the same house with her baby, whose name is officially Nichole (but just to stick it to the man, I’m going to keep referring to her as Holly, cool?).

Read on for the highlights of “Postpartum.” 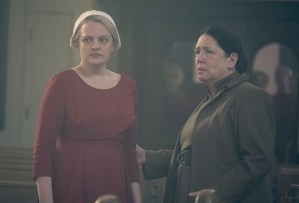 LA LECHE BELEAGUERED | As the episode opens, Serena is all blissed out as she bathes baby Nichole Holly in the nursery. My first thought: That baby looks REALLY young. It’s still all peely and everything! Meanwhile, June sits, hooked up to a double pump at the Red Center. She’s holding the apparatus to both breasts; couldn’t those monsters have done one decent thing and given her one of those bras so she could go hands-free?

It’s been a few weeks since Holly’s birth, Aunt Lydia exposits as she enters, and wasn’t it a blessing that the neighbors found June and the baby in time? Apparently, June is now in demand as a handmaid; one Commander and his wife even sent over a basket of baked goods to woo whoever will assign her. “Take one, dear. I think you’ve earned it,” Lydia coos. “I think I’ve earned a whole cake,” June deadpans. Still, she takes one of the treats.

The most pressing problem: June isn’t producing much milk, which is troubling and all but I’m having a hard time focusing on that right now because…

PRAISE BE! | … NICK IS ALIVE. We learn this as he helps Fred decorate his new office. Waterford is running point on “media expansion” now — whatever that means — and he clucks about how his favorite Guardian had a “misunderstanding” with “overzealous guards.” It’s hard to tell what Fred does and doesn’t actually believe: One moment he’s praising Nick for handling the botched Hannah meet-up with discretion and noting now “we always look out for each other, don’t we?” and the next, he’s forcing Nick to admire the new family Waterford portrait — with Nick’s offspring front and center — that’s hung right behind the desk. 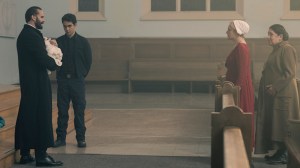 BABY BLUES | OK, back to poor June’s underperforming udders. Fred and Nick collude with Aunt Lydia to have June see the baby, but when the men arrive at the Red Center with the infant in tow, June can’t bear to be near her daughter. “Seeing her might prime the pump, so to speak,” Lydia tells her, and June hasn’t had a say in anything that’s happened to her or her body so far, so why start now?

Being in proximity to Holly causes June’s milk to let down painfully; it wets the front of her dress, and before June can even react, Fred is like, “Great! Put that in a to-go cup and we’ll take it!” Dude, it’s not a Box O’ Joe. Relax. June tremulously asks to nurse the baby, and for once, Aunt Lydia is on board. “Consider what’s best for your daughter,” she advises the Commander. Next thing we know, June is back at the Waterfords’ house. “She has no contact with the baby, and she pumps in her room,” Serena decrees, furious at the decision her husband has made.

WELCOME BACK | So that’s what happens, leaving June to lie on the floor and caress the hardwood when she hears her daughter crying in the nursery below. One evening, as she deposits full bottles in the refrigerator, she runs into Eden. Nick’s young wife asks a few questions about how breastfeeding feels, then gets DEEP: “What if you had that chance, for love and a baby?” she wonders. Maybe because it’s late, maybe because of hormones, maybe because when you’re nursing it can seem like it’s you and your chewed-on/sucked-dry parts against the world — who knows why June feels a new softness toward Eden? But she does, telling her gently, “I think, in this place, you grab love wherever you can find it.”

And while that advice will prove very problematic in a few scenes, for now let’s just focus on the way Nick gushes over Holly when he and June steal a few moments in the foyer. “Our baby’s so beautiful,” he says, and AW NICK I AM BARELY OVER THE FACT THAT YOU ARE ACTUALLY NOT DEAD AND YOU START SAYING THINGS LIKE THIS?! “I wish I could hold her,” he adds, then they start talking about how they should run away and start a new life in Maui and now I’m dead from TOO MANY FEELINGS. 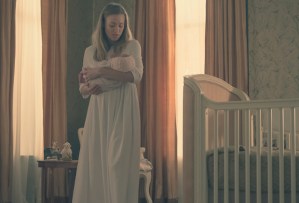 Because Fred is the worst in all ways, he interrupts, all agitated because Eden and Isaac the guardian are missing. Then he starts ranting to Serena about lust and such, but she tells him to get away from the baby if he’s going to be such a negative nelly. And then Serena tries to get Holly to latch onto her breast, but that kid survived a near bleed-out on a living room floor in her first moments of life, so yeah, she’s going to hold out for the real thing. Upset, Serena yanks her robe closed and apologizes to the squalling infant.

EXIT FOR EDEN | Eden and Isaac don’t get far before they’re caught. Nick begs Eden to say that the guardian coerced her, but she refuses to lie. “All I wanted was to make a family,” she says, apologizing to her husband for not loving him or wanting to have his baby. He says he’s sorry for not being kinder to her. “Let’s forgive each other, then,” she says.

Then Eden and Isaac are shackled and led up onto a diving board at what looks like a high school pool while the Waterfords, Nick, June, Rita and a bunch of others (including Eden’s mother and sister) watch. The pair is accused of infidelity, but they won’t renounce their sins. Eden is so much of a baller — a phrase I never thought I’d type — that she even starts reciting 1 Corinthians 13:4 (“Love is patient, love is kind”) as she and her man are weighted down and pushed into the deep end to drown. Later that night, Nick brushes off June’s attempt to comfort him. Then June heads upstairs, where a distraught Serena quotes a Bible verse about god protecting children, then allows June to nurse Holly while she watches. 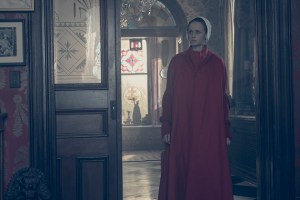 MEET THE NEW BOSS | In another part of town, Emily is reassigned to Commander Joseph Lawrence, the man who is considered the architect of Gilead’s economy. “I’m wondering why such an important, brilliant man will take in such a shitty handmaid,” she says — but that answer soon becomes a little clearer. His martha is missing an eye, swears and calls him “Old Man” to his face. There’s art on the walls and books splayed out on every flat surface. And when he comes out to meet Emily, he’s played by Bradley Whitford.

The new commander quickly dismisses Aunt Lydia, saying his wife isn’t feeling well and won’t be coming out to meet them. And then things get really weird. He catches Emily reading and, as she tries not to freak out in fear, muses about how women lose fingers for reading now instead of hands like in the old days.

Later, Mrs. Lawrence approaches Emily in her room and divulges that her husband is a terrible man. “The Colonies. He planned everything. He figured it all out. And I said real people are digging up that dirt and it’s poison,” she says, more than a little unhinged. Joseph enters, carries her bodily away and throws her in her bedroom, locking the door. Then he beckons Emily downstairs and pours them both a beer.

“We value privacy in this house, you understand?” he says, kicking off a conversation that indicates he knows alllllll about Emily, inside and out — literally. “Have you healed properly?” he asks, and Whitford is doing this weird breathing thing that exponentially ups Lawrence’s creep factor. Is he a worse deviant than the rest of Gilead’s Repressed White Dudes? Or, perhaps fueled by guilt, is he maybe resistance-sympathetic? OK, Handsmaid’s Tale, I’m intrigued.

Ready for the next episode? Read The Handmaid’s Tale Season 2, Episode 13 recap here!