The Handmaid’s Tale‘s second season wraps with quite a doozy: Faced with the choice of escaping Gilead with her infant daughter or staying behind to try to free her older child, June chooses to remain where she is in the hopes of helping Hannah from the inside.

Did I mention that Emily, too, is on the path to No-More-Bonnet-Land? And that she stabbed Aunt Lydia with a knife?! Or that Commander Lawrence isn’t quite who we thought he was? Or that Serena is now missing a pinky? And where does baby Holly/Nichole end up?

Yeah, we’ve got a lot to unpack. Read on for the highlights of “The Word.”

IF I WERE A BOY | As June and Rita fold Eden’s clothes, June voiceovers that heretics don’t get burials or memorial services in Gilead; instead, they’re used as animal feed. “All we leave behind is the uniform: wife, handmaid, martha, mother, daughter, girlfriend, queen, bitch, criminal, sinner, heretic, prisoner,” she adds. Rita feels guilty for not being nicer to Eden, a sentiment June tries to allay by saying, “I slept with her husband.” The women find a Bible among the girl’s things; there are notes about God and faith scrawled on the pages.

June brings the book to the greenhouse, where Serena is hanging out with baby Nichole. Mrs. Waterford doesn’t share June’s regret or grief about Eden’s death, remarking that Nick’s wife “wasn’t strong enough.” This incenses the handmaid, who starts to yell at her mistress. “How are you going to keep her safe?” she cries, indicating the infant. “Are you going to lock her up here like an orchid?” And when Serena replies that her daughter will understand and obey the word of God, June spits, “She cannot read his word!” 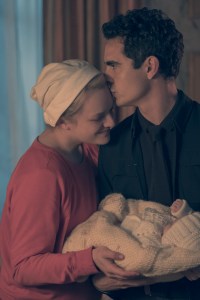 ONE HAPPY (SECRET) FAMILY | Back in the house, June is shocked to learn that Eden’s father — who is visiting to apologize for his daughter’s behavior — was the one who turned her and Isaac in to the authorities when they arrived at the family home together. “It reflects well upon your family,” Fred smarms at the dad, and for the first of many times this episode, I want to rip out his stupid beard hairs one by one and make him eat them.

When everyone but June is gone, she’s spoiling for a fight. And she gets one. “What are you going to do when they come for your daughter,” she growls, and in reply, he closes the door and then slaps her across the face. AND THEN SHE SLAPS HIM BACK. (If you’re scoring at home, this was the moment Michael Ausiello alluded to in his most recent Ask Ausiello column.) Fred grabs her by the face and pushes her down onto the sofa. “You are the misery of all men. All of you,” he sneers.

Later, Nick finds June icing her cheek up in her bedroom. “Your girlfriend is a badass,” Rita observes, which makes him smile. Later, when he starts to come undone a little bit, June sneaks him down to the nursery so he can hold their baby for the first time. “Look what we made,” June says, beaming. He’s smiling, too. In fact, I’ve never seen Nick exhibit this much sustained emotion. It’s the equivalent of a sprinter suddenly jumping into a marathon. Get that man some Gatorade! He must be exhausted. “Holly, this is your daddy,” June adds, drawing him close and whispering, “I love you” for the first time.

SERENA TAKES A STAND | Later, June, Emily, Janine and another handmaid walk together. It’s the night of Emily’s first ceremony with the Lawrences. She notes that it’s also almost the 7th birthday of her son, Oliver. Emily is not OK about it, so June tries to make her feel better by saying that they’ll celebrate in some fashion. “I’m glad I got to come back here. I’m glad I got to see you again, June,” Emily tells her friend in such a fatalistic way, I write in my notes, “THIS DOES NOT BODE WELL NO NO NO.”

Meanwhile, Serena and the rest of the teal set are hanging out elsewhere. Little Angela looks great; she’s healthy and putting on weight, Naomi proudly notes. Serena asks her if she worries about her daughter’s future, and Mrs. Putnam parrots that she puts her faith in Gilead. But when Serena subtly feels her out about whether she thinks “all the children, boys and girls” should have a life of purpose, Naomi indicates that she agrees — and some of the other wives have opinions on the matter, as well. 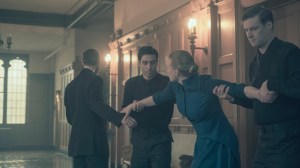 Before you know it, Serena and a bunch of other wives are standing before Fred and the rest of Gilead’s ruling council, proposing an amendment that would allow girls to be taught to read so they — like the boys — can understand the “gift” of Scripture. And when Fred tries to dismiss her, she whips out Eden’s Bible and starts reading. I know this isn’t The Colbert Report, Fred, but you just got The Word. (It should be noted that when Serena starts to read, a bunch of the wives scurry away like the pious cockroaches they are.)

Outside the chamber, Serena tells her husband that her actions were intended “to set an example for our daughter.” He looks at her. “And so you have,” he says, as two Gilead thugs enter to drag her away. As she cries for him to make it stop, Fred calmly turns and walks away.

When they eventually return home, Serena needs help to get upstairs. Fred chalks it all up to a “difficult day,” but when June gets Mrs. Waterford alone, she learns that Serena is now missing her pinky finger — the standard punishment, you’ll remember, for women who read. “I tried,” Serena says, broken. (Side note: This is not news, but damn, Yvonne Strahovski has been a revelation in this role this season, right?)

Downstairs, June can’t believe that Fred let the punishment happen. “We all have our roles to play. Serena needed to be reminded of hers,” he says before hinting that if June is “obedient,” she might be able to stay in the house with the baby. Then he starts talking about how they can have another kid, and she honestly looked less nauseated when she was choking down that green juice of Aunt Lydia’s. “Go f—k yourself, Fred,” she whispers.

EMILY’S REVENGE | Over at the Lawrence home, Emily stealthily nabs a knife from the kitchen and slips it in her waistband. But when she starts to prepare for The Ceremony, the commander has zero interest and sends her to her room; when Aunt Lydia visits the next day, it’s clear that Commander Lawrence lied to make the older woman believe that everything went according to (terrible horrible awful) plan. And when a baffled Emily keeps mum, Lydia nastily remarks “it’s like I cut out your tongue.”

And that’s all the impetus Em needs to plunge the weapon into Aunt Lydia’s neck (another gasp from me!) and kick and push her down the stairs (!!) until she’s bleeding on the first floor landing. And that’s how the martha finds them. She calls for Lawrence to get an ambulance, and Emily is banished to her room, where she laughs in a highly unhinged way until she begins to sob.

Lawrence puts Emily in the backseat of a car, then gets in the front and they’re driving, but he won’t tell her what’s going on. He turns on Annie Lennox’s “Walking on Broken Glass,” which I love but will from here on in fill me with dread because it certainly feels like Em — who is sobbing from fear — is not long for this world. 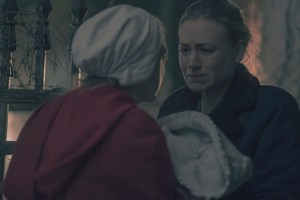 IT’S GO TIME! | Back at the Waterford house, June is feeding Holly when Rita hurries into the room and drops this bomb: “Come. We can get you out. You and the baby, but you have to go right now. Go get your shoes.” WAIT, WHAT? She indicates that “friends, marthas” can help ferry June to safety, using the chaos caused by a nearby house fire as cover. So June retrieves her photo of Hannah, holds the baby close and gets to steppin’!

When Fred realizes that the baby is missing, he runs to June’s room and sees that she’s written “Nolite te bastardes carborundorum” in huge letters on the wall. The commander is livid, but finds himself being physically restrained by Nick, who refuses to start a search team. (Yay Nick!)

Outside, though, Serena is in the greenhouse and sees June trying to creep away. There’s no time for subtlety, so June goes for the hard sell. “Serena, I can get her out. She cannot grow up in this place,” the handmaid says, begging her mistress to let them go. “I know how much you love her,” she adds. June gives her the baby to say goodbye, and Serena is crying so hard, she can barely get out the prayer she’s trying to say over little Holly. “Blessings on you, Serena,” June says, finally leaving the property with the martha who’s come to retrieve her. 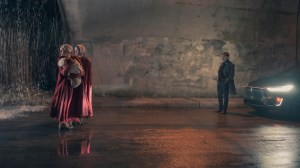 JUNE ISN’T BUSTIN’ OUT ALL OVER | They cross backyards and such, with various marthas helping June along the way, until they get to some tall grass. June is told to hold steady there; while she’s waiting, she flashes back to singing The Velvet Underground & Nico’s “I’ll Be Your Mirror” to a young Hannah. “Holly, this is your sister, Hannah. Isn’t she pretty?” June says in the present, pulling out the photo. “Maybe you’ll meet her one day. You’re gonna meet her one day.”

Then a car pulls up… and it’s the one with Commander Lawrence and a totally bewildered Emily in it. “What is happening?!?!?!” she demands. “You’re getting out of Gilead,” he says, getting back into his vehicle and leaving. “Have a nice life!” Well this is an unexpected treat, no?

Emily clambers into a van that shows up and yells for June to join her… and that’s when I realize for certain that June is going to do something noble but stupid. She puts the baby in Emily’s arms and says, “Call her Nichole. Tell her I love her.” Then, over Emily’s protests and my screaming that this is possibly the worst decision she could ever make, June shuts the door and the van leaves. As June pulls up her hood, “Burning Down the House” plays on the soundtrack.

Now it’s your turn. Grade the episode via the poll below — and weigh in on June’s decision to stay in Gilead — then hit the comments to tell us your thoughts.