In The Handmaid’s Tale‘s third installment, we get the Republic of Gilead’s origin story. And forgive me if you think I’m overreacting, but the fictional downfall of American society looks a heck of lot like the real now.

The erosion of rights. A complacent citizenry. Leadership that encourages a culture that makes those with hate in their hearts feel emboldened — heck, entitled — to voice whatever atrocious thought crosses their small minds. All of these factors contributed to a world in which women are reduced to property and in which resistance can result in horrifying mutilation. (Yeah, we find out what happens to Ofglen, and — shocker — it’s not good.)

Read on for the highlights of “Late.”

HOW IT ALL HAPPENED | While Offred is still reeling from Ofglen’s abrupt disappearance, she recalls the sequence of events that led to the rise of Gilead. Congress was “slaughtered,” she tells us via voiceover, an act that was blamed on terrorists. The Constitution was suspended, initially temporarily, and martial law kicked in. A flashback shows us June and Moira first experiencing the changing tide in a coffee shop, where a male barista feels perfectly just calling the women “f–king sluts” and then gloating when their bank cards won’t work.

At the publishing house later, June’s boss apologetically announces that he’s being forced to fire all of his female staff members. He’s flanked by men with machine guns, so the stymied women pack up their things and leave. That’s the day that all women’s assets, bank accounts and property are turned over to their male next of kin, a development that sends people into the street to protest. Moira and June join them, but when armed officers start firing on protesters, the friends run. They shelter in an empty coffee shop, huddled together while the situation devolves outside. It is SCARY. 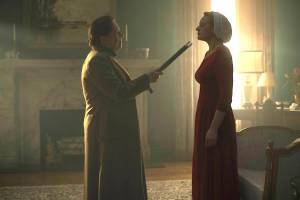 IX-NAY ON THE ABY-BAY | In the present, Offred’s period is a few days late, which mean she’s getting special treatment from a baby-hungry Serena Joy, whose crazy eyes telegraph how desperate she is for the handmaid to be pregnant with the Commander’s child. (Side note: I feel sorry for her for a moment, then I think about her behavior at the end of the episode, and I move on.)

A cryptic Nick tells Offred that “Everybody breaks, everybody,” but is it a warning or advice? Hard to tell and no time to think about it, because soon the handmaid is being hauled into a room at the Commander’s house and questioned by an Eye of God and Aunt Lydia. Offred (naturally) fears that the interrogation is related to Ofglen’s network, but it turns out that the Gilead higher-ups just want to persecute the former academic for being a lesbian, aka “gender traitor” and getting in on with one of the marthas. Offred gets a little feisty with Aunt Lydia and winds up getting tazed a few times before Serena Joy runs in and stops the beating, screaming, “She’s pregnant!”

Thing is, she’s not. And when she has to deliver that disappointing news to Serena, who happens to be scoping out a room for its potential as a nursery, things get ugly. (Well, uglier.) The blonde immediately drops any kindness she might have displayed earlier — and props to Yvonne Strahovski, because you can see the change in her eyes even before she moves a muscle or says a word — then manhandles Offred into her room and decrees that the handmaid can’t leave. “Things can get much worse for you,” she spits before shutting the door.

THE UNKINDEST CUT | And you know what? Based on the update we get on Ofglen at the end of the episode, I’m inclined to believe Serena. Ofglen, wearing a jumpsuit and Hannibal Lecter-esque mask, is brought before a sham of a court alongside her lover. The law is biblical, and the verdict is swift: The martha is found guilty, as is Ofglen, but the latter is given “redemption” thanks to her functioning egg factory.

The women’s final moments together are silent, thanks to the masks, but filled with terror and tears as they clutch hands in the back of a van. Then the doors open, the martha is forcibly removed and hanged in front of Ofglen’s face. (And if you haven’t seen the scene, let’s just say there’s a reason TVLine recently awarded Alexis Bledel Performer of the Week.)

The next time we see Ofglen, she’s waking up, bewildered, in a sterile-looking clinic with bandages covering her nether regions. Aunt Lydia refers to her as “Emily” and explains that the handmaid can still bear children “but you won’t want what you cannot have.” (AKA genital mutilation is alive and well in this dystopian future.) The older woman leaves. Ofglen/Emily works through a variety of emotions until she reaches rage. Then, she screams.

Your turn. Thoughts on the episode? Hit the comments!

Ready for the next episode? Read The Handmaid’s Tale Season 1, Episode 4 recap here!