Warning: This post contains spoilers for The Handmaid’s Tale‘s Season 4 finale. May the Lord open!

The Handmaid’s Tale‘s Serena Joy Waterford is many things, but a fool is not one of them.

So when she eventually learns what the rest of us do at the end of the Season 4 finale — that Fred Waterford has gone to that great commander’s council in the sky — it won’t take long before she zeroes in on a certain former handmaid who might’ve been involved.

“I can’t imagine that not crossing her mind,” Yvonne Strahovski, who plays the aforementioned commander’s wife, tells TVLine. “I can imagine June purposely telling Serena about it, because she wants Serena to live in absolute fear.” (Check out what Elisabeth Moss and showrunner Bruce Miller had to say about the hour.)

When we talked with Strahovski about the events of the season-ending episode (read a recap), we covered a lot of ground — what Serena did and didn’t know, the Putnams’ visit, Mrs. Waterford’s future — but of course, we kicked off the conversation with…

TVLINE | My condolences on your loss.
Oh! [Laughs] Thank you.

TVLINE | We’ll get to Fred in a moment, but let’s backup to when the Putnams visited. Do you think that was the first time that Serena really considered that she and/or the baby might wind up back in Gilead?
Yes. I do. I think it definitely was a massive reality check for her, to have a big piece of Gilead come in to her, to meet her and visit her, and for her to realize that. The way that Naomi was speaking to Serena — and then, obviously, she knew what Warren Putnam had said to Fred — it was very much a manipulative visit on their part, which was definitely noted by Serena. The severity of the situation really hit home for her.

TVLINE | It was shocking to me that, even as a detainee in Canada, she has way more freedom than a non-detainee woman in Gilead.
Yeah. Which I think gave her the confidence to embrace it a bit more, and indulge in her relationship with Mark Tuello, and indulge in putting her foot down a little bit more with Fred. And indulge in her mind [about] what it means, what the finish line could really be for her. 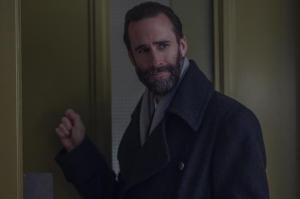 TVLINE | Do you think that Serena has any inkling or suspicion that Fred might not make it to Geneva?
No. I think she thinks that that is what will happen, for sure. I can see her perhaps concocting a plan that maybe she’ll try and figure him out later, as in maybe she’ll take him to court personally or something. I don’t know. I’m just kind of thinking out loud, because you made me think of it. But other than that, no. I think she thinks he’s going to Geneva, that this is actually happening.

TVLINE | Do you think Serena has it in her to build a future where she can maintain the status that she and Fred have achieved, only without him around?
One thousand percent. Oh yeah. I feel like she’s got that planned out in her brain already. She’s always five steps ahead in some way, shape or form…

I can see her becoming a political figure, and having success with her fan club in Canada, or something, you know? [She could] keep preaching what she used to preach, pre-Gilead. I can see her totally taking control, and being that person. But then again, I really think the fear of God is going to be put into her when she finds out what’s happened.

TVLINE | Do you think, once Serena finds out that Fred is dead, she’ll have any suspicion that June was involved?
Yes. I feel like she’ll know in her heart. They know each other so well, I can’t imagine that not crossing her mind… I can imagine June purposely telling Serena about it, because she wants Serena to live in absolute fear, if and when she gets out of the detention center. I mean, could you imagine?

If you knew that someone was out there, outside, capable of doing something like that to your husband or your partner, and then, you’re trying to live out in the real world, with a baby? I just think that is the most paranoid existence you could ever live, knowing that June has done what she’s done.