Thought June Osborne’s escape from Gilead was satisfying? Try watching The Handmaid’s Tale heroine and her fellow former handmaids kill Fred Waterford with their bare hands in the Season 4 finale.

The season-ender, which began streaming Wednesday, ends with June, Emily and a bunch of righteously furious former ‘maids chasing the state-sanctioned rapist through the woods and ripping him to pieces once they catch him. The moment is cathartic. It is bloody. And it seems to put June on a path that could take her far from the husband and daughter with whom so so recently reunited. (Read a full recap of the finale, then hear what series stars Elisabeth Moss and Yvonne Strahovski had to say about the season-ender.)

TVLine chatted with showrunner/executive producer Bruce Miller about what pushes June to engineer Fred’s demise and what her actions might mean for the already-renewed drama’s next season. (Also, we drilled him about Nick’s wife. #TeamJune4Eva!)

TVLINE | Obviously, killing Fred has been a fantasy of June’s for a while now. But how long ago do you think it coalesced into an actual, actionable plan?
Oh, very recently. I think it was a fantasy right up until the time it happened. “I want to kill Fred” or “I want this guy to die” is a thought you have in the front of your mind, but actually making that turn into action is more difficult. She’s had that thought before, but only right up at the end did June turn to feeling like she needed to do it, that if she didn’t do it then it wasn’t right, you know? It wasn’t just something that needed to happen, it’s something that she needs to do. 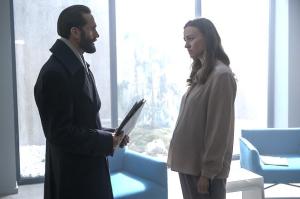 TVLINE | June and Luke’s conversation in the car felt like a very clean break: He doesn’t think she would actually go through with putting Fred on the wall, and she’s very much considering it. Do you think that’s a clear point of division for them?
There are a lot of clear points. So, certainly it’s exactly as you described within that moment. But I do think it’s almost as much that he recognizes in her something he hasn’t seen before, a new aspect to her personality. But also, honestly, it’s the fact that he doesn’t at all think that she’s going to do it. That lands on her, too… If she had said that in front of someone who knew her in Gilead, they would have assumed that she was going to do it.

TVLINE | Do you think June would have taken the action she did at the end of the episode if she felt Hannah were still someone she could rescue? Has she lost hope on that front?
Well, she’s made a lot of progress. I mean, if you think about all the things that she’s gained this season that people told her she would never ever ever get, and certainly she didn’t think she’d ever get. So, the number of impossibilities that she has already realized are so huge. But I actually don’t think the stuff with Fred has anything to do with the Hannah stuff. That’s the interesting thing: She’s so blinded by it that she doesn’t think about anything else, that she can’t think about anything else. She knows how bad it is for her, she knows it potentially could be terrible for her and also potentially may not be the best thing in the long run for knocking down Gilead. But that’s the thing — it’s an irresistible force, and the thing that’s troubling is that she feels like she’s out of control.

TVLINE | June’s conversation with Emily on the stairs was heartbreaking, the sense that even after everything she’s happen, all she can focus on is what she sees as her failure, that a good mother would be able to push her anger aside and focus on her family.
Right, because mothers don’t obsessively plan and then execute death penalties against people. A mom generally doesn’t do that. So for her, it makes her feel like she’ll be in another box permanently. “If I was a mom, if I was really a mom, I’d be able to be a mom and let this stuff go.” 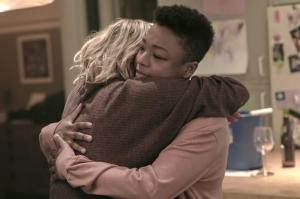 TVLINE | That brings me to the idea of counseling. We see June in Moira’s group, but we don’t see her going through a lot more counseling or anything along those lines. I wondered what the conversations were like regarding what or how much of that to show, given that June is a survivor of trauma.
Yeah, and I think that’s a misstep on my part. She certainly would have been offered therapy. Just like, you know, offscreen she went to a doctor or offscreen she ate a meal, she bought some clothes. There’s so much stuff that happened offscreen. One of the things she would have done is, according to our research, immediately been offered therapy, immediately, but probably in the timeframe we’re talking about in the first two episodes, it probably wouldn’t have started yet. I mean, we’re talking about a couple of days. She’s just got to get her feet under her.

We had a line of dialogue where she said, “Maybe I should go back to the therapist. I cut it, It didn’t sound right. Anyway, the truth that we found [while] talking to survivors of this kind of trauma, a surprising number of them don’t continue with talk therapy and don’t find it helpful and don’t like it and don’t want to go. They go once and the person talks, and they leave, because why would I want to sit here and relive not just the facts but the emotions of all of that. Why?

…So, it’s all fascinating, but nothing is a mistake, you know? People talk like, “Well, why won’t she go to therapy?” It’s like, of course she did. Of course. Of course. 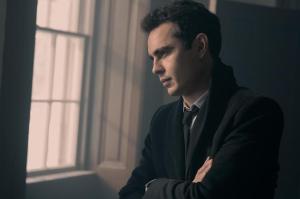 TVLINE | I have this highlighted and in all-caps in my notes, so we must address it: WHO IS NICK MARRIED TO?! And will we find out?
[Laughs] Yes, of course you’ll find out. I mean, I’m shocked he wasn’t married before. As they say in the first episode, I guess he was “issued” another wife, which is just the greatest word Margaret Atwood puts in the book. So, yes. I think we’ll meet her. The thing I wanted to see was the June/Nick side of it, how it’s affecting that, and I think we’ll move on to kind of seeing how it’s affecting Nick and his wife at home a little in the future.