Weeks have passed since its premiere, so it’s cool now to talk about Tell Me Your Secrets‘ big twist, right?

That was rhetorical. We’re doing this. (If you’re looking for a Spoiler Alert, consider yourself warned.) As it happens, TVLine recently got the series’ star, Lily Rabe, on the phone to discuss the Amazon Prime thriller’s first season.

The dark drama centers on Rabe’s Emma, the former girlfriend of a serial killer who may or may not have aided him in his murder spree — thanks to post-traumatic stress, her memories are frustratingly fuzzy. Meanwhile, Amy Brenneman plays Mary, the mother of one of the killer’s victims; her desire to find Emma, who is in Witness Protection, and have her answer for her supposed crimes becomes a twisted force that reshapes her entire life (and not for the better).

In the Season 1 finale, we learn that Mary’s daughter, Theresa, in fact was not one of Emma’s boyfriend’s victims… she was his lover (!) who aided him in his crimes (!!). So that’s where we jumped in. (And if you want to read some recaps, check out here and here.) 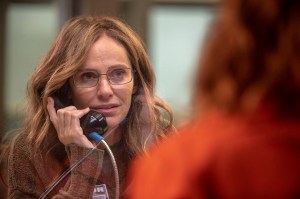 TVLINE | There was so much ambiguity for Emma about what happened with Kit: Do you think she ever entertained the idea that Theresa might still be alive?
That’s such a great question. I think yes… because of what has happened and because of how her sense of the truth has just been shattered… Everything is so shaky for her that I feel she has no confidence in any of it. And so because that event isn’t something that she remembers, until she remembers it, her sense of Theresa or what has happened is in that gray area, that panicked gray area.

I liken it to water, because the way her memory feels is like a fluid. That she has these things that, like with waves, will come in and out. And so, the events of what happened isn’t clear, so she couldn’t conclude then that Theresa is dead — even though she isn’t, you know what I’m saying? It’s like because no steps along the way are solid in her recall, then absolutely I think she’s still terrified of Theresa.

TVLINE | It just struck me how few breaks Emma gets in the entire first season.
She really does not get a lot of breaks. [Laughs] 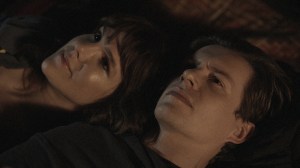 TVLINE | Do you think of her primarily as Emma? Or Karen?
Most days we shot Karen days they were entirely Karen, and most days I was shooting Emma they were entirely Emma. There were a few days where we had to switch over, but like everything from — like, I had acrylic nails [laughs] — so it was never great for production to have those. They happened occasionally because of the location or something, but for the most part it would be like a Karen day. And I remember, I started to kind of notice on the drive to work I would just feel this really pervasive powerful feeling of lightness and relief. I’d very quickly realize it’s because I was going to play Karen, which, when you think about it in terms of what actually is happening to Karen in the story that, I shouldn’t be feeling great about it. [Laughs]

But actually because of who she is and who her spirit is, she hasn’t lost her sense of self. She hasn’t lost her feeling about hope and optimism and believing people. So, even if she’s believing the wrong people, I still got to believe them in the moment of shooting the scenes, and that felt like such a great relief. I actually really loved those days of getting to really crawl into her skin and just be her entirely.

And so, even though I was Emma for the large majority of the time, she is Karen. I mean, that’s who she is. The spirit of Karen, even though it’s been utterly destroyed, it was always there, even in the playing of Emma. It was this tiny little light that was so, so dim, but it was still there. And so, I would say Karen — even though I mostly was playing Emma, if that makes sense.

TVLINE | So six months after I had a baby, I did a half marathon and it was a death march. And you —
Congratulations! Was it OK?

TVLINE | Yes, in that I didn’t die. But right before this show, you had a baby and then nearly immediately got ripped beyond all belief and did your own stunts. So first, I’m jealous. And second, could you please talk to me about that process? It seems like it would add so much more of a demand to an already tough role.
Yeah, it was. And yet, it was a wonderful release. And women are so amazing. The whole experience of pregnancy and birth, if you weren’t connected to your body before that, you are after that experience… I never have been able to do things very well in moderation. [Laughs] I know that it’s a great skill, but it’s like moderation and time management: These are not my strong suits. I’m much better at the all-in-or-nothing-at-all. But I really did love doing the deep dive into it and going from zero to a hundred, and I knew I could do it.

It was a challenge, and of course you know don’t want to fail. But also I was determined, and I knew I could do it. I knew that my body was capable of it. And I’m very willful. [Laughs] And once I made the decision that I was going to do it, which happened very quickly, I was just all in.