Warning: This recap contains major spoilers from Tell Me Your Secrets’ Season 1 finale.

Tell Me Your Secrets‘ Season 1 finale handed out revelations with abandon. Pretty much all of the questions raised throughout the season were answered, culminating in a series of final moments that pulled off a huge twist and set the series up for a potential Season 2.

Who was killed? Who turned up, surprisingly alive? And, for the love of Emma’s sweaty tank top, was Karen involved in Theresa’s killing or not?! Read on for the highlights of “The Dead Come Back.”

HAIL MARY | Immediately following the events of the previous episode, John restrains Emma with duct tape and coos that “It doesn’t have to be so bad,” if she’ll only tell him what he wants to know. As her fear mounts, he points out that she helped Kit commit his heinous crimes, but she fights back. “I loved Kit. I loved him, that’s all I did,” she says. Eventually, he kicks her in the head, knocking her out.

Mary arrives soon after. She makes it into the cabin and finds Emma, still taped-up, on the bed. “He’s here,” Emma whispers, just before John busts through a window. Mary and John get into it in the living room while Emma fights to get out of her restraints; at one point, Mary shoots John in the abdomen, but it doesn’t slow him down much. 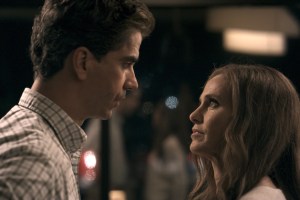 He and Mary struggle on the floor, oblivious to the fact that Emma has gotten free. She jumps on top of John and starts whaling on him with a rake while Mary watches. When he is a bloody, unmoving mess, Mary slowly creeps over and embraces the woman she hates.

Still, it’s not like they’re suddenly besties. “You sent a rapist to hunt me down,” Emma says. “You were a monster. I needed another one to find you,” Mary says. “Yeah, well, you found me, too,” Emma replies. And as soon as Emma has dragged John’s body into a closet and locked it up, she finds herself on the wrong end of Mary’s gun.

THE TRUTH ABOUT THERESA, PART I | “Did you take her? My daughter? Because I can’t go on without knowing,” Mary says, beside herself. Emma starts talking about how people can love other people yet never know something crucial about them, and we think she’s talking about Kit, but she’s really describing the relationship between Mary and Theresa. “Everything you thought was me, was her,” Emma says.

Wait, what? We learn that Theresa was with Kit before he met Karen/Emma (!), and that Theresa was a willing participant in his killing spree. “Your daughter, she’s the monster,” Emma says. Remember how Jake found that photo of Theresa’s swim coach with his eyes scratched out? “She was 13 when it started,” Emma says, alluding to a history of abuse that Mary later confirms — via an unearthed cache of Theresa’s own journal entries and letters from Kit — is true.

“You think you lost her seven years ago?” Emma tells a devastated Mary. “I think it was a long time before that.” While Mary reels from this new knowledge, unbeknownst to either woman, Jess’ bloated body pops up in the water nearby. 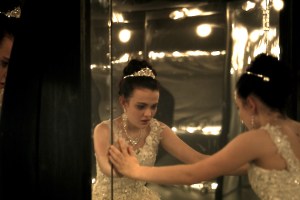 IS TOM OK?! | Emma finds a motel key in John’s stuff and goes there, finding Tom alive but in rough shape in the bathtub. Meanwhile, at the Festival of St. Jerome and St. James, a dolled-up Rose and her family hold jovial court in the public square… until Abel carries Jess’ corpse into the middle of the proceedings and accuses Bodie, Rose’s dad, of killing her. He dumps her body and everyone runs.

Rose takes shelter in the house of mirrors in the nearby carnival, calling Emma’s voicemail and babbling about how “I didn’t want to hurt her. I just wanted her to shut up and stop talking about my daddy.” But Bodie finds her and takes away the phone, saying he’s going to make everything better.

This is probably a good time to point out that Pete’s wife, Lisa, has informed him that she’s leaving him: After she was in the storm shelter at the cabin — which he told her he’d sold — she knows he’s been lying to her and Emma. She says that he told her it was “over” at St. Jerome, and she wants to know who made those marks on the wall. And when Bodie calls Pete — who is clearly his apprentice in the nefariousness going on at the children’s home — he makes it clear that he’s going to pin all the terrible things he’s done on Emma.

So Bodie goes to Emma’s… where John is not in the closet anymore! He has recovered from his beating, or at least, recovered enough to surprise Bodie and get the drop on him.

THE TRUTH ABOUT THERESA, PART II | Despite knowing how things really happened, Mary returns to Texas and calls a press conference blaming Emma for the killing of Amy Walker — aka the young woman whose mother’s conversation with Kit Mary posted online without her consent — “and many, many others.” She announces Emma’s location and new name, and demands justice. The kicker? By now, we know that Theresa actually was the one who offed Amy.

Later, Mary invites Theresa’s swim coach to the house. (In prior scenes, we see that Jake and Saul are onto her illicit activities in various degrees, and both have deserted her.) The coach is barely inside when she mentions that her daughter kept a journal. “Theresa kept a journal?” he says, nervously, the front door closing behind them. Then a gunshot goes off inside the home.

Tom and Emma watch the press conference, then she announces that she has to go on the lam. Tom tries to argue that he can keep her safe. “You can’t,” she says sadly. “No one can.”

So she flees to Minnesota to pick up Freya before taking off for a new life. But Freya’s foster mom is confused when Emma introduces herself as Karen. “Karen’s been visiting Freya since she was tiny,” the woman says, as Emma’s face fills with terror. “Freya’s gone.”

Then the camera cuts to Theresa, alive (!) and now a brunette, driving a car. Freya is with her. “It’s just you and me now, for always,” she tells the little girl.”

But Emma’s got a clear purpose now. “I’m not the person they’ve made me into,” she says in voiceover. “Their lies have made a nightmare of my life, and now I will make a nightmare of theirs. And I will find you, no matter what I have to do.”

Now it’s your turn. What did you think of the finale? Were all of your questions answered? Grade the episode via the poll below, then hit the comments!