The opening moments of Tell Me Your Secrets, Amazon’s new thriller starring Lily Rabe (The Undoing) and Amy Brenneman (The Leftovers), set up everything you need to know about the series: Rabe’s Karen can’t remember whether or not she took part in murders perpetrated by her serial killer boyfriend, and Brenneman’s Mary refuses to believe that Karen doesn’t know something about the mysterious disappearance of her daughter, Theresa.

“Can you really not remember?” Mary asks, starting to cry as she sits on the visitors’ side of a plexiglass divider at the state prison. “Please tell me the truth.”

The drama’s 10-episode first season, which dropped in its entirety on the streamer Friday, then hops from past to the present-day. Karen is released from prison, given a new identity (Emma) and ferried to her new home in Louisiana by her psychologist Pete (Without a Trace‘s Enrique Murciano). “You need to live a quiet life here, not attract attention to yourself, and be careful who you form attachments to,” he tells her before depositing her in a cabin near a river.

Through flashbacks, we learn that Emma (fka Karen) was wildly in love with a man named Kit Parker, a tattoo artist who was convicted of the murders of several young women. Karen did time for aiding and abetting him, but she’s not exactly sure what she did: She’s blocked most of the memories of that part of their time together. Was she a willing participant in the horror? Was she a victim who narrowly avoided tragedy, herself? In this first hour, it’s very tough to tell. And Kit isn’t providing any answers: As we’ll learn later, he killed himself in his cell after reading a goodbye letter from Karen.

Meanwhile, back in Texas, Mary has dedicated her entire life — and a recently formed foundation — to finding Theresa, who’s been missing for several years. Mary insists that Theresa is alive and out there somewhere. Her husband, Saul (Nashville‘s Charles Esten), and son, Jake (The Fosters‘ Elliot Fletcher), don’t agree; Mary’s refusal to admit that Theresa might be dead has driven her and Saul apart, though they’re friendly and he lives in a trailer parked in the backyard of their home. 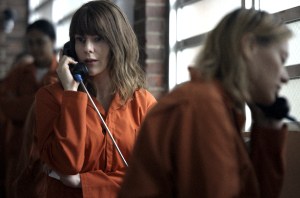 One day, a convicted rapist named John (The New Adventures of Old Christine‘s Hamish Linklater) arrives at the foundation for a meeting. He has done his time and now offers his, uh, unique services to Mary’s organization. “I was every woman’s worst nightmare,” he says. “I can tell you everything about the gaps where ladies think that they’re safe.” When he won’t engage with her about what might have made someone like Theresa, specifically, a serial criminal’s prey, Mary bids John good day.

Toward the end of the hour, though, Mary shows up at John’s door and hires him to find Emma for her. She gives him an envelope of information/credit cards and four weeks to make it all happen. “Otherwise, John, I will make sure everyone knows exactly who you are,” she threatens. “You are the man that we all dread.”

In Louisiana, Emma hasn’t been in her new town long before she intervenes in some mean-girl nonsense going down in a restaurant’s bathroom. When a girl named Rose (Gerald’s Game‘s Chiara Aurelia) puts gum in the hair of a girl named Jess (Fargo‘s Emyri Crutchfield), Emma loses it and smashes Rose’s face into a mirror. 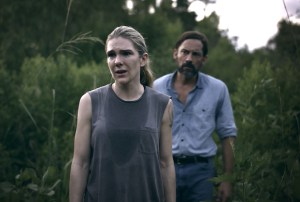 The act earns her an instant pal in the girl, who is a resident of a group home. Jess brings Emma to a hideout in the swamp where she goes to be alone, gives her a necklace and calls her “my true friend.” Emma, moved, thanks her. But later on, after Emma finds out about Kit’s death, she takes a whole bunch of pills and is really out of it when Jess comes banging on her door, seemingly in trouble. And when Emma recovers enough to look for the girl… she finds her, dead, in her secret hiding place.

What’s worse: Someone else is there, too, though Emma doesn’t really get a good look at the hooded figure before she makes a hasty exit.

But wait! In a final flashback, we’re in a Seattle hair salon. Karen (aka Emma) is the stylist, and Theresa (!) is her client. She requests a trim “and then I want to know the best bar in this town to get trashed in,” she says, a glint in her eye.

Now it’s your turn. Grade the series premiere via the poll below, then hit the comments with your thoughts!