Thursday’s Superstore finale can best be described as bittersweet. Because even though Cloud 9 went under — Zephra decided to convert most Cloud 9s into fulfillment centers and make the retail giant an online-only chain — the workplace comedy managed to end on an uplifting note, showing where all the employees (well, most of the employees) landed after the closure of Store 1217:

* Amy quit her corporate gig at Zephra and landed another executive job. Her future husband Jonah (!) eventually ran for city council. After they got married, they had a kid of their own: a son named Carter. (For more on #Simmosa’s fairy tale ending, click here.)

* Dina was hired to manage the Ozark Highlands fulfillment center. She took Sandra on as her assistant manager and hired Marcus and Justine as warehouse workers. Meanwhile, Dina and Garrett decided to keep dating after the store closed. (“Hanging and banging” totally means they’re official, right?) 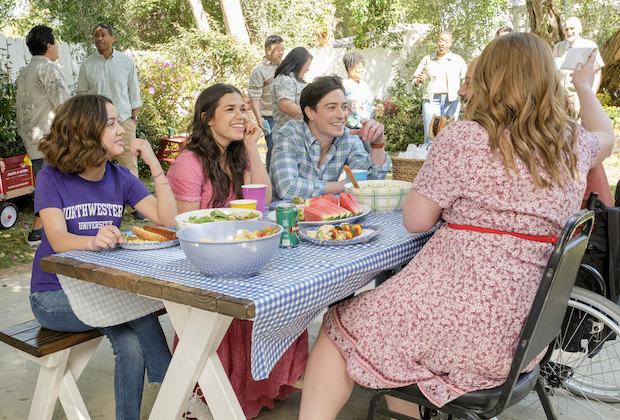 * Glenn reopened Sturgis & Sons with Jerusha’s blessing and hired Cheyenne and Mateo to come work with him. A picture of the late, beloved Myrtle hung behind the cash register.

* Everyone remained friends and eventually gathered at Glenn and Jerusha’s house for a picnic. If you were watching closely, you saw Mateo and Eric show off their wedding rings to Bo and Cheyenne.

In separate interviews, TVLine spoke with series star/producer Ben Feldman, as well as executive producers/co-showrunners Jonathan Green and Gabe Miller, about that series-ending time jump and what comes next: A Bo & Cheyenne spinoff? A full-blown revival? Read on to find out…

TVLINE | Where did the idea of doing a flash-forward come from? And why did it feel necessary here?
MILLER | We should say that the idea for that sequence came from [series creator] Justin Spitzer, to do that with a Garrett announcement. I think it was a way to sort of [strike] a [tonal] balance. We were allowed to have a more realistic and less upbeat ending for the store, but give a sense that things would be OK for these people. To do that all together in the same episode, we needed to play with time a little, which the show has never done. It made it kind of special.

TVLINE | Ben, what did you think when you first saw the flash-forward pieced together?
FELDMAN | Gosh, I loved that montage. Ruben Fleischer did an incredible job directing that. What was really nice about that was how emotional it was, because we don’t really do a lot of emotion on this show. We take a few steps back from it; we almost get into the roots, and then we turn around and leave. And I think it was earned after six seasons. An almost Six Feet Under-level flash-forward was earned by the end of this show, and it was very important. You wanted to see closure. You wanted to see these people happy and having moved on, and having found some sort of sense of place and community. For some characters, that meant staying on that same trajectory they were on before. That’s where they were happy. And for other characters, like Jonah, it was rising to a level that he was always hesitant or fearful of throughout the six seasons. There were a million different cuts of this, as notes were coming back and forth. I watched a lot of different versions of [it], and [there was] not a single one that I could get through with a face that I’d be happy having strangers see at the end. 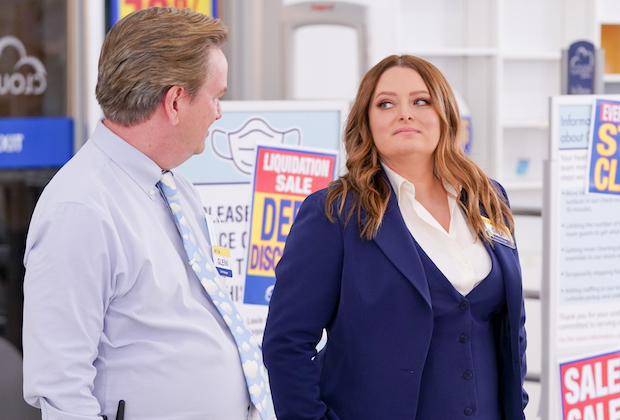 TVLINE | Beyond Amy and Jonah’s fairy tale ending, was there a moment in the finale that really struck an emotional chord with any of you?
MILLER | Dina and Glenn’s final moment, where Glenn kind of hands over the reins of the store, and they have a little… not détente, but an acknowledgment of their relationship over the years. I thought that was really sweet.
GREEN | Glenn hiring Mateo was another one.
FELDMAN | Glenn’s stuff, in general. The writers sent me broad strokes of [the finale] a long time ago. When they mentioned seeing Glenn at Sturgis & Sons, I started to describe it to my wife, [and] she just looked at me and said, “Do you need me to hold you right now? Are you OK?” [Laughs] And when Glenn and Dina stand there in the store, and Glenn is saying, “Take care of the old girl for me,” that just breaks me every time I see it. I find different things to be emotional about every time I watch that, and I wonder how much of that is because I was inside of it, and how much of that is just as a fan.

TVLINE | How did you decide where we’d see each character in the future, and where they’d wind up, both personally and professionally?
GREEN | As far as the specifics of where everybody ended up, we just talked a lot about [each of those characters] in the writers’ room and where we wanted to see some of them. We had all sort of toyed with the idea of Jonah getting into politics. At one point, early in our talks for Season 6, we were going to have him throw his energy into that, post-Amy, and then we ended up going a different [direction], largely because those stories would have taken him out of the store too much. But yeah, politics was always something we had talked about for him. And reopening Sturgis & Sons seemed like a natural place for Glenn to end up, in a way we’d feel good about. 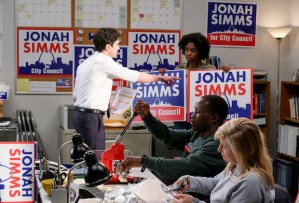 TVLINE | Say America Ferrera hadn’t been available to return for the finale, to bring Amy and Jonah’s story full-circle. If Amy and Jonah hadn’t gotten back together, do you think Jonah would have found the motivation to launch a bid for city council?
FELDMAN | Ideally, yes. That would’ve been a discussion I had with the writers… Jonah has grown, he has found a voice, and he is not just sort of teetering around with vague ideas of philanthropic work or fighting for a cause. [He would need] something a little more narrow and focused and energized, like city council. That was the fight [in his life]. Amy was the emotional support, the happiness and the soul.

Superstore Pilot Revisited: The Meet-Cute, a 'Moment of Beauty' and More 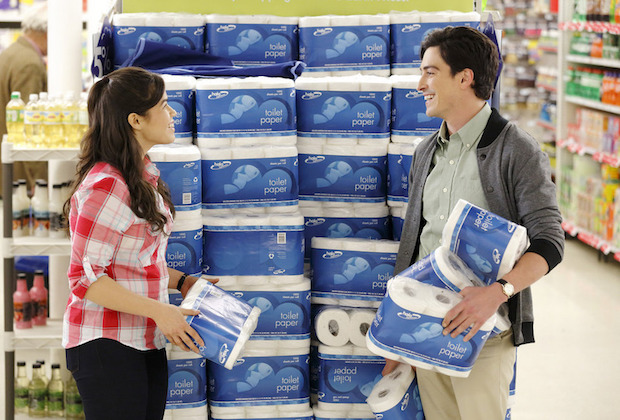 TVLINE | What do you hope the show’s legacy is?
GREEN | First of all, we want it to be remembered as a really funny show, but one that was a little bit of a snapshot of the times we’re living in, specifically of retail workers, who are a group of people who don’t get the spotlight very often and are underrepresented in TV and movies. We like that we’ve been able to give them a little bit of a voice.
MILLER | I would say the same, that we showed low-wage workers finding respect and dignity in their work, even if corporate doesn’t treat them [with respect and dignity]. From a comedy point of view, I’m proud of how deep our bench is in terms of characters, and how we’ve been able to develop side characters from just, like, one joke in an episode, to recurring, and in the case of Kaliko Kauahi’s Sandra, to a series regular.
FELDMAN | Among the usual things I think a successful show does is create a group of people that you consider almost your friends: people that would last in memory for a long time. I think this show is a time capsule for a specific time in American history, specifically working-class American history. I mean, we started this during Obama, all the way through Trump, and ended with Joe Biden. This was an interesting time to be alive. It was not always a great one, but that’s what this show was ultimately about. We talked about a lot of the issues, and we had conversations that Americans had. And not just Americans — most of the Western world, and other parts of the world, too. You’ll be able to watch this show 20 years from now and get some semblance of an idea of what the general zeitgeist was culturally, politically, et cetera, and that’s the thing I am most proud of.

TVLINE | Everything is getting revived or rebooted these days. Ben, could you see yourself playing Jonah again?
FELDMAN | I mean, look, some shows do a revival for, like, an episode, which would be great. But an entire series of Jonah? No. I think I’ve done enough [with] Jonah, and there are other characters I would rather see live on beyond this series — like they’re developing this idea for Cheyenne and Bo. We’re at a place in history where a relatively privileged, foot-in-mouth, bumbling middle-aged white guy is not necessarily the show anybody wants to watch anymore, and I’m happy to not be that. [Laughs] 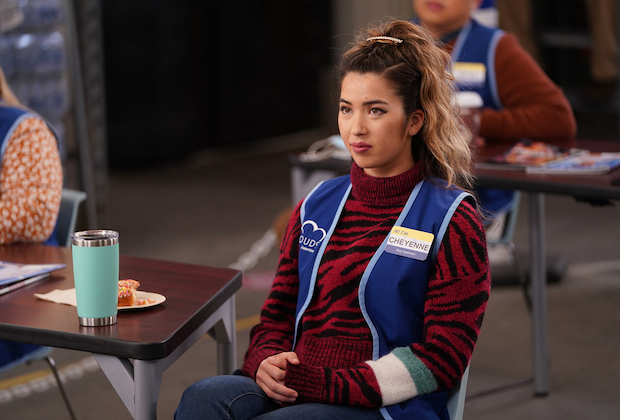 TVLINE | It’s been a few months since it was first announced that NBC was developing Bo & Cheyenne. Any update on the potential spinoff?
GREEN | It’s still in the early stages of development. That’s probably all we can really say… We’re not directly involved.
MILLER | They’re working on a script, is all we know.

What did you think of Superstore‘s series finale? Grade via the following poll, then drop a comment with your full review.