So much for Grey’s Anatomy’s Giacomo Gianniotti going “back to being DeLuca.” Thursday’s midseason premiere, which continued the story that was begun on Station 19 (recapped here), not only stuck a scalpel in Andrew, it stuck a fork in him. Read on, and we’ll go over the harrowing developments that made him a permanent resident of Meredith’s limbo beach.

‘THIS WAS A PEP-TALK PAGE’ | As “Helplessly Hoping” began, while DeLuca was wheeled into Grey Sloan and immediately into surgery, Levi got a glimpse of Opal on Ben’s cell and realized that maybe he could have done something to have prevented this situation. D’oh! If Schmitt really wanted to help his colleague, Nico advised, he wouldn’t scrub in, he’d get a surgeon for DeLuca who wasn’t a wreck. Harsh-ish, yes, but also true. After Helm got an eyeful of a worse-for-wear Andrew, the shaken resident reported the news to Richard, whose offer to scrub in was rejected by Owen; what he was about to do was akin to what he and Teddy had done on the regular in Iraq — he needed her. In the O.R., Owen and Teddy worked well together to save DeLuca with the help of Reza Khan, a newish intern with experience in vascular surgery in Pakistan. All the while, Richard watched over the proceedings. “Please,” he whispered, “don’t take this boy.”

In the hospital chapel, Carina told Maya that before her and Andrea’s mother had died, she’d called them two halves of one whole. And they were, so much so that when Mama could only afford one pair of roller skates for Christmas (after Papa blew all their dough on nonsense), the siblings each wore one skate and rolled around like flamingoes attached at the hip. Post-surgery, Teddy thanked Owen for calling her in. But they weren’t actually getting along as well as she thought. “Don’t read into it,” he huffed (and understandably). Visiting Tom, aka the one person who could stand her anymore, Teddy refused to give him the only thing he wanted: the sound of her voice saying that she hadn’t loved him. And she hadn’t, he noted. If she had, now that Owen wanted nothing to do with her, they’d be together. So please, could she just say it, because, as Korackick put it, if he survived COVID, “I wanna get up off the ground where ya dropped me.” Finally, she did utter the words that he needed to hear. 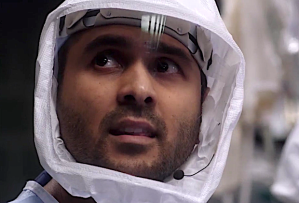 ‘YOUR SISTER LEFT STRICT INSTRUCTIONS: NO CAR CHASES’ | At limbo beach with Meredith, DeLuca told Grey that he didn’t regret going after Opal. So often, people just looked the other way. But the same as she had when she’d risked her license to save a little girl, he’d had to chase the sex trafficker, consequences be damned. “It’s the only thing that made sense.” Back in real life, all of Andrew’s monitors seemed to go off at once. Bring me a staple remover, yelled Owen. And wire cutters! And horrifically, DeLuca was torn back open and taken to surgery. On the beach, Andrew found that he couldn’t build his sand castle fast enough to beat the tide. “I don’t know what happens from here,” he told Meredith, “but no matter what happens, I want you to know I’ve never felt seen like you saw me.” Suddenly, a voice called out — his mother! Mer would miss him if he stayed and she went back, she said. Nonetheless, “I have to go,” he replied. With that, he ran to his Mama and was finally pronounced dead back at Grey Sloan… by Khan, since neither Owen nor Teddy could bring themselves to do it. Deep sigh. 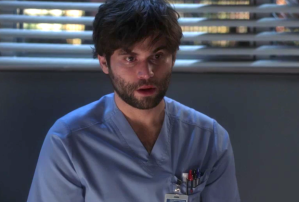 In other developments, Jo had finally convinced Cormac to allow Val a visit with newborn Luna when… aw, crap. Val died. And was it just me, or from the way Jo was holding that baby’s hand (or vice versa) in her last scene, wasn’t an adoption in the offing? (For that matter, is anyone else feeling a Cormac/Jo/Jackson triangle?) Later, when Levi told Nico that Val had died and wondered if he’d “wasted all the time I was supposed to be happy” being closeted, instead of calling him a Debbie Downer as you’d expect he would, the ortho hunk actually comforted his booty call. Speaking of which, Winston and Maggie spent the first chunk of the episode canoodling in a hotel room and making inadvertent plans for their longterm future. Back at Casa Grey, Amelia was spiraling… aloud… in such a way that Zola came to fear her mom was going to die. Desperate to bring Maggie home, Link sent, of all people, Jackson to retrieve her. Once back with her “sister,” Maggie reminded Amelia that Mer had told the kids about Derek. So “we can do this for her.” Finally, Amelia and Maggie let Zola know that they really didn’t know if her mom was going to get taken off a ventilator. They didn’t know if she was going to be OK. And a true Grey to the core, Zola woman’d up, saying, “We shouldn’t tell Bailey and Ellis, not unless we need to.”

All together now: deep sigh, the sequel. What did you think of DeLuca’s swan song? Grade the episode in the poll below, then see what his portrayer had to say about it — and find out why showrunner Krista Vernoff killed him off.