Warning: If you haven’t watched the midseason premiere of Grey’s Anatomy yet, you might wanna do so before reading the spoiler-filled interview below.

Watching Thursday’s Grey’s Anatomy (recapped here), we didn’t blame Owen and Teddy one bit for not wanting to call time of death on DeLuca. We didn’t want them to, either. Nonetheless, the ABC drama’s midseason premiere marked the end of the line for Giacomo Gianniotti and the character he’d played since Season 11… or did it? Here, the actor not only reveals the reason DeLuca’s romance with Meredith stalled, he cops to misleading viewers and hints that we may not have seen the last of Andrew.

TVLINE | Let’s start at the beginning of the end. How did you find out DeLuca was being killed off?
I was called into our executive producer Debbie Allen’s office, and she and our showrunner Krista Vernoff said, “We want to talk to you, Giacomo.”

TVLINE | Uh-oh.
So I sat down, and they very quickly explained to me that the writers had been going back and forth and kept landing on the same point, which they all believed was a really, really beautiful storyline that ended, unfortunately with DeLuca’s demise.

TVLINE | What did you say?
I said, “Can you tell me more?” and Krista started talking about how much people had connected to the human trafficking story from last season and that everybody was begging for it to be wrapped up. So they said, “We all thought it was very clear that we need that storyline to come back, and it would be great if we could catch that human trafficker and show that people like that can be stood up to.” In that was an opportunity for DeLuca to be brave and die as a hero. So even though it’s a tragic loss, he’s stopping this trafficking. 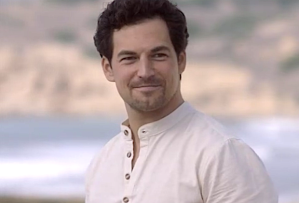 TVLINE | It’s ironic that in this time of COVID, DeLuca dies of something… totally unrelated.
We talked about the fact that a lot of people have lost loved ones this year, due to COVID and a lot of other things, and this was an opportunity to allow people to mourn their loss through the loss of a fictional character. There could be a lot of catharsis through that. So we all talked about it, and I felt very strongly about the storyline and said, “OK, let’s do this.”

TVLINE | So after you got over the shock of being told you were being written off, you were excited.
Exactly. I mean, at the end of the day, I’m a storyteller. Whether you’re an actor or a director — now I’m starting to direct, I just wrapped on Grey’s Anatomy — the story has to win.

TVLINE | Speaking of your directorial debut, were you told you’d be getting to helm an episode at the same time you were told you were being let go — like, “But here’s a lovely consolation prize”?
No, that had already been predetermined the previous year. Usually, we book our directors a year in advance, so I was already slated for that.

TVLINE | After you wrapped on the episode you directed, you Instagrammed, “Now back to being DeLuca.” Were you deliberately trying to mislead fans?
I was just trying to throw people a little off the scent a bit. It’s not a lie, though, in that we might see DeLuca in the future. There are other opportunities for him [to appear] for the rest of the season. And lots of characters that have been lost over the years have come back, whether in flashbacks or playing little home videos on our phones, ghosts, sometimes dreams. There’s all kinds of ways. 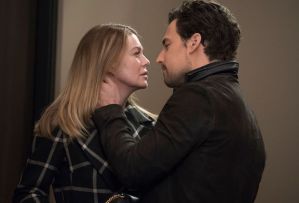 TVLINE | Do you feel any disappointment that DeLuca didn’t turn out to be endgame for Meredith?
I think it was a very valuable relationship for both parties. But you know, I’ve had people in my life who have lost their partners [as Meredith did Derek] and had to move on. They’ve met other people and fallen in love, but there’s always that little hole in their heart that can’t quite be filled. There’s nothing that can replace that person they lost. So I think it was a beautiful thing to have Meredith see Derek again in her dreams.

TVLINE | Do you have any sense of why the show pivoted away from MerLuca?
Well, the big reason is because Meredith got COVID. If that hadn’t happened, she and DeLuca would have been able to sort of pick up where they left off. In the beginning of the season, there was the possibility for them to see if there was a road back to where they were in their romance. But she gets COVID, so of course, all of that is pushed aside. The main focus is to just save her life. 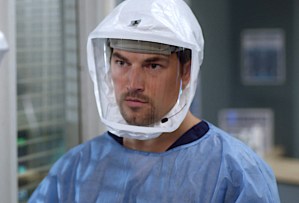 TVLINE | Is there anything that you didn’t get to do as DeLuca, or would have liked to have done more of, that you didn’t?
It would have been cool to see what he could have accomplished as an attending, when he was really in charge and not having to sort of defer to a superior. I also would have liked to have kept telling the story of someone who is bipolar in a very, very commanding position and show that those things are possible for people. That was the proudest moment for me as an actor, to get to play someone who is suffering in that way, having such a high-level position.

TVLINE | Any message for the viewers who are going to be gutted by DeLuca’s death?
I just want to thank them, for loving this show so much and connecting with my character. They are an amazing, amazing group of people who just love the show so fiercely, and I’m grateful to have been a part of it all these years.