Saved by the Bell‘s Season 1 finale serves up more questions than it does answers. For instance, was Tori Scott just a fever dream? A figment of Zack Morris’ heightened imagination used to fill the void when Kelly Kapowski and Jessie Spano disappeared for large swaths of senior year?

The Peacock revival references Leanna Creel’s leather jacket-clad character, who appeared in a grand total of 10 episodes throughout the original series’ final season, only never to be seen or heard from again. The namedrop comes just minutes into Episode 10, as Mac fills his parents in on the PTA’s efforts to have Douglas High students (including Daisy, Aisha and Devante) removed from Bayside:

Zack: Those parents suck. You know, the Douglas kids deserve to go to a great school like Bayside. Besides, new kids keep things fresh. Remember Tori?

Poor Zack is left to wonder whether he dreamt up Tori, as he did that Zack Attack rockumentary hosted by Casey Kasem. The episode also references Kelly’s ex-boyfriend Jeff, planting a hiiiiiiighly unlikely paternity twist, and runs down just some of the ways Zack Morris was trash in high school. 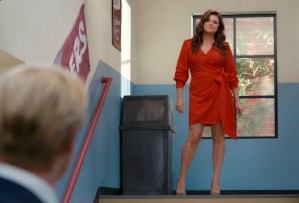 Among the examples cited by Kelly: that time he sold toxic face cream; that time he distributed a swimsuit calendar of Kelly, Jessie and Lisa without their permission; and that time he nearly had Screech dissected by the U.S. government.

In the end, all it takes is Kelly in a red cocktail dress to convince Gov. Morris to step up and protect Mac’s new friends. After initially using their student walkout as a photo op, Zack heads back out to confront the press and announce a new executive order, putting a three-year freeze on all school openings and closures. In doing so, he also puts his reelection bid at risk, which means he may have to go back to being a “hot lawyer” instead. 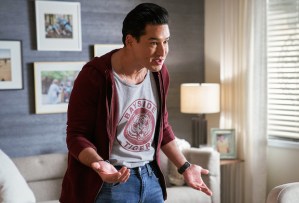 The finale also sees Slater reckon with his chauvinistic past. After he sees the work that goes into the student walkout, he apologies to Mama — err, Dr. Mama — err, Jessie, for the way he treated her back in high school when she showed similar initiative. That apology gives Jessie the motivation she needs to stand up to Rene. When her inferior half shows up at her office and hands her a caffeinated beverage in a complete disregard of her 30 years of sobriety, she finally tells her “narcissistic, fake-woke, dreamcatcher, tattoo-having, homemade-jerky-smelling dumbass” of a husband to take a hike.  When Rene counters, saying, “I don’t even know who you are anymore,” Jessie makes herself crystal clear: “I’m Jessie F—king Spano! Now, get out of my office.”

When speaking to TVLine ahead of SBTB‘s return, portrayer Elizabeth Berkley Lauren hinted at Jessie’s big finale moment. “It’s fun to play someone who seemingly has it all together [attempt] to keep it together, the way Jessie did in the ‘I’m so excited’ episode,” she said. “But now, circa 2020, she’s finding her fight again. It’s not that Jessie lost it, but she’s reconnecting to that part of herself… She’s getting her fire back.” 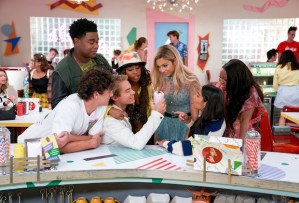 In the end, everyone gathers at The Max to celebrate the Douglas kids staying put at Bayside. Daisy tells Mac that she’s looking forward to getting to be “a normal kid at Bayside for a while,” without having to come up against any other “insurmountable obstacles,” and ultimately jinxes herself (and the world). Within seconds, Mac receives an alert on his phone that suggests the coronavirus pandemic is about to wreak havoc on all their lives. And here we thought the May 14 earthquake was the biggest thing these Californians had to worry about!

What did you think of the Saved by the Bell finale — and the first revival season overall? Weigh in via the following polls, then drop your thoughts in a comment below.