Peacock’s Saved by the Bell revival introduces a whole new generation of Bayside students, including Zack and Kelly’s slacker son Mac, Jessie’s dimwitted spawn Jamie, and our new protagonist Daisy, who inherits Preppy’s fourth wall-breaking abilities. But none of them make a bigger first impression than mysterious loner Devante, who belts out a Whitney Houston classic in the premiere’s final scene.

Throughout Episode 1, athletic director A.C. Slater tries to convince the Douglas High transplant to join the football team, but his interests lie elsewhere. Rather than attend tryouts, Devante makes a beeline for the drama department and auditions for the school musical. He blows the director away with his rendition of “Greatest Love of All” — a song originally recorded by George Benson, but popularized by Houston — and earns a starring role in the play. 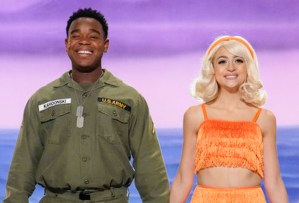 “[Executive producer] Tracey Wigfield had an idea that she really wanted to portray, in terms of having a kid from the inner city who people immediately assume wants to be on the football team, but has an alternative interest,” his portrayer Dexter Darden recalls. “When I auditioned for the role, I had the opportunity to sing, and I remember singing in front of Tracey and Elizabeth [Berkley Lauren]. Music is just a big part of my life, so having the [chance] to bring it out on screen was really important [to me].”

Devante begins to come out of his shell in subsequent episodes. We learn that he had a bad reputation at his former school, and is determined to reinvent himself at Bayside. His home life is also complicated: With both of his parents gone, it’s up to him to look after his sickly grandmother.

“I didn’t know that that’s where [his backstory] was going to go, but I was really excited when Devante started to evolve in that kind of way,” Darden tells TVLine. “I feel so close to Devante in the sense of constantly being misunderstood because how you look or where you come from.

“I think that Saved by the Bell, especially with what we’re doing now with this first season, is really providing a chance for people to put their feet in other people’s shoes,” he says, “to look in the mirror and say, ‘OK, let me check with myself and see how I’m perceiving [others].'”

Were you stunned when Devante revealed his killer pipes at the end of the Saved by the Bell premiere? And who among the newbies is your favorite thus far?