The Saved by the Bell franchise’s 20-year timeout came to an end with Wednesday’s debut of the highly anticipated revival, which follows a new generation at Bayside and catches up with the Class of ’93.

The new SBTB immediately establishes a more tongue-in-cheek tone. A political ad for California governor Zack Morris reveals that the beloved slacker went on to become a successful trial attorney, then shows a photo of Mark-Paul Gosselaar on the TNT legal dramedy Franklin & Bash. 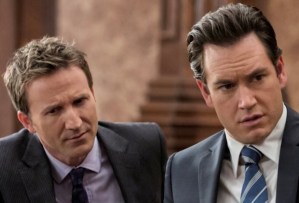 “I don’t remember whose idea [the Franklin & Bash reference] was, but I would love to take credit for it,” showrunner Tracey Wigfield says with a laugh. “We talked a lot [in the writers’ room] about how that would be funny because I don’t know which one [Gosselaar] was, whether he was Franklin or Bash.”

As a general rule, Wigfield says that the revival doesn’t go out of its way to reference the cast’s post-SBTB careers, a decision that was heavily influenced by the creative failure of 2019’s Beverly Hills, 90210 sorta-revival. “I enjoyed [BH90210] because I knew a lot about what [the cast] had been up to after the show, but it was a little bit inside in a way that I wanted to avoid,” Wigfield says. “It felt hard to understand, or hard to find a way in if, say, you didn’t know that Gabrielle Carteris is the president of the Screen Actors Guild, which most people do not know…

“We have a lot of winky stuff,” Wigfield promises, “but you don’t have to have read Deadline [and know] what Mario Lopez has been doing.” You need only be familiar with the original series to pick up on the pilot’s many Easter eggs, including references to Bayside’s longtime rival Valley, Jessie’s caffeine-pill bender (the title of her best-selling parenting book is I’m So Excited, I’m So Scared… of Becoming a Parent), and the Malibu Sands Beach Club episodes (the beach volleyball sign-up sheets distinguish between a regular league and a “Resort Sand” league).

The rest of the premiere focuses on what happens after Gov. Morris closes too many low-income high schools, then attempts to fix the problem he created by sending the affected students to some of the most affluent schools in the state, including Bayside High. Over at his alma mater, Principal Toddman (Great News‘ John Michael Higgins), guidance counselor Jessie and athletic director A.C. Slater try to make the new kids feel as welcome as possible, though that’s easier said than done. 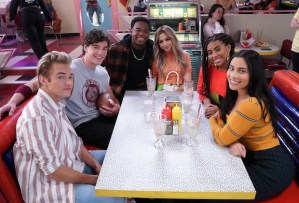 Among the transplants are our new protagonist, Daisy (The Birch‘s Haskiri Velazquez), who inherits Zack’s fourth wall-breaking abilities (along with his brick phone) and makes a run for sophomore class president; her best friend Aisha (Chase‘s Alycia Pascual-Pena), who has an easier time acclimating and tries out for Bayside’s football team; and Devante (The Binge‘s Dexter Darden), who Slater wrongfully assumes is an athlete, but is actually a theater nerd with a voice of gold. Upon their arrival, each of the newbies gets paired with a “Bayside Buddy” — Daisy with Zack and Kelly’s son Mac (Roswell, New Mexico‘s Mitchell Hoog); Aisha with Jessie’s son Jamie (Empire‘s Belmont Cameli); and Devante with mean girl Lexi (Champions‘ Josie Totah) — to help get them situated, and before long, the entire “new class” has befriended one another. They even convene at The Max for a round of Bayside burgers, which are doled out by the cafe’s veteran namesake proprietor.

TVLine has already shared its review of the new Saved by the Bell, so now it’s your turn: What did you think of the revival’s first episode? And will you continue watching? Weigh in via the following polls, then hit the comments to flesh out your thoughts.