If you’re a TV viewer of a certain vintage (like me), Saved by the Bell imprinted on you at an early age, whether you liked it or not. (In our defense, there wasn’t much TV to choose from back then.) Yes, the cheesy ’90s high school antics of Zack, Kelly, Slater, et al do have a certain nostalgic allure… but they were never “good,” really. So it’s a nice surprise that the Saved by the Bell revival — debuting Wednesday, Nov. 25 on Peacock; I’ve seen three episodes — is actually, surprisingly good: a cleverly constructed, highly tongue-in-cheek reinvention that pokes plenty of fun at its inspiration while finding genuine laughs of its own.

Several decades after we last walked the halls of Bayside High, teen prankster Zack Morris (Mark-Paul Gosselaar) is now the governor of California — he only ran in the first place to get out of parking tickets — and faces a serious budget crunch, with overcrowded schools being forced to shut down. (“You can learn everything you need on the Internet,” an outgoing teacher reassures his stranded students.) Zack decides to ship these students off to well-funded schools… like his alma mater Bayside High, where Jessie Spano (Elizabeth Berkley Lauren) is now the school counselor, and A.C. Slater (Mario Lopez) is the gym teacher/football coach. (She’s married to someone else, but he still tries to call her “mama.”) 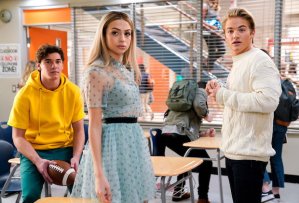 The revival’s Bayside High is a comedic triumph: a cheerfully clueless time warp where the students are insanely rich, insanely privileged and fond of harmless sitcom hi-jinks. Zack’s son Mac (Mitchell Hoog) is a preppy clone of his dad, and Jessie’s son Jamie (Belmont Cameli) is a Slater-esque jock, with Hoog and Cameli making an appealing pair of lunkheads. In a perfect bit of casting, comedy veteran John Michael Higgins plays the harried, pitiful Principal Toddman, who ends up living out of his office after his wife kicks him out. A major culture clash ensues when the new students from less affluent schools arrive; when newbie Daisy (Haskiri Velazquez) tries to run for class president, she has to go up against kids endorsed by LeBron James and a Kardashian. (OK, it’s Rob, but still.)

The not-so-secret weapon here is writer/executive producer Tracey Wigfield, who won a writing Emmy for 30 Rock before creating the severely underrated Great News, which featured Higgins and lasted just a pair of seasons on NBC. She’s got a real knack for rapid-fire punchlines, and she gives this revival a fun, Brady Bunch Movie vibe: goofy and self-deprecating, with lots of knowing winks to fans. The teens’ hangout The Max is exactly like we remember, to an unsettling degree, complete with pay phone and original owner Max still slinging burgers and shakes. (“You guys go to a sit-down restaurant every day? Isn’t that expensive?” “Yeah!”) It taps into the same retro vein as Netflix’s Cobra Kai, paying homage to a beloved classic and also bringing it into the present; Slater clings to his rapidly fading glory days in the same strangely poignant way that Cobra Kai‘s Johnny Lawrence does.

But make no mistake: The new teens take center stage here. (Gosselaar only makes a few cameos, and Daisy handles the fourth-wall-breaking timeouts now.) The teen dynamics are a little familiar at times, but the revival dares to tackle class disparity and white privilege while playfully mocking the original’s consequence-free low stakes. It still has heartfelt inspirational speeches… but it makes fun of them at the same time. Plenty of longtime SBTB fans are bound to tune in just to see their old favorites together again — and the revival does reward that instinct — but they might end up sticking around to see where Bayside’s new class is headed, too.

THE TVLINE BOTTOM LINE: Get so excited, Saved by the Bell fans: Peacock’s revival is surprisingly good, putting a clever, self-referential spin on the beloved series.